Plenty of challenges ahead for new board
Exclusive Columns 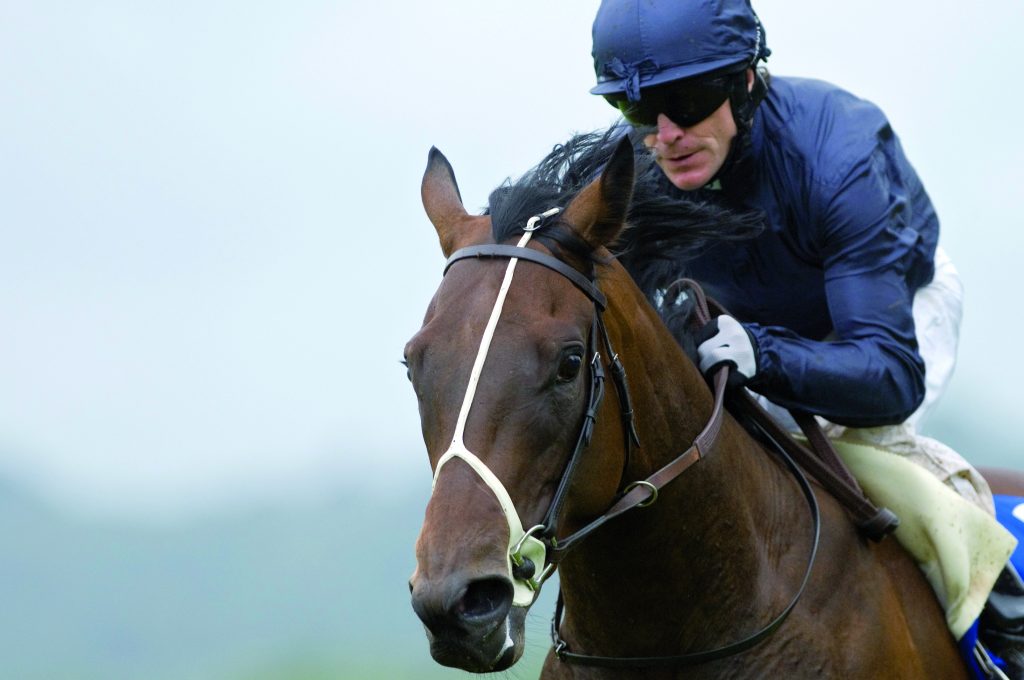 Myboycharlie started at the National Stud but is now in France and shuttles to Australia. Photo: George Selwyn

On May 29, at the Magic Millions National Broodmare Sale on Australia’s Gold Coast, there was plenty of excitement when the five-year-old Jameka entered the ring. After all, since being bought for AUS$130,000 as a yearling, Jameka had won three Group 1 races, including the 2016 Caulfield Cup by three lengths and the 2017 ATC BMW Stakes by more than six lengths.

Her earnings stood at an enviable AUS$4.87 million and it took AUS$2.6m to buy the mare, who had been rated the second-best three-year-old filly of 2015-16 and the second-best older filly, behind the mighty Winx, in 2016-17.

Then, some months later on another continent, the former French-trained Sistercharlie recorded her second and third Grade 1 victories of the year when she narrowly landed Saratoga’s Diana Stakes, followed three weeks later by the Beverly D Stakes at Arlington.

Sistercharlie is therefore already well placed to take high rank among America’s top turf fillies and this win improved her record to six wins and three seconds from only ten starts. One of those seconds came behind Senga in the 2017 Prix de Diane.

By now you may well have worked out the link between these two high-class racemares – both are daughters of the former National Stud stallion Myboycharlie.

This spectacular rise in the filly’s value was the result of three years of smart performances, including a victory in the Grade 1 Beverly D Stakes in 2014. Now owned by Katsumi Yoshida, Euro Charline produced her first foal, a filly by Arc runner-up Orfevre, in February 2018.

Yet another Group 1-winning daughter of Myboycharlie is Peggy Jean, a Sires’ Produce Stakes winner who was sold at the 2016 Magic Millions National Broodmare Sale for AUS$1m. Another cheap purchase as a youngster, Peggy Jean now has young progeny by those highly fashionable stallions I Am Invicible and Medaglia d’Oro.

The extraordinary aspect of Myboycharlie’s Group/Grade 1 exploits as a stallion in two hemispheres is that, even now, he has never stood for more than £5,500 in his eight European seasons.

It is a similar story in Australia, where his nine seasons have been spent at fees ranging from AUS$8,800 to AUS$16,500. Because he remained in Australia in 2016, he has no yearlings in Europe this year and at present he has fewer than 30 2018 foals registered with France Galop.

Hopefully the 2017 exploits of Sistercharlie, which also included a win in the Group 3 Prix Penelope and a second in the Grade 1 Belmont Oaks Invitational, will have been rewarded with greater demand for Myboycharlie’s services at only €5,000 at Haras du Mezeray this year.

Sistercharlie is the second Prix Penelope winner by Myboycharlie, following Camprock, who was winning for the third time in three starts when she landed this Group 3 in 2016.

Camprock nearly became another Group 1 winner for her sire, failing by only a head to take the Prix Saint-Alary. Like Euro Charline, Camprock has also been sold to Japan, where her first foal is a 2018 colt by the great Deep Impact.

It is a pertinent question to ask why Myboycharlie has been labouring at the lower end of the market. I would suggest that there were two sizeable obstacles barring his way to widespread popularity.

One was that his sire Danetime carried the stigma of never having won a stakes race and the other was that Myboycharlie’s racing career had ended not with a bang but a whimper.

Of course his racing career had started extremely well. Bought by Fozzy Stack for 54,000gns at Doncaster, the son of Danetime proved to be exactly the type of quick-maturing two-year-old in which the Doncaster sale specialises.

A debut winner at the Curragh at the end of June, he reappeared 15 days later to take the Group 3 Anglesey Stakes by seven lengths from the future American Grade 1 winner Tuscan Evening.

He then accounted for another notable filly – the future Cheveley Park Stakes and 1,000 Guineas winner Natagora – in taking the Prix Morny by two lengths.

All three of his wins had been gained on soft or heavy ground but it was fast when he vied for favouritism with New Approach and Rio De La Plata in the National Stakes.

In the circumstances Myboycharlie wasn’t disgraced in finishing third, but the effort seemed to convince his connections that he was a sprinter rather than a potential Guineas horse.

Perhaps they were wrong, as Sistercharlie, Jameka and Euro Charline have all won at nine and a half furlongs or more, and Myboycharlie disappointed in both of his three-year-old starts in Ireland, the first over six furlongs and the second over five.

Maybe he had a problem, as he ended his three-year-old season with three starts in the US, where he won over a mile at Fair Grounds in Louisiana towards the end of 2008.

By April 9, 2009 Myboycharlie had been transferred to Australia and he covered his first mares at Vinery later that year before being returned to Europe to make his debut at the National Stud in 2010.

With his British stud debut coming nearly three years after his Morny triumph, and memories being short, it was no surprise to see him attract no more than 68 mares in his first season and 61 in his second. When he next returned to Europe, it was to France, the scene of his finest victory.

The perversity of the market is underlined by the welcome accorded to Bushranger, another Danetime colt who won the Prix Morny a year after Myboycharlie.

Admittedly Bushranger also won the Middle Park Stakes but he too disappointed at three, never managing to reach the first three in Group 1 sprints before being retired to Tally-Ho Stud.

It was at Tally-Ho that Danetime had been developing into a very effective stallion before his untimely death as an 11-year-old in 2005, and it was also at Tally-Ho that Kodiac, another non-stakes-winning son of Danehill, has undergone an even more dramatic transformation.

These precedents encouraged breeders, in lemming-like style, to entrust Bushranger with 184 mares in his first season, 155 in his second and 210 in his third. The market couldn’t get enough of his first-crop sons but the bubble soon burst and he is now based in Turkey.

Coincidentally, Bushranger also has a Grade 1-winning daughter running in the US this year, as the former Scottish-trained mare Sophie P has won the Gamely Stakes at Santa Anita.

This adds up to a greater legacy from Danetime than could reasonably have been expected at the time of his death in Western Australia in September 2005. He had stood the 2005 Irish season at a fee of €6,500 but was to enjoy considerable posthumous success.

Still succeeding in the wings

It is hard to imagine now, after the exploits of Montjeu and Galileo, that there was a time when breeders questioned Sadler’s Wells’s ability as a sire of sires. Certainly there were some notable disappointments, such as Entrepreneur, King Of Kings, Old Vic, Saddlers’ Hall and King’s Theatre, with the last three all ending up in the National Hunt sector.

But the early sons also included the likes of Barathea and In The Wings, a pair who maintained a high standard throughout their fairly lengthy careers.

Like Galileo and Montjeu, In The Wings was a true mile-and-a-half horse, as he proved with his Group 1 wins in the Coronation Cup, Grand Prix de Saint-Cloud and the Breeders’ Cup Turf as a four-year-old.

In The Wings also faced a widespread bias against small horses, as he stood only 15.11/2hh, but – like his grandsire Northern Dancer before him – he was to show that size isn’t always an issue.

Making his stallion debut in the early nineties, In The Wings covered small books by today’s standards, with only 151 foals in his first four crops. However, his first crop contained the international star Singspiel and the Irish Derby winner Winged Love and 11 of these 151 foals became Group winners (7.2%).

He ended up with ten Group 1 winners and his total of 35 Group winners from a total of 721 foals represented a highly respectable 4.9%.

Sadly, In The Wings’s male line is virtually extinct in the Anglo-Irish Flat industry, but it has been a very different story in Germany.

In The Wings was responsible for the 2007 Deutsches Derby winner Adlerflug and another of his German sons, the three-time champion older horse Soldier Hollow, sired the 2012 winner Pastorius and the latest winner Weltstar.

Because Soldier Hollow raced until he was seven, he is already approaching veteran status as he was born in 2000. Even so, he still has only 394 foals of racing age in his first eight crops, while the four-year-younger Adlerflug has only 160 in his first six crops. These low totals reflect the comparative smallness of today’s German industry.

The flashy Adlerflug has 11 black-type winners among his 160 foals and he commands a fee of €15,000 at Gestut Schlenderhan.

Soldier Hollow has 25 black-type winners and his ability to sire Group 1 winners of the calibre of Weltstar, Pastorius, Dschingis Secret, Ivanhowe and the Preis der Diana winner Serienholde has established this Gestut Auenquelle resident as Germany’s premier stallion. He now commands a fee of €25,000, having started out at €6,500.

Ivanhowe, Germany’s champion older horse of 2014, when he took a pair of Group 1 races over a mile and a half, went on to win two ten-furlong Group 1 races in Australia and is now standing at Haras du Thenney in France. Pastorius is also now based in France at Haras de la Hetraie, where the emphasis is on jumping.

Up Next
Plenty of challenges ahead for new board