The debate of supplying official times at breeze-up sales continues to spark plenty of lively chat. Times have long been part and parcel of the American two-year-old sales scene but in Europe, such data remains the domain of the handful willing to carry out the analysis themselves, in most cases a clutch of determined bloodstock agents.

It is a subject that continues to drive a divide through the sector. You don’t need to be a rocket scientist to deduce that fast times mean big prices, as long as the horse isn’t hopping lame coming out of its breeze. Even allowing for the fact that some breezers are bred to come into their own as older horses, slower horses are still harder to shift.

Correct interpretation of any data is key and while plenty of buyers possess the means and understanding to do so effectively, there is some weight to the thought circulating within various consignor circles that official publication of times will prompt a further polarisation of the market.

“Is there a big difference between 22.1 and 22.7?” he asked. “The ground can effect certain horses, but anything can go wrong – all it takes is for a horse to have a little look around and his time is gone. My best horse last year, a colt by Medaglia d’Oro, happened to get hit by a massive headwind during his breeze. That cost him a second and a half, so instead of being in the top 20, he was in the top 40 or 50.

“Official times will take on a greater importance”

“Of course the clock has a place if you’re looking for an Ascot two-year-old. But there’s no point expecting a fast horse if he’s by Authorized and out of a Sea The Stars mare – what does the clock mean there? Nothing. If he does a fast time, people think he must be brilliant. No, he’s confused.”

Given the current climate and the looming possibility of selling breezers at the delayed breeze-up sales behind closed doors, it will become necessary for consignors to increase their data output to the wider world, whether it be a horse’s weight, height and stride length in addition to its breeze time. Suddenly official times will take on a greater importance.

Derby runner-up Libertarian is widely quoted as a Group 1 performer who clocked a slow time at his breeze, in his case ahead of the 2012 Tattersalls Craven Sale where he made 40,000gns to Lars Kelp.

Only last week, memories of another similarly slow breezer were evoked by the impressive winning performance of the British-bred Magic Attitude in the Prix Vanteaux at Longchamp. The Fabrice Chappet-trained filly is the second Group winner from as many runners out of the top sprinter Margot Did, a daughter of Exceed And Excel who made a mockery of her 10,000gns breeze-up price tag for Michael Bell thanks to five victories headed by the 2011 Nunthorpe Stakes.

By all accounts, Margot Did came up the Rowley Mile ahead of her date at the 2010 Tattersalls Guineas Breeze-Up Sale in a distracted fashion. Richard Frisby, however, took a chance and at 10,000gns, owners Tim Redman and Peter Phillips came into possession of a filly who would go on to earn over £250,000 before selling privately to Coolmore-based interests.

Less than a month following her sale, Margot Did made an impressive winning debut at Newbury. She followed up in a novice in Yarmouth before going on to fill the frame in the Albany, Princess Margaret, Lowther and Dick Poole Stakes.

Margot Did forged an excellent partnership with Hayley Turner during that first season and it was again under Turner that she turned in her best performances the following year, notably when winning the Nunthorpe Stakes at York. Victories in the Scurry and Land O’Burns Fillies Stakes also came her way.

Despite her lowly price tag, Margot Did actually possesses some fine connections, particularly as a daughter of successful Darley shuttler Exceed And Excel, whose northern hemisphere fee hasn’t dropped below £22,500 since 2012. Responsible for 15 Group 1 winners overall, Margot Did is one of three by the son of Danehill to have struck at the top level in the northern hemisphere alongside Excelebration and Outstrip.

Margot Did was bred by Nicky Hartery out of the Shareef Dancer mare Special Dancer, a triple winner in Italy who was deemed good enough to contest the 2000 Italian Oaks. In turn, Special Dancer is a half-sister to the Aga Khan’s 1994 Meld Stakes winner Cajarian and to the dam of 2006 Prix de la Foret scorer Caradak.

Associated in recent generations with the Aga Khan Studs, this family is an old Boussac line that goes back to the textile magnate’s 1950 Irish Oaks and Poule d’Essai des Pouliches heroine Corejada via her champion and dual Classic-winning daughter Apollonia.

Towards the end of 2012, Margot Did was acquired privately by Richard Henry’s Premier Bloodstock. By that stage, it was apparent that Galileo was working with faster mares more efficiently than his sire Sadler’s Wells ever did, and indeed Margot Did has gone on to become a key element in providing further proof of that trend.

Her first foal was the Galileo filly Mission Impassible, who won a Listed race and ran third in the Prix Marcel Boussac in the colours of Riviera Equine as a two-year-old in 2017. She was even better at three for Jean-Claude Rouget when her performances included a victory in the Prix de Sandringham at Chantilly and runner-up effort to the top American filly Rushing Fall in the Queen Elizabeth II Challenge Cup at Keeneland.

By that stage, Margot Did was under new ownership having changed hands to Katsumi Yoshida of Northern Farm; Magic Attitude is the first foal out of the mare for the breeder.

Foaled in Britain, Magic Attitude was offered through the Haras d’Etreham draft at the 2018 Arqana August Sale but failed to sell at €850,000. A private deal was evidently struck, however, since Magic Attitude currently races for the partnership of Haras de Saubouas, Haras d’Etreham, Nicolas de Chambure and Marie-Therese Dubuc-Grassa.

And given Magic Attitude’s authoritative win over the highly regarded Emoji in Thursday’s Prix Vanteaux – her second win in four starts and one that saw her introduced at 12/1 for the Prix de Diane – it would appear to be money well spent. Indeed, judging by the turn of foot she produced to seal victory on Thursday, Group 1 targets are realistic.

In the process, Magic Attitude became the 314th stakes winner for Coolmore’s colossus Galileo and another current advert for the Galileo – Exceed And Excel cross, one that also includes last year’s Derby hero, Anthony Van Dyck.

Margot Did now resides in Japan, where she has a two-year-old Frankel colt that made 226,800,000yen (£1,750,000) at last year’s JRHA Select Sale to Kaneko Makoto Holdings; the figure was enough to see him end the yearling section as the seventh highest price of the day. She also has a yearling colt by Heart’s Cry and was due to foal back to that leading sire this year. 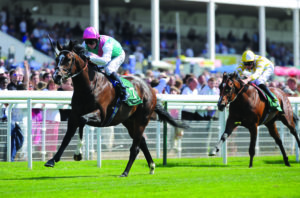