Makin hoping for a National winner

With most of the major yearling sales having now concluded, the main message received from the results is that less equals more. The sales which bowed to consignor demand for more places and added an extra day have struggled, while a fairly significant trimming of Books 2 and 3 at Tattersalls’ October Sale has helped not only the company’s figures but those on the frontline trying to show and view a huge number of yearlings in a short space of time.

Book 1 of October has long been the front-runner of the European yearling season and this year was even the subject of a special BBC World Service documentary. Sharing the stage as the leading lights of the sale were two colts by Dubawi, both of whom were offered by British owner-breeders, with Meon Valley Stud’s son of Zee Zee Top being sold for 2,600,000gns, the same price paid for a son of another Group 1 winner, Fallen For You.

The latter marked a successful return to the sales-ring after a ten-year absence for Philippa Cooper, who consigned a select offering from her Normandie Stud through Norris Bloodstock.

Early-season concerns surrounding a perceived non-participation in the yearling market by Godolphin were resolutely soothed by John Ferguson’s outlay on Sheikh Mohammed’s behalf of almost 17,000,000gns through Books 1 and 2, while his brother Sheikh Hamdan spent 14,000,000gns.

These sums were backed up by fairly major participation from the Rabbah associates, and from Sheikh Mohammed Obaid, whose trainer Roger Varian was the underbidder on both best-selling Dubawi colts.

For those spending a lot of time in sales rings, the dragged-out process of bringing a horse up to its reserve price can be frustrating, which was why the return of a certain flamboyant Australian was refreshing indeed. Welcome back Paul Makin, who upped the stakes significantly in the race to take home Glenvale Stud’s full-sister to treble Group 1 winner Alice Springs by wading straight in with a bid of 1,000,000gns and then, when bidding stalled at 1,600,000gns, offering the bold riposte of 2,000,000gns.

Unsurprisingly, he was thwarted in his attempt by MV Magnier, who continued the Coolmore buying partnership with Mayfair Speculators during Book 1, with this filly being the team’s biggest purchase. Makin did, however, succeed in securing a Lope De Vega half-brother to his new stallion, Marcel, and he too will be trained by Peter Chapple-Hyam.

Sensible terms for Marcel
The Racing Post Trophy winner’s addition to the stallion ranks may not be the headline retirement of the year but it should be greeted warmly for several reasons. Firstly, in the era of fierce competition from major stallion operations for the prize colts of each generation, it is always pleasing to see a new recruit for the National Stud, the profile of which has been dramatically improved under the guidance of Brian O’Rourke.

Furthermore, Makin’s terms for his stallion should be welcomed by the many people in the breeding industry who espouse the justifiable twin gripes of stallions being too expensive and covering too many mares. 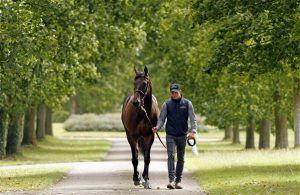 Marcel at home at the National Stud

Makin is not planning to send mares to Marcel himself but intends to buy some of his foals and yearlings when they reach the market. Despite selling almost all of his bloodstock at the Paulyn Dispersal at Goffs in 2013, the former owner of Group 1 winners Starcraft and Chicquita couldn’t resist retaining a scaled-down interest in racing and breeding.

“I love the mystery of it,” he confesses.

For a short time, he was the mystery buyer of Frankel’s most expensive offspring, when Finsceal Beo’s filly foal (now named La Figlia) went through the ring for €1,800,000. Her price tag has been bettered only by the recent in-training purchase of Frankel’s Group 3-winning daughter Toulifaut for €1,900,000 at the Arqana Arc Sale, and Makin was unveiled as La Figlia’s owner in the spring when she appeared in William Haggas’s string.

She has subsequently crossed Newmarket to join Jeremy Noseda and has an entry for the Irish 1,000 Guineas, one of two Classics won by her mother in 2007.

Makin, who turns 80 this year, is unlikely to repeat his short break from racing, preferring instead to keep the little grey cells turning over by pondering the great mysteries of the Turf. “I’m an old guy,” he says. “I tried to retire when I was 75 and now I’m five years older than that and I’m thinking to myself that I’m glad I didn’t retire as I nearly experienced depression. The legs might be weak but it’s important to work harder as you get older and to keep your brain active.”