Levy money must be used to support breeders

Following the Cheltenham Festival, where there was no British-bred winner in 28 races, and the Derby, in which only one horse with the GB suffix – third-placed Japan, who was bred and sold by Newsells Park Stud – finished in the first ten and the others filled two of the last three positions, it is hardly surprising that what appears to be a sorry situation is drawing comment from inside and outside the racing industry.

British racing relies to a significant extent on the goodwill of the government in supporting a levy on bookmakers’ gross profits. Presumably, in return it expects the money to be spent wisely across the board in support of the whole industry, a British industry that wherever possible should use a British-based product, rather than one that purchases the majority of its raw material, the horse, from foreign countries.

British breeders provide jobs and support many rural businesses in Britain. In addition, it goes without saying that every home-produced horse who races here provides work for trainers and jockeys and the teams behind them.

Horses bought abroad and raced in Britain contribute to the balance of payments deficit. It seems to make very little sense to have such an imbalance in trade when Britain has all the ingredients – ability, conditions, high health and welfare standards and a long tradition – to be able to produce good, even outstanding, racehorses.

However, there seems to be a noticeable element of hesitancy among British racing’s other individual constituents to support initiatives that use the betting levy to help those who support their own breeders. With this in mind, therefore, it is difficult to explain how only £150,000 out of an annual total levy income of around £80 million is directly spent on British breeders, through the Elite Mares’ Scheme for jumpers.

Even when the TBA has suggested that modest amounts of prize-money should be steered in the direction of supporting those who purchase racehorses bred in this country, support for the principle has not been unanimous.

Such a situation is unlikely to encourage breeders in Britain to believe the rest of the racing industry cares about breeding here. Furthermore, some stakeholders appear to take for granted the substantial sum of well over £2 million that those breeders and stallion owners contribute to the sport in prize-money through the European Breeders Fund and direct sponsorship.

As I have pointed out before in this column, the French have built their racing industry on prize-money premiums and breeder support. It is consequently no coincidence that they bred and exported half of the Cheltenham Festival winners.

Much of the French premiums go directly to breeders, and many TBA members would have liked the board to go all out for substantial breeders’ prizes in Britain. It was not an unreasonable request, however we felt it would be a difficult objective to achieve in an environment where prize-money was limited.

However, we have to ask why breeders, who are the base and bedrock of racing, should continue to accept the crumbs from the dining table when the independent Economic Impact Study commissioned by the TBA demonstrated the precarious nature of so many British breeding operations.

We have not asked for prize-money to be used to support only British-bred horses. None of the participants loses out in the scenario we have proposed, so it is hard to understand why there would not be widespread support for the schemes we suggest.

The British breeding industry is an essential component of our sport and we need assurances about proper and meaningful financial support in future. A stronger domestically produced supply will benefit British racing, and we have a compelling argument for government support.

A direct approach for intervention would argue that some of the current levy income should be used to support a global-leading product that is at risk, that attracts substantial inward investment and underpins the performance of a number of closely-related British-based businesses. We believe there is a strong case for substantial sums to be directed to support breeding, with the benefits filtering through to all those employed, directly and indirectly, the trade balance and the rural economy the industry is so vital in supporting. 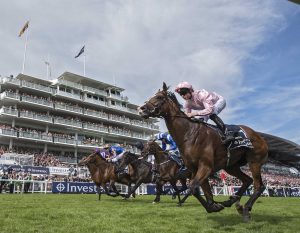