Rags to riches in a short time
Exclusive Columns

New to the Lower Sixth, at the age of 15, I was required to pen a paragraph on what I hoped to accomplish in my life. It was evidently routine at that stage of one’s Exeter School career; the headmaster wanted to know what those in my age group aspired to do.

I’ve often wondered what ambitions my classmates expressed, strongly suspecting that some of the creeps would have given answers that were sure to go down well with the beak. He would have been impressed by anyone who aimed to be a university professor, an archbishop or a field marshal. I didn’t care much what he thought about me when I submitted a single sentence: “I want to have my own regular column on a national newspaper.” 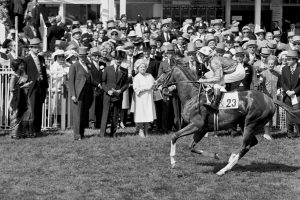 The Minstrel: dual Derby winner and one of the very best sons of Northern Dancer

As it turned out, that did me no harm, because three years later, when I was summoned for an interview at the Press Association and needed him to supply a reference, he obligingly included the note: “His interest in journalism is one of long-standing.” Cunningly, I had omitted to tell him that my interview was for a job in the PA’s racing department, which would not have impressed him.

Having been taken on, I soon realised that I was not going reach my goal as a tipster. While I could muster a passable appreciation of form at the top level – National Hunt as well as Flat in those days – I wasn’t sufficiently interested in run-of-the-mill racing to make sound judgements about low-grade handicaps and the like.

The obvious route to take, given that I was already keen on pedigree research, was via breeding, though I was conscious that few papers wanted or needed a specialist in that field.

But I persuaded myself that if I could remain patient, my time might come. The chaps active in that role who provided much of my education at that time – John Hislop and Bernard O’Sullivan in The Sporting Life, and Peter Willett in the Sporting Chronicle and Horse & Hound – were all a great deal older than me, and maybe I could step into the shoes of one of them one day.

There was also The British Racehorse, published five times a year, and a newcomer in the monthly Stud & Stable, each featuring writers from home and abroad from whom I could learn. There could be scope for me on either of those publications one day; I got my head down, studied the subject avidly, discovered the works of top American writers like Joe Estes and Charlie Hatton, and gradually acquired a fair amount of knowledge and a certain measure of sound judgement.

As it turned out, it was an annual, the Bloodstock Breeders’ Review, which first employed me to write on breeding matters. That was in 1967, and just four years later I found myself editing that prestige publication. It was not until 1976 that my ambition was realised, at The Sporting Life, some 13 years into my career.

One of the main reasons why a column on breeding had such appeal was that it seemed there would never be a problem over finding a subject. There was such a remarkable diversity in European pedigrees, with umpteen thriving male lines. It would always be possible to find a different angle. There would never be any danger of repeating oneself.

At least, that was how it had been for the likes of Hislop, O’Sullivan and Willett. I was barely into my innings before one little Canadian-bred horse began to dominate the world of thoroughbred breeding. As the sport and the industry were becoming progressively more international in character, one name kept cropping up as the chief instrument of change; I was going to spend the next 15 years – first with The Sporting Life, then with the Racing Post – writing about Northern Dancer regularly and extensively, struggling every time to find something different to say.

Life readers especially must have found it all so samey, as the paper seemed to have only one photo of the horse.

Already on the radar
It wasn’t that Northern Dancer was unknown as a successful sire before I began my stint. Nijinsky, who would remain the best of his runners, had won our Triple Crown, ensuring that his sire headed the Anglo-Irish list in 1970. And we had lauded other Group 1 celebrities in Europe like Lyphard, Northern Taste and Broadway Dancer while noticing their sire’s considerable accomplishments across the Atlantic, not least his 1971 championship season in North America.

But the catalyst that changed Northern Dancer’s image from a ‘mere’ highly successful sire on two continents to a global phenomenon was the Coolmore party’s decision in 1975 that in future it was his stock they should be concentrating on at Keeneland and Saratoga, where in the past they had been keen bidders for the progeny of such as Round Table, Forli and Damascus.

In that year they took a $200,000 punt on a three-parts brother to Nijinsky, who could hardly have resembled his close relation any less. The Triple Crown hero was a big imposing bay, whereas the younger horse, who acquired the name The Minstrel, was a small, flashy chesnut with four white socks.

While the pair were very different physical specimens, events were to show that they compared more closely in racing ability. The Minstrel won Derbys at Epsom and on the Curragh, and followed with a victory in the King George; one of his contemporaries at Ballydoyle was another Northern Dancer colt in Be My Guest, who had joined the stable after his (then) record-priced appearance as a yearling at Goffs.

The stars kept coming, and if we restrict the list to just Group 1 winners in Europe we identify Try My Best, Storm Bird, Woodstream, Lomond, Shareef Dancer, El Gran Senor, Northern Trick, Sadler’s Wells, Secreto, Antheus, Tate Gallery, Ajdal and Local Talent. Nureyev belonged in that group but was penalised for pilot error after a ‘victory’ on merit in the 2,000 Guineas.

Northern Dancer died in 1990, three years after his retirement from stud duties because of failing fertility, and just as we were beginning to realise that he had a special son at Coolmore in Sadler’s Wells, who would become a perennial champion sire – and the horse who was to dominate my columns for the next dozen years.

Thereafter, of course, I was to write exhaustively about Sadler’s Wells’s great successor, Galileo.

In fact, over the last 40 years I have been charting the development of a dynasty whose overwhelming dominance has cast so much else in thoroughbred breeding to the shadows. Northern Dancer’s most prominent son and most prominent grandson in this part of the world may have surpassed the dynasty’s founder by some statistical measures – Sadler’s Wells had winners of 327 European Pattern races and Galileo currently has 261 (39 this year!), compared with Northern Dancer’s 100, for instance – but for me it is the old man’s record in that respect which remains most striking.

Sadler’s Wells came along at the dawn of the era of three-figure books, and in Galileo’s time at stud the numbers have advanced again. Since Northern Dancer’s death the European Pattern has grown by nearly 100 races, having reached another peak of 413 in 2016.

By contrast, Northern Dancer never had a larger crop than the 36 born in 1974, which included The Minstrel and Be My Guest, conceived on a $25,000 fee. His crop of 1980 numbered only 31 foals, off a $100,000 fee, but among them were no fewer than ten who won European Pattern or North American Graded events, four of them successful at the highest level – Lomond and Shareef Dancer here, Hero’s Honor and Spit Curl in the States. He had 31 foals again in 1981, his European group, including El Gran Senor, Northern Trick, Sadler’s Wells and Secreto, notching nine Group 1 victories between them.

Such was Northern Dancer’s success as a sire of sires, in spite of his small crops, that it has now become almost impossible to breed a foal that does not trace to him at some point. Huge numbers have him twice, thrice or even more times in their background.

Sometimes I think it would have been good to write about a greater variety of subjects, but it has nevertheless been a privilege to chart the progress of the dynasty that changed thoroughbred breeding for all time.

Up Next
Rags to riches in a short time