Few European breeders had the foresight, or the necessary clout and resources, required to patronise the Japanese superstar Deep Impact after he retired to Shadai Stallion Station at the end of 2006. Among those that did were the Niarchos and Wildenstein families, with the Wildensteins making the most of the experiment. They sent a pair of mares to visit the son of Sunday Silence in 2007 and 2008 before the mares were returned to Europe to visit Zamindar. 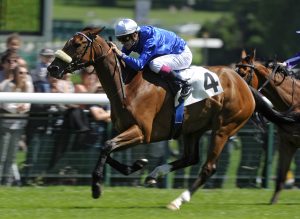 The Wildensteins’ boldness in sending these very well-related mares all the way to Japan could hardly have worked out better. The first foal out of Angelita, an unraced sister to the dual American Grade 1 winner Angara, is Aquamarine, a surprise winner of the Group 3 Prix Allez France on the last day of April.

The Wildensteins have never been afraid of close inbreeding when selecting mates for their mares. Aquamarine is inbred 3×2 to Alzao, as Deep Impact is out of one of Alzao’s best daughters, the Oaks second Wind In Her Hair.

The Wildensteins’ other mare, Giant’s Causeway’s very useful daughter Bastet, has done even better than Angelita. A half-sister to the outstanding Australasian gelding Might And Power and from the family of four-time Group 1 winner Mosheen, Bastet has a perfect record with her Deep Impact foals. The first, Barocci, earned a Timeform rating of 111 in 2011, when he won the Prix Omnium II and was runner-up to Casamento in the Prix du Prince d’Orange. Bastet’s second Deep Impact foal, Beauty Parlour, has the potential to totally overshadow Barocci.

Now unbeaten in four starts, she won the Group 3 Prix de la Grotte with plenty in hand before going on to Classic success in the Poule d’Essai des Pouliches. She is not Deep Impact’s first winner of a 1,000 Guineas equivalent, however, as his first crop contained Marcellina, winner of the Japanese version, the Oka Sho, in 2011 and his second produced the 2012 winner Gentildonna (a daughter of the Cheveley Park Stakes winner Donna Blini).

You can gauge how well Deep Impact is doing in his home country from the fact that his three-year-old sons filled first, second and third places in the Grade 3 Kisaragi Sho in February. His five runners in the Japanese 2,000 Guineas included the second, World Ace, and third, Deep Brillante, while his four fillies in the Oka Sho included not only the winner Gentildonna but also the runner-up Verxina. He also sired the first four home in the Grade 2 Kyoto Shimbun Hai on May 5.

Of course Deep Impact’s desirability as a stallion has conferred the advantage of having plenty of representatives. Following a first crop numbering 147 named foals, he has 159 three-year-olds in 2012, 117 two-year-olds and 137 yearlings. By the end of April he held top place on Japan’s list of leading sires, ahead of King Kamehameha, whose talents were advertised by the impressive victory of his son Rulership in the Group 1 QEII Cup at Sha Tin.

In much the same way that the Chinese emperors tried to stop the secrets of silk production from falling into the hands of foreigners, the Japanese have tended to keep a close hold of Sunday Silence’s best sons, such as Deep Impact, Zenno Rob Roy, Stay Gold, Special Week, Neo Universe, Manhattan Cafe and Agnes Tachyon.

Sunday’s southern experiment a notable success
Of course there have been some notable successes for some of the Sunday Silence sons which slipped through the net. Natagora did extremely well for Divine Light and Hat Trick earned a transfer to Gainesway Farm on the back of the unbeaten run by his French champion Dabirsim. Hat Trick now has a second Graded winner to his credit in talented American turf colt Howe Great.

Breeders in Australasia negotiated for some of Sunday Silence’s sons to shuttle to the southern hemisphere, with Fuji Kiseki, Tayasu Tsuyoshi, Genuine and Bubble Gum Fellow among those who sired Group winners. They also tried a different ploy, with some success. Thanks to the initiative of Arrowfield’s John Messara, arrangements were made for Sunday Silence to cover a limited number of mares to southern hemisphere time between 1998 and 2001.

One of them is Silent Heir, a mare who was foaled on September 23, 1999. Her owners decided to send her to England. She had to be given time to make up for her late birth date but she made a winning debut over a mile and a quarter at Redcar. A grand-daughter of the champion middle-distance mare Park Express, now best known as dam of New Approach, Silent Heir has superlative bloodlines.

Two of her first four foals are by Oasis Dream, the first being Young Pretender, winner of the Group 3 Prix La Rochette, and the second is Quiet Oasis, who won the Grade 3 Wilshire Handicap at Hollywood Park at the end of April. Silent Heir was sold for 320,000gns in 2010, while carrying a colt by Sea The Stars, and has been returned to Australia following a cover by Galileo on September 12, 2011.

The other Australian-foaled Sunday Silence mare which has excelled is Sunday Joy. Her dam, the Danehill mare Joie Denise, had won the Queensland Oaks and Sunday Joy did even better, winning the AJC Australian Oaks over a mile and a half. Irish racegoers certainly didn’t see the best of her when she was transferred to Dermot Weld, as she trailed the field throughout when last in a mile and three-quarters Listed race. She was successfully covered by Sadler’s Wells soon afterwards and returned to Australia.

Her first mate back in her native land was the American shuttle stallion More Than Ready. The resultant filly, More Joyous, was foaled in New Zealand, as Sunday Joy was visiting Zabeel. Although it has been another Australian-trained mare, Black Caviar, who has been dominating the headlines, More Joyous has also turned in some heroic performances.

Rated 117 on the 2010 World Thoroughbred Rankings and 120 in 2011, More Joyous seems better than ever this year, reeling off three Group 1 victories during April. When she won the BMW Doncaster Mile, she was giving 2lb to the former Australian Derby winner Shoot Out and 12lb to the triple Group 1 winner Yosei. Then she won the Queen Elizabeth Stakes over a mile and a quarter when in receipt of only 4lb from the bang in-form Manighar.

The notable aspect of More Joyous’s pedigree is that she is inbred 3×3 to Halo, as More Than Ready is a son of Southern Halo. The Japanese 2,000 Guineas winner Victoire Pisa, a grandson of Sunday Silence, is inbred 3×4 to Halo and other examples include the smart Japanese horses Danon Chantilly (3×3) and Asakusa Den’en (3×4), Queensland Oaks winner Allow (3×4) and US sprinter Here Comes Ben (4×4).

Part of More Than Ready’s appeal as a mate for Sunday Joy is that he produced five lines to Almahmoud: two via Southern Halo, who was inbred 3×4 to Almahmoud via Cosmah and Natalma, a third via Sunday Silence, whose sire Halo was a grandson of Almahmoud, and the other two via Danehill, sire of More Joyous’s second dam, as he was inbred 3×3 to Natalma.

Ready for more Halo line stallions in Europe
I mention in the notes on More Joyous that her pedigree contains five lines to Almahmoud – three via Natalma and two via Cosmah. Interestingly, her sire More Than Ready has enjoyed greater success in Australia, where he has sired nine Group 1 winners, than in his native North America, where he has two Grade 1 winners (one in Canada).

One possible contributing factor to More Than Ready’s greater success in Australia is the prevalence of mares descending from Danehill. From his substantial number of foals out of Danehill mares, More Than Ready has enjoyed top-level success with Dreamaway (WATC Derby), Perfectly Ready and Benicio (Victoria Derby).

The next most popular option after Danehill mares has been mares by Flying Spur, one of Danehill’s champion stallion sons. The standard-bearer for this cross was the Golden Slipper Stakes winner Sebring and this year has seen the cross represented by the Group 3-winning juvenile Ashokan, the very useful juvenile Raceway and the unbeaten gelding Landing, winner of the Group 3 South Pacific Classic. More Than Ready now has seven stakes winners out of Flying Spur mares.

All of which makes me wish we had some top-class Halo line stallions in Europe, where they could prove a considerable asset to the proliferating number of Danehill line mares.
A leading son of Sunday Silence would do very nicely!

Up Next
Mickley Stud’s multiple reasons to celebrate