Sunday’s shock 1,000 Guineas Trial Stakes heroine also owes much of her success to her family that was cultivated by the late Sheikh Hamdan

One of the most heart-warming stories from the weekend was the brave success of Keeper Of Time in Sunday’s Group 3 Ballylinch Stud ‘Priory Belle’ 1,000 Guineas Trial at Leopardstown.

A mere €3,000 short yearling purchase, the 80-1 shot answered every call of jockey Ronan Whelan to hold off the fast-finishing Mehnah and win by a head. Perhaps the outcome would have been different had the line arrived a few strides later for Mehnah, who remains an immensely exciting prospect going forward for Kevin Prendergast. But on the day, the plaudits belonged to Keeper Of Time, her trainer Johnny Feane and owner John Nolan, thereby proving that fortune still smiles kindly upon the smaller operations in this sport from time to time.

“It’s fantastic,” Feane told Racing TV. “John owns her and he led her up. I was talking to Seamie Heffernan just there and he said the look on John’s face coming in was a sight to behold. It’s fantastic for him.

“John wasn’t afraid to come here, seven furlongs round a bend. And Ronan gave her a beautiful ride down the inside – the gaps came and she was brave and good enough to run through them and to the line.”

Another angle to the story is the relentless rise of Keeper Of Time’s sire, Tally-Ho Stud’s Mehmas.

His first crop won many fans last year through their hardiness and willing attitudes, and plenty showed above average talent to go with it. When all was done and dusted, he ended the year with a record-breaking 56 juvenile first-crop winners, among them six stakes winners led by the Middle Park Stakes hero Supremacy and Gimcrack Stakes scorer Minzaal.

⌛ Keeper Of Time knew where she had to be and springs a surprise to win the Group Three @BallylinchStud “Priory Belle” 1000 Guineas Trial Stakes for @WhelanRonan and John James Feane ✨#BallylinchStudClassicTrialsDay pic.twitter.com/2gJfMSl4Ul

It was an exceptional start and one that propelled his yearling average by 45% from 2019 to 47,153gns. His fee also received a hefty increase, rising from €7,500 to €25,000 – although by all accounts, that has failed to dampen any enthusiasm, with Mehmas on course to be one of Europe’s busiest sires of 2021.

Chances are, however, that those using him this year are catching him on the rise. The sceptics were unconvinced that his stock would train on effectively; after all, Mehmas had been retired straight to stud at the end of a busy eight-race juvenile campaign for Richard Hannon that had been highlighted by wins in the July and Richmond Stakes.

Yet from what we’ve seen so far this year, the sceptics will be slinking back into the shadows.

For starters, the son of Acclamation is responsible for two of the better Californian three-year-old fillies in the Irish-bred pair Going Global and Quattroelle, who ran first and third in the China Doll Stakes at Santa Anita Park. In fact, Going Global is unbeaten in three starts for Philip d’Amato in California, having recently also added the Grade 3 Providencia Stakes to her record.

Listed winner Acklam Express has also acquitted himself well in Dubai, notably by running a recent third against older horses in the Group 1 Al Quoz Sprint.

Closer to home, Mehmas also boasts four early entries in the 2,000 Guineas while there are positive early season vibes for the prospects of Supremacy. As for Keeper Of Time, she is his seventh stakes winner overall.

Keeper Of Time wins the G3 1,000 Guineas Trial Stakes @LeopardstownRC! Congrats to all at Tullogher House Stud, who bred her out of Motheeba pic.twitter.com/rav6NJcoc1

Another likeable aspect to Mehmas is how his success is assisting an array of smaller outfits, like fellow Tally-Ho stalwart Kodiac before him. As far as the auction ring is concerned, Cregg Stud springs to mind; in a year where the Noonan family’s operation sold a select group of seven yearlings, it was a pair of Mehmas colts who set the seal on their sales season by turning over 620,000gns at Book 2 of the Tattersalls October Sale.

By contrast, Keeper Of Time cost John Nolan just €3,000 at the 2019 Goffs February Sale having been led out unsold at the previous year’s Goffs November Sale. That is not to say that she is poorly connected. Bred by the Phelan family’s Tullogher House Stud, she is out of a Listed-placed dam, Motheeba, who represents one of Sheikh Hamdan’s most successful families.

Similarly, runner-up Mehnah also hails from a long-serving Shadwell family as a half-sister to Awtaad and descendant of Ghashtah, a $2.3 million yearling purchase by the Sheikh in 1987. Where the difference lies, of course, is in the fact that Motheeba was culled by her breeder for just 2,000gns as a two-year-old in 2011.

This family joined the Shadwell fold with the purchase of Motheeba’s fourth dam Manal for $525,000 through Tom Jones at the 1980 Keeneland July Sale. Bred by William Farish, Manal was a Luthier sister to the 1976 Prix Noailles winner Twig Moss and Group 1-placed Tip Moss. Another half-brother, Brush Aside, would later carry Sheikh Mohammed’s colours to victory in the 1990 John Porter Stakes.

Manal, on the other hand, showed little in three starts. However, she came to exert a major influence upon Shadwell, primarily as the dam of Muhbubh, a daughter of Blushing Groom who was saddled by Jones to win the 1988 Princess Margaret Stakes.

In time, other daughters of Manal would come to provide Shadwell with top-class performers such as Mustashry, Maraahel and Asfurah. However, throughout it was Muhbubh who remained one of its most important conduits as the dam of successful producers Sayedat Alhadh (dam of Diadem Stakes winner and Shadwell sire Haatef, Group 3 winner Walayef and Listed winners Shimah and Ulfah) and Balaabel (dam of Rockfel Stakes heroine Sayedah) in addition to American Grade 2 winner Kayrawan, subsequently a Shadwell stallion in Kentucky.

“Keeper Of Time is out the Listed-placed Motheeba, who represents one of Sheikh Hamdan’s most successful families”

At one point, Kayrawan stood at Shadwell’s Kentucky division alongside both Sahm and Mustanfar, two regally-bred horses who would later combine in the background of Keeper Of Time.

In 2004, 18-year-old Muhbubh was sent to Sahm, a Grade 2-winning son of Mr Prospector and Salsabil. Despite standing for small fees, Sahm did actually become a useful sire for Shadwell prior to his early death. But Muhbubh’s filly, Ishraak, did little for his reputation, failing to reach the track before a low-key career at stud – although a black-type producer at a minor level, her sale for $8,000 at Keeneland in November 2018 sums up her profile.

Now thanks to her granddaughter Keeper Of Time, the tide is turning.

Keeper Of Time is the third foal and only winner out of Ishraak’s daughter, Motheeba. Shadwell shifted out of this branch of the family when selling Motheeba at the 2011 Tattersalls Autumn Horses in Training Sale for 2,000gns to Scuderia Bosco. In fairness, Motheeba was a likely candidate for culling.

Firstly, she had shown very little in two starts for Ed Dunlop. In addition, she was a daughter of the little known Grade 3 winner Mustanfar, an Unbridled horse who likely owed his addition to the Shadwell’s Kentucky roster as a grandson of Height Of Fashion. Mustanfar stood for just $3,000 and was sparsely used before winding up in Indiana. Indeed, when Motheeba went on to win five races and run Listed-placed under the care of Sebastiano Cannavo in Italy, she became her sire’s highest-earning runner.

There are also only four daughters of Mustanfar in production at stud worldwide; between them, they have six foals of racing age and unsurprisingly, Motheeba is the sole stakes producer.

Much of the credit in the case of Keeper Of Time is naturally due to Mehmas. Yet having said that, in a month where the industry has been shaken by the passing of Sheikh Hamdan, there is something quite appropriate about a Group 3-winning filly whose female family represents a blend of Height Of Fashion, Salsabil and Manal, three of his most important mares. 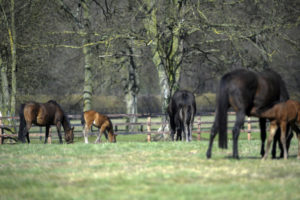 Up Next
Invest today to safeguard our sport in future years