Princess Grace became the first such inbred stakes winner outside of Japan when taking the Grade 3 Mrs. Revere Stakes at Churchill Downs

The rise of Sunday Silence into a global force was one of the key elements behind Japan’s development as a major racing nation. As the near black son of Halo entered his twilight years at the Shadai Stallion Station, he attracted the attention of various leading international breeders willing to ship their mares to Japan for an opportunity to secure a foal by the stallion. That momentum has since carried over to his best son Deep Impact, meaning that the Sunday Silence influence can today be easily tapped into all over the world.

To recap, Sunday Silence’s dominance in Japan was such that he reigned as the country’s champion sire on no fewer than 13 occasions. He left behind 171 stakes winners and came to be represented by a host of successful sire sons, among them Deep Impact, Heart’s Cry, Daiwa Major, Agnes Tachyon, Special Week and Stay Gold.

Such domination, however, comes at a price. His towering influence as a sire of sires and broodmare sire means that Sunday Silence is now everywhere within Japanese bloodstock, making the need for an outcross suddenly all the more important.

For a stallion to succeed today in Japan, he invariably needs to possess the ability to click with Sunday Silence line mares. One answer is certainly Lord Kanaloa, the current heavyweight of the Shadai roster, whose stud record consists of 15 stakes winners out of Sunday Silence line mares (65% of his total) led by champion Almond Eye. Another is Harbinger, whose popular daughter Deirdre is the product of a Special Week mare.

Another side effect of Sunday Silence saturation is that some breeders will have little option but to inbreed back to the stallion. Therefore, it is a pattern which is becoming rapidly more prevalent; look no further than the JRHA Select Sale, at which 55 of the lots catalogued possessed such inbreeding.

For all his success, there are risky factors to take into account on doubling up on a stallion who was renowned for his fiery temperament and propensity to throw questionable hocks. Regardless, it remains that for whatever reason, the idea of inbreeding to Sunday Silence has yet to return the level of results to be expected against opportunity.

There are over 2,700 named foals inbred to the stallion, of whom close to 2,200 have run. Of those, 1,057 have won but only 13 at stakes level. The group does at least include the outstanding three-year-old filly Daring Tact, this year’s Japanese Fillies Triple Crown winner. From the first crop of Epiphaneia, whose dam Cesario is a daughter of Special Week, she is a granddaughter of the Sunday Silence mare Daring Heart.

While Daring Tact remains the only Group 1 winner to boast the pattern, events from the past few days suggest that she might not be alone for long.
Three Group/Graded stakes winners contributed to the haul within the space of nine days. Unsurprisingly, two came in Japan in the form of Authority, a third-crop son of Orfevre (by Stay Gold) who landed his second Group 2 of the year, the Copa Republica Argentina at Tokyo, on November 8, and two-year-old Meikei Yell, a valuable flag-bearer from the first crop of Shadai’s Mikki Isle (by Deep Impact) who captured the Group 3 KBS Kyoto Sho Fantasy Stakes at Hanshin on November 7.

Then on Saturday, new ground was broken by Princess Grace, who became the first such inbred stakes winner outside of Japan when taking the Grade 3 Mrs. Revere Stakes at Churchill Downs for trainer Michael Stidham. Originally scheduled to be run as a Grade 2 on the turf, the race was switched to Churchill’s dirt surface after its grass track was deemed unsafe and therefore downgraded to Grade 3 level.

Not that the switch made any difference to Princess Grace. Previously campaigned exclusively on turf, John and Susan Moore’s homebred made light of the surface transfer to power away for a near three-length victory over Pass The Plate.

PRINCESS GRACE is the winner of the Mrs. Revere Stakes 🏆🐴👏 pic.twitter.com/MpLdNsGtbX

Princess Grace becomes the sixth stakes winner by Gainesway Farm’s young stallion Karakontie, and the fifth to emerge out of his 90-strong first crop.

Bred by the Niarchos family, Karakontie was produced by the Sunday Silence mare Sun Is Up, whose dam Moon Is Up was one of those aforementioned mares to head to Japan as Sunday Silence began to gain international appeal. Although a son of the former Kentucky stallion Bernstein, Karakontie himself also owns a Japanese suffix having been foaled in Hokkaido in the year Sun Is Up travelled to Japan to visit the Niarchos’ Arc winner Bago.

The well-travelled Karakontie went on to be trained in France by Jonathan Pease, for whom he won the Prix Jean-Luc Lagardere at two and the Poule d’Essai des Poulains and Breeders’ Cup Mile at three. His win in the Breeders’ Cup Mile in particular underlined his place as one of his generation’s top milers.

Karakontie retired to stud in Kentucky, where his close relation Kingmambo had thrived before him at stud. Although he has never stood for more than $15,000, he does benefit from the assistance of some powerful connections, notably the Niarchos family, Gainesway Farm and Merriebelle Stable.

In return, Karakontie’s first crop has made its presence felt on both sides of the Atlantic; Horris Hill Stakes winner Kenzai Warrior and Group 2-placed Ketil are among his European highlights while Grade 3 winners Princess Grace and Sole Volante, a one-time Classic candidate, have showcased his ability to throw high-class dirt runners in the US. Interestingly, both Kenzai Warrior and Sole Volante are inbred to the Niarchos’ mighty mare Miesque.

Princess Grace’s second dose of Sunday Silence comes via her damsire Silent Name. Similarly to Sun Is Up, Silent Name was bred by an European-based outfit, in his case the Wertheimer brothers, during a time of heightened European interest in Sunday Silence.

Silent Name went on to reward that endeavour by winning a pair of Listed races in France and the Grade 2 Santa Anita Arcadia Handicap and Commonwealth Stakes in the US. He has spent the entirety of his stud career in North America under the Adena Springs banner, latterly at its base in Canada, during which time he has become a useful sire with 26 stakes winners to his credit.

Princess Grace was bred by John and Susan Moore in Kentucky out of Masquerade, a six-time winner who was also stakes-placed at a minor level on the turf. She is the sole runner to date out of the mare, who is a half-sister to Grade 3 winner Svea Dahl and descends directly from Claiborne Farm’s champion two-year-old Regal Gleam.

Princess Grace didn’t make the track until August of this year when successful on debut at Colonial Downs. As such, the Mrs. Revere Stakes was only her fourth start and second in stakes company after her runner-up effort in last month’s Grade 3 Pin Oak Valley View Stakes at Keeneland. It’s very likely that we haven’t heard the last of her. 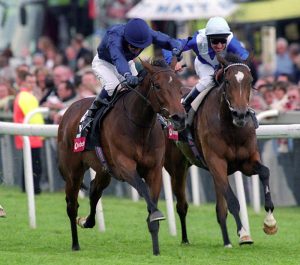