The 2020 edition of the Tattersalls February Sale in Newmarket won’t be remembered as a vintage renewal but those in participation could take encouragement from the solid demand in evidence within differing levels of the market.

The defection of Listed winner Sivoliere, a well-related Sea The Stars mare in foal to Kingman, among a raft of withdrawals left a rather depleted catalogue, one that for vendors was based upon the theme of moving horses on rather than gaining profit.

In turn, the clearance rate wound up at a very healthy 87% per cent for 264 horses sold. And as ever, matters were enhanced by a deep international buying base that consisted of buyers from approximately 30 different countries.

So, while an average of 12,350gns paints the picture of a low-key market, the end-of-sale statistics posted significant improvements from 2019. For instance, the average itself represented a rise of 16% while the aggregate increased four per cent to 3,260,300gns. The median leapt 30% to 6,500gns.

Tattersalls Chairman Edmond Mahony drew attention to the importance of international participation. He said: “The February Sale’s ability to draw buyers from all corners of the world has been particularly evident over the past two days with buyers from around 30 different countries all contributing to robust trade from start to finish and a set of figures which compare favourably with last year’s February Sale.

“The average and median have both risen appreciably and the top price of 200,000gns for the stakes-winning filly I’ll Have Another comfortably surpassed last year’s top price at this fixture.

“The turnover has also risen despite a significantly smaller catalogue, and a clearance rate nudging 90% is another clear indication of the enduring appeal of sales of this nature at Tattersalls.

“As ever, the quality consignments from Godolphin, Juddmonte and Shadwell have been well received and in addition to widespread participation from throughout Europe including Belgium, Cyprus, Denmark, Greece, Hungary, Spain, Sweden and Turkey, buyers from the Gulf region as well as Australia, Kazakhstan, Israel, Libya, South Africa and the USA have all made a significant contribution to a Tattersalls February Sale, which has provided a positive start to the year.”

Listed winner I’ll Have Another led the way among a pair of six-figure lots, selling for 200,000gns to agent Cormac McCormack on behalf of an undisclosed client looking to breed to Ten Sovereigns.

Sold by The National Stud on behalf of Paul and Clare Rooney, the tough daughter of Dragon Pulse boasts a lengthy resume for Mark Johnston as the winner of four races including the Listed Preis des Medienhauses Rheinland Junioren-Preis at Cologne. She was also stakes-placed on another five occasions.

“She has a pedigree, she is a lovely, scopey mare – a queen,” said McCormack after outbidding Eamonn Reilly of the BBA Ireland and the filly’s breeder, Luke Barry of Manister House Stud. “She is hopefully going to go to Ten Sovereigns.”

I’ll Have Another is the best of three winners out of Jessie Jane, a winning Dylan Thomas relation to Phoenix Stakes winner La Collina.

The second and final horse to hit six figures over the two-day sale was the four-year-old gelding Power Link, a progressive sprinter on the all-weather for James Tate who was sold through Paul Murphy to Paul Harley and Emblem Stables for 100,000gns to continue his career in Saudi Arabia.

Already a four-time winner, Power Link came into the sale with a revised rating of 98 following a trio of recent placed efforts.

“Paul is in Saudi at the moment,” said Murphy. “This horse has a good rating and looks as though he will be a great fit for racing in Saudi.”

A wide and varied international buying base also consisted of investment from Australia via agent Matt Houldsworth, who went to 62,000gns for the well-related Dubawi filly Memphis.

The highlight of the draft offered by her breeder Godolphin, the unraced three-year-old is a half-sister to Group 1 Fillies’ Mile heroine Lyric Of Light and out of the Group 1-placed Suez, a granddaughter of Meon Valley Stud’s remarkable producer Reprocolor.

“She is going to a good farm in Australia, a new client, and will not race on,” said Houldsworth. “She is by Dubawi and a half-sister to a Group 1 winner who is breeding now – there is a lot to like. There can’t be many mares by Dubawi in Australia.”

The short yearling section provided a stark illustration of the challenges faced by those at the lower end of the market, as an average of 8,926gns for 23 sold attests. Only one youngster surpassed the 25,000gns mark but the filly in question, a first-crop daughter of Churchill, wound up as one of the most popular lots of the opening day thanks to a 56,000gns valuation from Tally-Ho Stud.

Bred in Ireland by Azienda Agricola Gennaro Stimola and sold through The Castlebridge Consignment, the filly boasts a fine pedigree as a half-sister to seven winners including the Group 2 Premio Ribot winner Porsenna and Listed scorer Basileus. 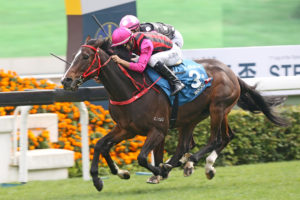 Up Next
Family affair as Waikuku hits the heights