‘If you have dreams, you have to commit and go for it’

Dulcie West has overcome notable adversity to land the Stud Staff category at the Godolphin Stud and Stable Staff Awards this year.

If ever any inspiration was needed of the satisfaction that young people can gain by working in this industry, then look no further than Dulcie West.

West was crowned this year’s winner of the Stud Staff category at the Godolphin Stud and Stable Staff Awards las month in recognition of her role as pupil assistant at North Farm Stud. The Wantage-based operation is home to well over 100 horses during a busy season, ranging from stud stock to ex- racehorses passing through its HEROS retraining and rehoming programme. Under the stewardship of the stud’s director Grace Muir, West is a key player within the retraining and riding arm, having worked her way through the ranks from her original part-time role.

Yet along the way, she has had to overcome great adversity, notably a stroke that weakened her left hand.

“I met Grace in 2009 and used to come to the stud during weekends and school holidays,” says West. “I’d never been around horses before so in the first year I got to grips with the health and safety and started riding in 2010.

“I started working at the stud in 2018 and that’s when I really got into the retraining and the breeding side.”

Muir belongs to a family steeped in racing as the daughter of Ian Muir, who bred the 1969 Cheltenham Gold Cup winner What A Myth and stood top stayer Buckskin and Lockinge Stakes winner Supreme Sovereign at his nearby Fawley Stud. Thoroughbred breeding remains part of North Farm Stud today but through HEROS, established in as a charity in 2006, it is also a long- established leader when it comes to the rehoming of ex-racehorses. It has also won many fans for its range of educational programmes, all of which involve interaction with the stud’s equine residents. Indeed, the BHA recognises HEROS as a bespoke ‘Route to Racing’.

“In 2015 with help from The Racing Foundation, we were able to set up our education arm,” says Muir. “We have special educational needs children coming through and we’ll start them off with cobs. But we try to get them on to Thoroughbreds as soon as we can because they are amazing with children – they are far more intuitive and will interact with them in the most amazing way. We’ve had a lot of success and our students are now going out into the industry and doing really well.”

It was in this environment back in 2018 that West was able to embark on a Level 3 apprenticeship in Horse Care at Senior Groom level. Several months ago, she passed with distinction – achieved despite the adversity that at times has been thrown in her way.

“School wasn’t easy as I was bullied – I’d do everything I could not to go,” says West. “And then in 2015, I had a stroke, potentially from a fall. I was sent to Great Ormond Street Hospital but even after a lot of tests, they couldn’t give me an answer as to why it happened. It has affected my left hand and I now use it differently to other people. But I can still use it – I think if you have dreams that you want to achieve, then you have to commit and go for it, get over the fact that something might have happened.

“I really enjoy the retraining. You never get a Thoroughbred that isn’t willing to learn. They’re kind, versatile and always try their best.”

Muir adds: “Dulcie has worked really hard on her riding and she rides now to a really high level. And we’ve done a lot of work to get her hand stronger. She’s an integral game player, all my owners like her and she has an important role as my assistant. I wouldn’t want to run the stud now without her.”

Muir is also quick to pay tribute to the support of Godolphin.

“How lucky are we to have Godolphin supporting this?” she says. “Godolphin are also partners with the HEROS Enrichment Programme [designed for 11–16yo students who are not coping in mainstream school and need to learn in a different environment]. They are amazing. An award like this is a massive thing for staff.

“The racing industry is very much a family and we as an organisation try to instil that into people, to help them understand what a brilliant network racing has. There are so many jobs and so many different things people can do.”

For West, her role at North Farm Stud is one where she continues thrive. She has forged a good relationship with ex-racer Shipping Forecast, with the pair having recently qualified for the Retraining Of Racehorse Regionals. Then there is Dave’ll Do, a two-year-old Adaay filly she helped foal and is now bringing on ahead of her entry into training.

“I think it takes a lot for people to come into our industry because you’re dealing with big animals, which can be daunting,” says West. “But if they’re brave, confident and committed, then they’ll be fine. You have to enjoy it and be loving to the animals. It’s a job I love and I look forward to doing it every day.” 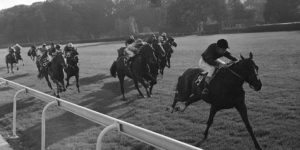 Up Next
Landmark anniversaries celebrate two greats of the turf