Hurdles to overcome off the track

Funding and welfare among the important issues the sport must address

As the Gambling Act Review still rumbles on and, whilst we have seen the sport’s green shoots of recovery, racing has some much longer-term, gnarly issues to deal with, threatening both the recovery and our sport’s future.

The recent developments in the US around doping highlight one area of concern that cannot be ignored just because of the jurisdiction. This is an incredibly problematic and saddening issue. The sorry tales of Jorge Navarro and Seth Fishman and the ongoing attempts by the New York Racing Association to suspend Bob Baffert put racing and its reputation at risk. The NYRA argued in its case against Baffert that doping is an existential threat to the sport of racing. A news article following the case noted it could condemn the sport “to the graveyard of passe pastimes alongside… circus animal acts”.

Whatever you think, the impact of doping is widespread and extends beyond our sport. It is both a credibility and a welfare issue. Racing is competition at its purest, underpinned by a sense of fairness and honour. When credibility of competition is eroded it undermines the whole sport and attacks the funding model upon which the industry is based. Removing credibility and a level playing field has the potential to destroy the sport. It makes it less attractive to new owners and less trusted by those that take part.

The inability to maintain high welfare standards also undermines our sport. Doping, in most of the recent cases, appears to have a negative impact on a horse’s welfare. At a time when welfare is a priority for our sport, these episodes only set us back in the perceptions of the public and, most concerningly, those who would see our sport banned. Add the recent abhorrent cases of apparent abuse of horses themselves and we are all on shaky ground.

Issues like doping negatively impact the external perception of racing as a sport. To run races in this country we rely on the buy-in of those who do not go racing. Racing requires the tacit consent of the society within which it operates. I am confident that in the UK we have a strong anti-doping stance, for the good of the sport and the horse if nothing else. We must remain on high alert that advances made by the dopers is matched and bettered by our own integrity and policing departments.

Racing’s finances and funding are another of those gnarly, long-term issues. Last month I wrote about the need to ensure that our government and political representatives fully understood the impact of potential changes to legislation as a result of the Gambling Act review.

I am chiefly concerned that there is not a full and proper understanding of the close relationship between the gambling industry and the horseracing industry. A hit to one is a hit to the other. Racing, given its current financial state, could not sustain a significant loss of revenue.

Encouragingly, a recent exchange in the House of Commons between the Minister responsible for the review, Chris Philp MP, and long-term supporter of the industry Andrew Bridgen MP delivered a ray of sunshine: when asked whether there will be an impact assessment of the draft proposals regarding gambling regulation on horseracing, the Minister replied that “horseracing is a vital sport… and is a significant source of national pride and prestige. Nothing in the Gambling Act review, I hope, will… undermine the financial condition of that great sport”. I too hope that is the case.

The ever-present issues of last year, like funding, distribution and the welfare of horses and participants, will remain on the agenda in 2022. Even with so much excitement on track, it is vital the sport’s leadership continues to focus on these and many other thorny problems to protect racing’s future. 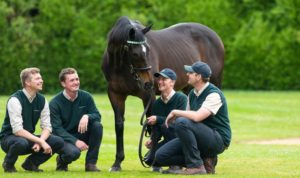 Up Next
Dansili leaves a mighty legacy