You have to take your hat off to John Gosden. The Newmarket handler carried all before him this autumn, mopping up big races on both sides of the Channel, confirming his position as Britain’s leading trainer. Yet the results don’t tell the full stories.

Much of the post-race conversation after the Prix de l’Arc de Triomphe concerned runner-up Sea Of Class and the ride she was given by James Doyle. From a nightmare draw, Doyle decided to drop back and settle his filly at the rear of the field, in the hope of conserving energy for a late challenge.

The plan almost worked to perfection, as they weaved their way through the traffic and surged home at the newly-styled ParisLongchamp, yet in Enable, they found an opponent that refused to yield, failing by the narrowest of margins to catch Khalid Abdullah’s daughter of Nathaniel.

In taking Enable to the Arc with only one run under her belt – an easy victory on the all-weather at Kempton in September – after a difficult preparation, Gosden knew his filly was vulnerable in her bid for a repeat victory in the Paris showpiece.

Yet, while perhaps some way short of her best, she was still good enough to take the spoils after a perfectly-executed ride from a good draw. A re-match with Sea Of Class cannot come soon enough.

Roaring Lion has been one of the stars of the Flat season, his partnership with Oisin Murphy yielding victories in the Coral-Eclipse, Irish Champion Stakes and Juddmonte International, all over ten furlongs on quick ground.

Not wanting to take on stablemate Cracksman on a testing surface in the Champion Stakes, Gosden switched Roaring Lion to the straight mile of the Queen Elizabeth II Stakes, an all together different challenge.

Many observers – this one included – thought such a plan would fail against specialist milers. However, Gosden knew better and despite not enjoying the conditions, Roaring Lion proved how tough he is with a hard-fought neck victory, a superb result for the trainer and jockey, owner Qatar Racing and also his sire, Kitten’s Joy, who stands at Ramsey Farm in Kentucky.

Not to mention his breeder, Jan Vandebos, who was at Ascot to watch the foal she reared race for the first time.

Moving on to Cracksman, Anthony Oppenheimer’s colt had looked out of sorts this season, but sporting blinkers for the first time back on soft going, the son of Frankel emulated his victory of the previous year in the Champion Stakes, galloping to a six-length triumph.

Top horses produced in top condition for the top races; that’s Godsen’s job, in a nutshell, and he does it brilliantly.

If Cracksman and Roaring Lion are the past – stud duties now beckon for both in 2019 – then Too Darn Hot is the future.

Classics will be on the agenda for this exciting son of Dubawi next year, though perhaps it’s wise to heed the words of Tony Morris, who recalls the list of brilliant juveniles that failed to progress in their three-year-old seasons.

Too Darn Hot was born and raised at the Lloyd-Webbers’ Watership Down Stud, under the eye of Stud Manager Terry Doherty.

Terry received the Stud Staff Award and was named Employee of the Year at the Godolphin Stud & Stable Staff Awards in 2017.

He explains what that recognition meant to him and his colleagues, who carry out their work away from the public gaze, but which ultimately produces horses like the aforementioned Too Darn Hot for us all to enjoy.

Owners and breeders have the opportunity to nominate someone for this year’s awards and can do so at studandstablestaffawards.co.uk. The nominations period closes on November 20. 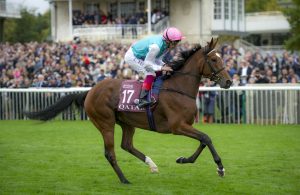 Up Next
EIS points to Britain's big reach from small crops