French 2,000 Guineas winner is one of 24 runners inbred to the mare

Inbreeding to influential mares, otherwise known as the Rasmussen Factor, has long been a route enthusiastically pursued by various breeders.

The productive Kingmambo – Sadler’s Wells cross, responsible for a host of Group 1 winners including Workforce, Henrythenavigator, Virginia Waters and Campanologist, gives us inbreeding to Special, the dam of Nureyev and granddam of Sadler’s Wells. Inbreeding to Urban Sea has also gained real momentum in recent years, an understandable development in light of its Derby-winning representative Masar, while current Classic hopeful Cayenne Pepper is one of 21 stakes horses worldwide inbred to Urban Sea’s dam Allegretta. Inbreeding to Height Of Fashion also boasts recent form via Lockinge Stakes winner Mustashry and the former classy two-year-old Beckford (who is inbred to her son Nashwan).

Inbreeding to a superior mare could again be a talking point come Saturday’s 2,000 Guineas should the Roger Teal-trained Kenzai Warrior oblige. The product of a cleverly designed mating by John and Tanya Gunther, the unbeaten colt is inbred to the Niarchos family’s brilliant miler Miesque – as is Kentucky Derby hopeful Sole Volante; both colts hail from the first crop of the Niarchos’ Classic-winning miler Karakontie.

For now, however, the spotlight is very much on Victor Ludorum, who bounced back from a rusty third in the Prix de Fontainebleau to run out the easy winner of Monday’s Poule d’Essai des Poulains for Godolphin. In the process, the colt provided a fitting tribute to his late sire Shamardal, himself winner of the 2005 renewal of the race who could be on course for a momentous week should Pinatubo live up to expectations in Newmarket’s 2,000 Guineas on Saturday.

Victor Ludorum was bred in Britain by Godolphin out of the Group 3-placed Antiquities, a daughter of Kaldounevees who shares her granddam Helen Street with Shamardal. Thus Victor Ludorum is inbred 3×3 to Helen Street, an Irish Oaks winner herself who also gifted Darley and Godolphin with Street Cry during her stud career.

Prix Jean Prat winner Territories, a popular young stallion for Darley whose first crop are two-year-olds this year, and Australian Group 2 winner Thronum, now at stud for Sun Stud in Australia, are other high-flying descendants at stud.

There have been only 24 runners worldwide inbred to Helen Street. Five of them are stakes horses and of that quintet, each contain the blood of Shamardal in one form or another.

Prior to Victor Ludorum, the chief flagbearer was Lucida, another bred by Darley/Godolphin who won the 2014 Rockfel Stakes and ran second in the 2015 1,000 Guineas for Jim Bolger; by Shamardal and out of a Street Cry mare, she was inbred 3×3 to Helen Street.

Described as a big, rangy filly and an excellent mover, Helen Street represented the essence of Ballymacoll breeding. She was from the second crop of Sir Michael Sobell and Lord Weinstock’s brilliant Derby and King George hero Troy and a direct descendant of Sunny Cove, whose presence within Ballymacoll ran deep as the ancestress of Sun Princess, Prince Of Dance, Spectrum and Conduit among many others.

By the time Helen Street made her debut as a two-year-old in 1984, Troy was sadly dead having succumbed to peritonitis at the age of seven. Helen Street wound up as the best of his progeny on the track, but she wasn’t his only daughter to thrive at stud, with Troy also featuring through the years as the damsire of other Group 1 winners Oath, Pilsudski, Pelder and Westerner.

Turned over to Major Dick Hern, who had guided Troy through his championship three-year-old campaign several seasons before, Helen Street emulated her dam Waterway by winning the Prix du Calvados as a two-year-old. She was also second to Oh So Sharp in the Hoover Fillies’ Mile and as a result, was fancied to take high order among the Classic pecking at three.

However, she was slow to come to hand at three and onlookers didn’t get to see the best of her until the Irish Oaks, in which she justified the high reputation held of her to win easily from Alydar’s Best.

Helen Street looked poised to build on that performance but despite turning in several creditable efforts, she never won again. Sent to the Yorkshire Oaks, she was turned over at odds on in third before failing to trouble the principals in the Irish Champion Stakes. She ended her career by running fourth in both the Champion Stakes at Newmarket and Washington DC International Stakes.

In light of her race record and pedigree, Helen Street would have been expected to have become an elite asset within the Ballymacoll Stud broodmare band. Instead, however, Sir Michael Sobell chose to sell the filly to Sheikh Mohammed, and thus it was within the Darley fold that Helen Street produced each of her 13 foals and ten winners.

Helen Street proved particularly effective with Machiavellian, then one of the stalwart Darley stallions to whom she produced Street Cry and Helsinki, dam of Shamardal.

Despite his supposed turf background, Street Cry developed into an outstanding dirt performer for Godolphin, winning the Dubai World Cup and Stephen Foster Handicap before becoming an outstanding stallion in both hemispheres; few stallions are capable of siring one champion but in Zenyatta and Winx, Street Cry left behind two real titans of the turf while a first-crop son, Street Sense, became the first horse to pull off the Breeders’ Cup Juvenile and Kentucky Derby double.

Helsinki didn’t possess the same level of ability as Street Cry, but she was talented enough to be Listed-placed for Andre Fabre. Shamardal, bred by Brilliant Stable following Helsinki’s sale by Darley for 27,000gns, was by far the best of her seven winners but another, her final foal Geoffrey Chaucer, won the Beresford Stakes for Aidan O’Brien.

Victor Ludorum is a grandson of Helen Street’s other stakes winner Historian, a daughter of Pennekamp who was trained by Henri-Alex Pantall to win the 2002 Prix Rose de Mai over an extended 1m2f at Saint-Cloud.

Kaldounevees isn’t a name seen today in many high-end pedigrees but he was a fine servant to the Devin family at Haras du Mesnil in France. By 2004, he was standing for a career high of €12,500 in the aftermath of the exploits of his Group 1-winning son Ange Gabriel and attracted the attention of Darley, who sent Historian. The result was Antiquities, a two-time winner for Andre Fabre who ran second in the 2008 Prix Cleopatre, also over an extended 1m2f at Saint-Cloud. Now as a multiple stakes producer, Antiquities has further underlined her worth.

Victor Ludorum is the fifth foal out of the mare and second to perform at a high level after Mary Tudor, one of the best sired by Dawn Approach who won the 2018 Salsabil Stakes and ran third in the Irish Oaks. An older brother to Victor Ludorum named Ancient History is also the winner of five races in France and Australia.

Antiquities also has a two-year-old colt by New Approach named Ages Of Man with Fabre and a yearling filly by Invincible Spirit.

As fate would have it, Shamardal’s death at the age of 18 earlier this year came just as he was hitting the height of recognition.

No European stallion last year could match his achievement of three Group 1-winning two-year-olds, namely champion Pinatubo, Earthlight and Victor Ludorum; remarkably they were produced out of a pool of less than 30 runners bred in the first season that he became a private stallion for the Maktoum family at Kildangan Stud. Victor Ludorum is one of 146 stakes winners and 25 Group/Grade 1 winners for the stallion

A Group 1-winning two-year-old and now a Guineas winner at three, Victor Ludorum already boasts a rich commercial profile that should appeal to breeders down the line. The story is also far from over, with the colt’s racing style and pedigree lending fuel to the idea that next month’s Prix du Jockey Club will be right up his street.

Then there is his pedigree to consider, not only as a Shamardal representative of the famous Helen Street family but one whose family contains no Sadler’s Wells or Danehill blood. All in all, an appealing package for when the time comes for Victor Ludorum to head to stud. 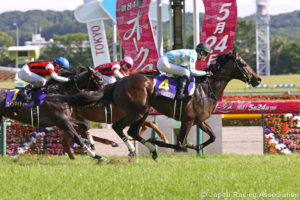 Up Next
Daring Tact hands Epiphaneia a flying start