Less than a fortnight after four-year-old Harlem sold for 520,000gns from the Juddmonte draft at Tattersalls to race on in Australia, it was announced that his sire Champs Elysees had been sold to stand under the National Hunt banner at Castlehyde Stud in Ireland.

His loss to Britain, coinciding with a number of announcements of yet more two-year-olds retiring to stud after being tested on the track for only a handful of months, prompted a strongly-worded letter from Peter Stanley to the Racing Post. Stanley bemoaned, too, the loss of Mount Nelson, who has been relocated to Ireland’s Boardsmill Stud, questioning why two proven stallions with good racing records and a fair share of decent stakes performers to their credit receive such scant support from breeders.

Harlem’s lofty sales price highlights the fact that there are still huge financial rewards for owners with a mind to sell on a horse with proven form. A dearth of staying blood in Australia means that most of that country’s good Cup horses are now recruited from Europe. It’s not just the Melbourne Cup in mind for such horses.

The relative weakness of the staying pool in Australia provides opportunities for horses below the top level in Europe to compete well there, potentially winning a number of Group races along the way and easily recouping a high sales price thanks to the excellent prize-money on offer.

In the case of Harlem in particular, it’s worth recalling that Tom Malone and Joe Tizzard were underbidders on this horse for the Tizzards’ major new owner Alan Potts. National Hunt owners at the top level in Britain and Ireland will dig deep for potential festival runners, but again, usually only for horses with a proven track record.

Patience is its own reward
A chasm exists in the market and it’s not helped by an increasing number of people breeding horses based on who might buy them, rather than which stallion will suit a particular mare both on paper and physically. There’s little desire to race these horses, or often to keep them beyond their foal year.

And when rising foal crops clash with dwindling numbers of owners willing to take a chance on a yearling who might take a year at least to come to hand, we end up with the situation witnessed at Goffs’ November Foal Sale, where the first two days of foal trade registered around a 50% clearance rate. Pinhookers have had fingers burned at the yearling sales and the risk of buying a foal that won’t make it into the better sales next year is now too great for some.

As this issue went to press, the Tattersalls December Sale was about to start, and indeed Tattersalls has cut back on the number of foals this year after laying on an extra half-day session in 2015.

Henry Beeby said in his end-of-sale statement at Goffs that “further reflection will take place over the winter”, presumably regarding whether the company will return to four days of foals instead of five, as has been the case in the last two years. 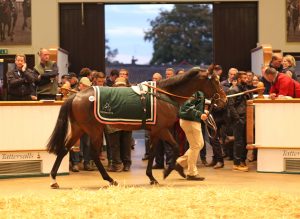 Tom Malone and Joe Tizzard look on as Harlem sells to Australia for 520,000gns

For sales companies, it’s a case of ‘damned if you do, damned if you don’t’. A reduced number of places risks the ire of those breeders whose horses aren’t accepted for sale, while a bloated catalogue affects the figures and creates a negative perception of an auction.

And while official sales figures can’t be relied upon to tell the whole story – we all know that the likelihood is that a number of horses marked as sold have never actually changed hands – they do offer guidance to the state of the industry.

Recent figures, from lower-end yearling sales and from the first round of foals, have issued a very clear warning to breeders to think carefully about next year’s matings and which mares should be covered at all.

Of course it’s up to every individual to decide what to do with their mares but if the market is repeatedly telling you that a particular mare’s stock is unwanted, it’s time to stop breeding from her unless you want to race the offspring yourself.

The continuing sales craze for first-season stallions – who have done nothing wrong but may not ever do anything right – only exacerbates the problem outlined by Stanley, of proven sires being overlooked. The fact that it may not make immediate commercial sense should surely be offset by the hope that in the long run you could be helping a young mare by sending her to a proven stallion who gets plenty of winners. In turn, you could be helping the stallion, too.

Up Next
Optimistic times despite potential advertising ban