Gutaifan clear of the pack

It’s hard to believe that at this point in the season, with so many opportunities for two-year-olds at all levels still ahead, the best first-season sires since 2000 have been approaching 30 individual winners. Iffraaj, who retired to stud in 2007, had already amassed 29 winners by early September.

Some will blaze a trail in the early months of the season. But later in year one and during years two and three, as the focus turns away from precocity and points towards quality, most stallions fall by the wayside, to be replaced by the next generation of shooting stars.

Gutaifan’s excellent total of 25 winners so far is already four clear of where his grandsire Acclamation was in 2007 and three ahead of the number his sire Dark Angel had posted at this stage in 2011.

All the sires since 2000 can be considered fast starters, but for the vast majority it was always going to be their one time in the spotlight. Of the 33 fast starters between 2000 and 2019, 58% have recorded a stakes winner to runner percentage of less than 5% and as many as 12 haven’t managed 3%.

Moreover, the majority failed to improve their mares. And let’s not forget, we are looking only at the better first-season sires here.

However, there are stallions that can manage to be both precocious and long lasting. Dubawi had registered 20 winners by early September on his way to an excellent total of 34. With his stock’s astonishing average improvement of 23lb from two to four on the Timeform scale, he’s become one of the great sires of recent times. It looks very likely that No Nay Never will follow a similar path.

He too had 20 individual winners by this time and he’s sired the winners of the July Cup and Superlative Stakes this year. Significantly, his strike-rate stands at 10.9% stakes winners to runners and it will be interesting to see if he can stay the right side of 10% through his career, which could very much depend on whether he’s a sire of pure sprinters or sprinter-milers.

It could be a big year for @YeomanstownStud’s Gutaifan, the son of Dark Angel will have his first two-year-olds hit the track in 2019 #irishstalliontrail #meetyourheroes pic.twitter.com/cUAQKjTqQW

There is no surprise to see the Irish National Stud’s Invincible Spirit with 24 winners to his name by this stage in 2006. Cape Cross also combined a fast start with ultimate longevity: he had 19 winners by this point and went on to sire such luminaries as Sea The Stars and Golden Horn.

There are several other sires that ultimately became commercial successes. Recorder-breaker Iffraaj, sire of 38 winning youngsters in 2010, has also stood the test of time, siring horses as good as top miler Ribchester (rated 129 by Timeform) in Europe and the 125-rated Turn Me Loose in Australia.

The brilliant Battaash’s sire Dark Angel has built a reputation for tip-top sprinters since his first season with runners in 2011, while Exceed And Excel is widely acknowledged as a source of fast two-year-olds both here and in Australia.

Quite where the latest set of freshman sires end up is anyone’s guess, but there are already some excellent performances among the group.

At the time of writing, Yeomanstown Stud’s Gutaifan is only four behind Iffraaj’s record-breaking pace, while Night Of Thunder, Cable Bay and Due Diligence have also built impressive tallies, as has Gleneagles, sire of Group 2 Royal Lodge Stakes victor Royal Dornoch.

So far, 11 different sires have sired at least one stakes winner. That fact alone marks this group down as one of the most successful in the period.

Only three times in 20 years – 2014, 2009 and 2007 – have there been more sires of stakes winners. And those years launched of the careers of Lope De Vega, Siyouni, Dubawi, Shamardal and Oasis Dream.

Two sires – Night Of Thunder and Due Diligence – have registered three stakes winners apiece and it’s not difficult to see these two, plus the likes of Gleneagles and Golden Horn, continuing to progress later this year and beyond.

Night Of Thunder is also one of only four sires in the past 20 years to maintain a 50%-plus winners to runners strike-rate in 2019 with 18 winners from only 34 runners (53%) – and you can be certain there are more progressive types waiting in the wings.

*Statistics for all sires up to September 8. The latest standings are available on our sire lists. 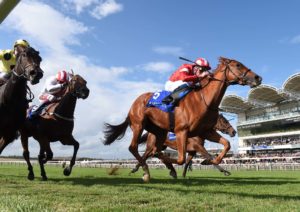