Groomed for success on Dansili quest

By the time a stallion like Dansili reaches the age of 21, they don’t have many secrets.

The veteran Banstead Manor stallion has recently been reaping the rewards of lessons learned several years ago. In fact, it was ten years ago that I first noticed that a son of Danehill was enjoying plenty of success with daughters of Rahy, with the Australian-bred Flying Spur siring three black-type winners from only seven foals.

Dansili at this point had no racing-age offspring out of Rahy mares, but he had two black-type winners – the 2007 two-year-old Group 3 winner Sense Of Joy and the Newmarket Listed winner Quenched – from only eight starters out of mares by the similarly-bred Rainbow Quest. Rainbow Quest and Rahy, of course, were both sons of Blushing Groom and both had Herbager close up in the pedigrees of their dams.

Consequently, my recommendation to Juddmonte was that Rahy’s high-class daughter Tates Creek should visit Dansili in her first season following her transfer from the US to Europe. The resulting foal was a very muscular filly called Walnut Hill who finished an unthreatening sixth of nine in a maiden race at Gowran Park on her only appearance. She was then sold for 14,000gns and is now the dam of youngsters by the Derby winners Pour Moi and Ruler Of The World.

I could have been accused of getting things badly wrong where Tates Creek’s visit to Dansili was concerned, but subsequent events have shown that the theory was bang on target, even if it proved very wide of the mark in practice.

Why does this partnership work so well? With successful nicks the two partners often complement each other physically and this is probably so with Dansili and Rahy

It is this year, though, that has seen the Dansili-Rahy nick reach new heights. The Wertheimer brothers’ filly Esquisse won the Listed Prix de Bagatelle in July and then the Meon Valley-bred Ballet Concerto took Salisbury’s Group 3 Sovereign Stakes on August 17, having previously landed the richly endowed John Smiths Cup. Finally, August 25 saw the 1,000 Guineas fourth Talaayeb gain her first stakes success when she was dropped back to seven furlongs in the Group 3 City of York Stakes.

Why does this partnership work so well? With successful nicks the two partners often complement each other physically and this is probably so with Dansili and Rahy. Dansili has good knees and he also sires plenty of sizeable individuals. Rahy, on the other hand, was a distinctly small individual, standing only 15.1 hands, and he tended to pass on his offset knees. From a pedigree viewpoint, the combination creates 5 x 3 to Blushing Groom, an outstanding racehorse and sire. Plenty of Dansili’s other good winners have two lines of Blushing Groom, including Bated Breath, Proviso and Zoffany.

Unfortunately Juddmonte is unable to experiment further with this Rahy cross as Tates Creek is their only Rahy mare and she will be 20 in 2018. However, she has a likeable 2017 colt by Frankel, whose dam is by Danehill, and she is in foal to Dansili’s son Bated Breath, so the link may yet bear fruit.

Panning for gold with Distorted Humor mares
On the topic of nicks to keep an eye on, the high-class American stallion Medaglia d’Oro is enjoying some excellent results with mares by Forty Niner’s son Distorted Humor. This combination has 9% black-type winners, but its record is more impressive than that statistic sounds, as its four black-type winners comprise two winners at Grade 1 level and two at Grade 2. 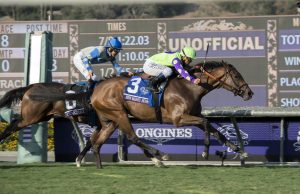 Both the Grade 1 winners are current performers. Both are fillies and both must be worth a considerable amount. The first to shine was New Money Honey, who ended her first season with victory in the Breeders’ Cup Juvenile Fillies Turf at Santa Anita. New Money Honey added another top-level success on turf when she defeated the former French-trained Sistercharlie to take the Belmont Oaks Invitational Stakes in July.

Her connections then decided it was time to try her on dirt and New Money Honey was one of the leading fancies for the historic Alabama Stakes at Saratoga. Unfortunately, the experiment didn’t pay off, with New Money Honey fading into fifth, but victory still went to a filly sired by Medaglia d’Oro from a Distorted Humor mare, in the shape of Elate.

This very progressive filly could hardly have a better female line, as she comes from a long line of stakes-winning mares, her third dam being Wild Applause. Coincidentally, this highly accomplished daughter of Northern Dancer visited Distorted Humor’s sire Forty Niner in 1992 to produce the smart Roar, a stallion who has played a major role in Medaglia d’Oro’s stallion career.

Roar is the broodmare sire of Rachel Alexandra, a filly from Medaglia d’Oro’s first crop who earned Horse of the Year honours and therefore encouraged breeders to send more grand-daughters of Forty Niner to Medaglia d’Oro.

This ploy paid off magnificently once again when West Acre’s daughter Ivanavinalot visited the Darley stallion in 2013. This time the result was Songbird, a nine-time Grade 1 winner who became one of the darlings of American racegoers.

This two-time champion has now been forced into retirement by injury and will be offered at Fasig-Tipton in November, when she will give us a good idea of how much Elate would fetch in the very unlikely circumstance of her ever coming on the market. 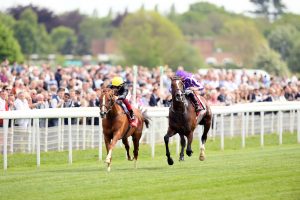 Up Next
Looking forward to a rosier future