Look beyond the label for value
Exclusive Columns

It must be very reassuring for Galileo’s many admirers that the parallels between his stallion career and that of his sire Sadler’s Wells continue to grow. Sadler’s Wells notched 14 sires’ championships in the space of 15 years, whereas Galileo has so far dominated the table in eight of the last nine years. The 2016 season also saw Galileo overtake Sadler’s Wells’s three titles as champion sire of two-year-olds.

There is one difference between the two, though. Sadler’s Wells topped the table of broodmare sires in all seven years between 2005 and 2011 and it was only last year – 35 years after his birth – that he slipped out of the top three in this category for the first time since 2000. Galileo has still to land the title of champion sire of broodmares, but he is surely well on schedule to emulate his sire’s terrific record in this area.

It is essential to remember that success as a broodmare sire tends to grow exponentially, as more and more daughters become producers. This helps explain why only one of the champion broodmare sires of the last 20 years was younger than 20 at the time [the exception was Rahy, who was only 15 in 2000, when he owed the title almost entirely to Giant’s Causeway, the first foal of his first-crop daughter Mariah’s Storm].

Sadler’s Wells was 24 by the time he took the first of his titles, having gained his best previous finish – second place in 2001 – at the age of 20. With this in mind, Galileo has already shown immense promise. Last year saw him finish as high as fourth at the age of 18 and his daughters will have a lot more ammunition for the battle in 2017 – their 2016 total of 1,724 foals of racing age has risen to 2,046. 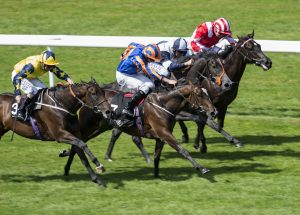 These figures include daughters of Galileo spread throughout the world, including the USA, Japan, Korea, India, South Africa, Brazil, Argentina and Chile. They also include a sizeable number of foals in Australasia, many of them produced by the daughters Galileo sired between 2002 and 2006 in his five seasons as a shuttle sire. In January, one of Galileo’s Australian daughters, Around The Clock, was responsible for Hall Of Fame (NZ), winner of the Group 1 Levin Turf Classic.

There is one significant difference between the stallion careers of Sadler’s Wells and Galileo. Sadler’s Wells always ranked among Europe’s highest-priced, most in-demand stallions, starting out at IR125,000gns in 1985. However, by the time Galileo joined him at Coolmore for the 2002 season, there were still plenty of critics questioning Sadler’s Wells’s ability as a sire of sires.

Although it goes without saying that Galileo has always received quality mares, there were times when the standard fell short of the blue-bloods which flocked to Sadler’s Wells from the start. This is a convoluted way of explaining that Galileo’s daughters with the most consistently strong pedigrees were born from 2008 onwards, so have had comparatively little chance to prove themselves, with the eldest usually having only a couple of foals of racing age in 2016.

A good example is Misty For Me, a Classic winner from Galileo’s 2008 crop. Her first foal, the Fastnet Rock filly Cover Song, won the Grade 3 Autumn Miss Stakes at Santa Anita last October and her second, the War Front filly Roly Poly, won the Group 2 Duchess of Cambridge Stakes before going very close in the Group 1 Cheveley Park Stakes.

In view of the debt that Galileo owes to Danzig-line mares, it is no coincidence that Misty For Me’s Group/Graded winners were both by Danzig sires. These have been the first line of attack for many owners of a Galileo broodmare, to the extent that they accounted for 11 of the 12 stallions which, in 2016, had 18 or more racing-age progeny out of Galileo’s daughters.

War Front doesn’t yet figure among these most prolific sires, but that is about to change. The Claiborne stallion has 13 two-year-olds coming on line in 2017, including a brother to Roly Poly and a daughter of Oaks winner Was. Others are out of Galileo’s Group winners Aloof, Magical Dream, Say, Together and Up.

There are no fewer than 18 yearlings representing the War Front-Galileo cross, with the dams including Gleneagles’ sister Marvellous and her fellow Classic winners Was and Misty For Me. War Front’s son Declaration Of War was also a popular choice for Galileo’s daughters while he was in Ireland, and War Command has three foals in his first crop with dams by Galileo. War Front still has plenty of work to do before he matches Fastnet Rock’s achievements with Galileo’s daughters, which already features ten black-type winners, headed by the Group 1 winners Rivet, Qualify, Intricately and Magicool (in Australia).

Danehill Dancer was another fast son with a pleasing record, which perhaps isn’t too surprising in view of Galileo’s exceptional achievements with Danehill Dancer’s broodmare daughters. Danehill Dancer’s 21 foals with dams by Galileo included Group 3 winner Alexander Pope and an Australian Listed winner, plus three others with ratings over 100.

The partnership with Holy Roman Emperor is also showing potential, as his 2016 two-year-olds confirmed. Among them were the Group 2 winner Rich Legacy and the progressive winners Good Omen and Gemina. Earlier crops included those very useful performers Leitir Mor, Magnus Maximus and Mayfair Lady.

Rock Of Gibraltar is yet another speedy son of Danehill who has enjoyed some success, via the French Group 3 winner Savanne and the South African Grade 2 winner Arcetri Pink. This cross will undergo further scrutiny in 2017, when it will have numerous two-year-old representatives.

Of course, this rush to the Danehill line isn’t producing universally good results – at least not so far. For example, Dansili had 16 racing-age progeny in 2016. None has managed to win at stakes level, but the ex-Irish filly Earring was beaten only a nose in a Grade 3 at Aqueduct. Fortunately, the situation looks set for rapid improvement over the next few years as there are 13 juveniles bred this way in 2017, followed by 14 yearlings.

These youngsters’ dams include such accomplished performers as the Group 1 winners Allegretto, Galikova, Great Heavens, Igugu and Mahbooba. Galileo himself may be heading for a breakthrough with Dansili’s broodmare daughters, as Cliffs Of Moher, his son out of Wave, looked potentially very smart when he won at Leopardstown in October. We have also seen Dansili’s son Strategic Prince sire the dual Group 1 winner La Collina from an unraced Galileo mare.

Green Desert nick yet to sparkle
As yet Green Desert’s sons have achieved rather unexceptional results with Galileo’s daughters, with Oasis Dream, Invincible Spirit and Cape Cross each being represented by a single stakes winner from a joint total of 85 foals of racing age to the end of 2016. Oasis Dream sired the Group 2 winner Hard Dream and the big-earning Oklahoma City. Breeders haven’t lost faith in this cross’s potential, as there are a dozen 2017 juveniles bred this way, plus ten yearlings.

Invincible Spirit’s team of 31 includes the French Group 3 winner Alea Iacta and the useful handicappers Prince’s Trust and Edge Of Sanity. Again, there is still a good chance that there’s better to come, as Invincible Spirit’s 2017 juveniles include seven out of Galileo mares and there are a dozen yearlings to follow.

I should also mention that Green Desert’s grandson Paco Boy has sired the 2,000 Guineas hero Galileo Gold and the useful Imperial Aviator from only five foals, which surely bodes well for Kingman, who has as many as ten first-crop foals with dams by Galileo.
It would be wrong to give the impression that the Danzig male line is the only way to bring out the best in Galileo’s daughters (many of whom already have Danzig in their pedigrees).

It would make sense to combine Europe’s two brilliant stallions, Dubawi and Galileo but, perhaps because of the Godolphin-Coolmore divide, Dubawi had only 16 foals of racing age out of Galileo mares to the end of 2016. However, these 16 featured Night Of Thunder, winner of the 2,000 Guineas, and Dartmouth, winner of the Group 2 Hardwicke Stakes.

There should be more like them, as Dubawi has six two-year-olds and 13 yearlings to look forward to in 2017. A very well qualified mare is needed to access Dubawi these days and the Galileo mares responsible for his youngsters include the stakes winners Dalkova, Galatee, Galikova, Galvaun, Gemstone, Golden Lilac, Great Heavens, Lil’wing, Nightime, Opera Gal, Soon and Vita Nova.

Shamardal is another top-class stallion whose supply of Galileo mares is probably limited. This combination had only 17 foals of racing age but among them were Group winners Balios and Subway Dancer. This suggests Shamardal would benefit from receiving many more daughters of Galileo but he has only two 2017 juveniles bred this way and three 2017 yearlings.

The limited access to Shamardal appears to have benefited his talented son Lope De Vega. Already the sire of two Listed winners from 14 foals out of Galileo’s daughters, Lope De Vega looks poised to become a leading option. Although he has only three 2017 juveniles, he has 12 yearlings with dams by Galileo.

Dark Angel has enjoyed a rise through the ranks which could be likened to those made by Ahonoora, Indian Ridge and Pivotal, and this will inevitably affect the type of mare he receives (especially with his 2017 and 2018 crops, sired at the increased fees of €60,000 and €65,000).

The three rags-to-riches stallions mentioned here all coped well with the change from fast commercial mares and we will soon have a chance to see how Dark Angel copes. His 2015 foals, sired at €27,500, include seven out of Galileo mares, and there are also five 2016 foals. Dark Angel’s sire Acclamation has eight winners from nine starters out of Galileo mares, without siring anything special.

European breeders generally seem intent on sending Galileo’s daughters to the speedier stallions, but there are plenty of exceptions. The Coolmore team will be closely monitoring Camelot’s five first-crop foals out of daughters of his fellow Derby winner. Al Shaqab paid €320,000 for one of them, a filly out of Effervesce. Like Authorized, another son of Montjeu with a Group 3 winner out of a Galileo mare, Camelot creates 3 x 3 to Sadler’s Wells.

Incidentally, Jim Bolger has gone one step further, as his Galileo mares have a two-year-old and two yearlings by Dawn Approach which are inbred 3 x 2 to Galileo. The Prix du Jockey-Club winner Le Havre has also shown what he is capable of, siring the excellent La Cressonniere from a non-winning Galileo mare.

Unusually for the speed-obsessed Australians, the 2013 Melbourne Cup winner Fiorente, by Monsun, has five first-crop foals out of Galileo mares. Perhaps the days of foreign-breds dominating the Cup are numbered.

Up Next
Look beyond the label for value