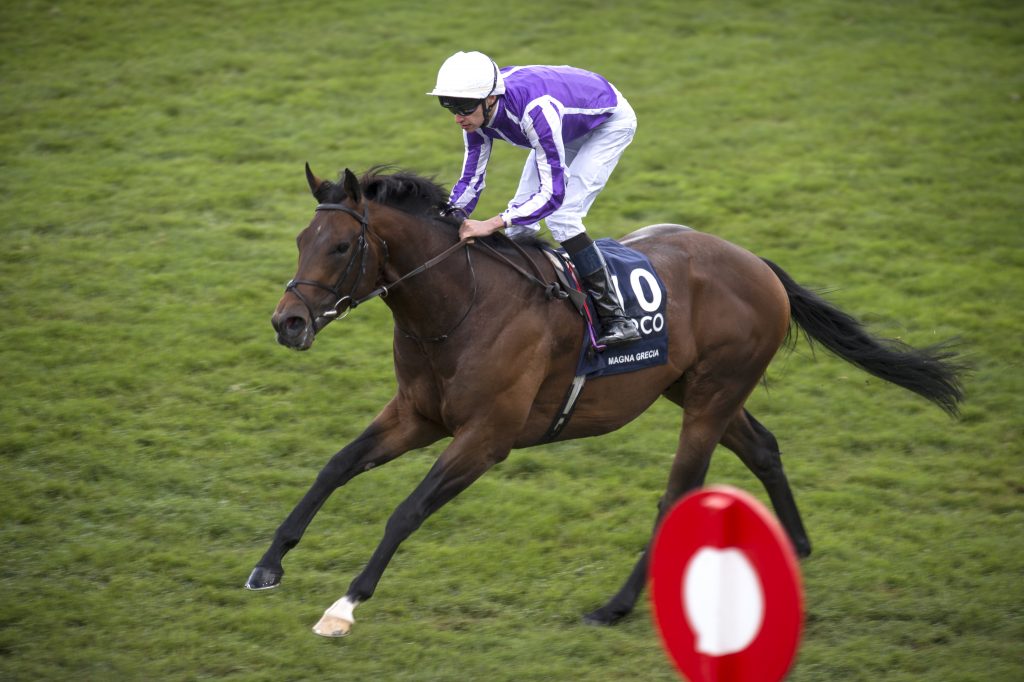 Magna Grecia: the third 2,000 Guineas winner in four years out of a mare by Galileo – Photo: George Selwyn

Back in the March edition of 2017, I commented that the parallels between the stallion careers of Galileo and his sire Sadler’s Wells were growing, and the situation remains the same 27 months later. Sadler’s Wells notched up 14 sires’ championships in the space of 15 years, whereas Galileo has so far topped the table in ten of the last 11 years. The 2017 season also saw Galileo extend his lead over Sadler’s Wells as a champion sire of two-year-olds, with five titles to his sire’s three, and the victory of Churchill in the 2,000 Guineas meant that Galileo had matched his sire’s total of three winners of the first colts’ Classic.

However, the main point of the 2017 article was to compare the records of father and son as sires of broodmares. I mentioned that Sadler’s Wells had been 24 by the time he recorded the first of his seven consecutive titles as champion broodmare sire, though he had taken second place at the age of 20 in 2001.

There is little doubt that Galileo is on schedule to beat Sadler’s Wells’ achievements in this area. As a 19-year-old in 2017, he finished a fine third behind Pivotal and Sadler’s Wells and he then matched Sadler’s Wells’s second place at the age of 20, when he was again outpointed by the evergreen Pivotal. So can he move up another place to take the 2019 title? The signs are encouraging, as Galileo held a narrow lead over Pivotal following Newmarket’s Guineas meeting.

This lead reflected the fact that – for the third time in four years – a daughter of Galileo was responsible for the winner of the 2,000 Guineas, with Magna Grecia following in the footsteps of Galileo Gold and Saxon Warrior. Each of the three was sired by a different stallion, but Galileo Gold is by a grandson of Green Desert, in Paco Boy, whereas Magna Grecia is by a son, Invincible Spirit.

Of course the broodmare sire championships referred only to Britain and Ireland, but Galileo’s daughters have also been in fine form in other parts of the world. In France they have been responsible for Ghaiyyath, the Dubawi colt who landed the Prix d’Harcourt, and Watch Me, an Olympic Glory filly who took the Prix Imprudence. The unbeaten UAE Jewel, winner of the Newmarket Stakes, looks likely to add to the impressive results that Dubawi has enjoyed with Galileo’s daughters. It is also noticeable that the Coolmore partners are now following this route, with 2019 foals out of the Group 1 winner Alice Springs and Listed winner Kissed.

Magna Grecia is disputing the title of star of the show with The Autumn Sun, a colt out of Galileo’s Irish-bred daughter Azmiyna. The Autumn Sun improved his record to eight wins from nine starts when he landed the Rosehill Guineas in March, with as many as five of his wins coming at Group 1 level, from seven to ten furlongs.

Unfortunately, he has been deemed too valuable to continue racing at four and he will embark on his stallion career at a fee of A$77,000. He faces the stiff task of stepping into the shoes of his recently-deceased sire Redoute’s Choice at Arrowfield. Bearing in mind that two of Arrowfield’s other stallions by Redoute’s Choice are standing at higher prices than The Autumn Sun – Snitzel at A$220,000 and Not A Single Doubt at A$110,000 – there will be plenty of breeders prepared to bet that The Autumn Sun will add to Redoute’s Choice’s reputation as a highly effective sire of sires.

Interestingly, The Autumn Sun isn’t the highest-priced of Australia’s freshman sires for 2019, that distinction going to Snitzel’s fast son Trapeze Artist at A$99,000. 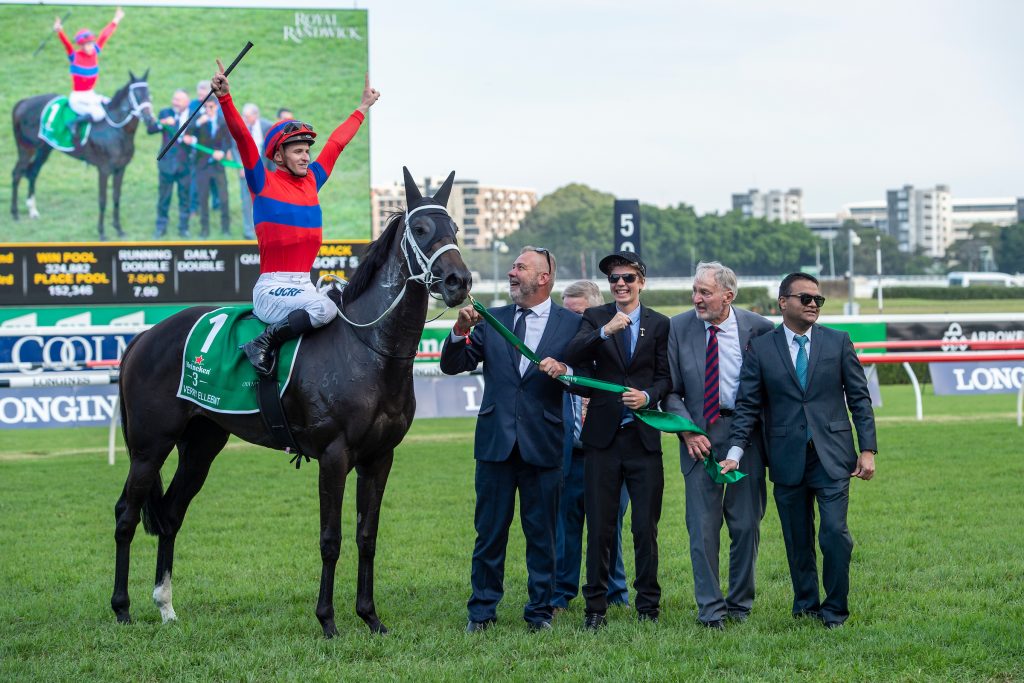 That very rare creature, the blue-hen broodmare, can come from unexpected sources, as we were reminded when Prince Khalid Abdullah’s Obligate decisively maintained her unbeaten record in the Prix des Lilas on May 6. This Listed victory at Chantilly made the daughter of Frankel the 12th black-type winner descending from that exceptional producer Hasili, her dam, the unraced Responsible, being Hasili’s final foal, produced when Hasili was 20.

It is easy to forget that Hasili wasn’t exactly fashionably bred, with both her sire Kahyasi and her broodmare sire High Line usually passing on an unfashionable amount of stamina.

Another excellent broodmare with some unfashionable names in her pedigree was the British-bred Cotehele House. Born in May 1980, she was sired by My Swanee, a horse who would almost certainly not be given a chance as a Flat stallion in today’s industry, even though he won 17 times during five seasons as a racehorse.

For the first four of those seasons My Swanee was rated no higher than 106 by Timeform, but a remarkable final year of action saw his rating soar to 122, thanks to six victories from 15 starts which stamped him as an outstanding handicapper. Versatile as to ground and distance, it extended to showing good form over hurdles. Predictably, My Swanee was to sire nothing nearly as good as himself and ended up in Italy.

Another less-than-compelling aspect of Cotehele House’s pedigree was the presence of Pieces Of Eight as her broodmare sire. Although he ranked among the comparatively few horses to win the Eclipse Stakes and Champion Stakes, and had a Cheveley Park Stakes winner as his second dam, Pieces Of Eight proved to be a poor stallion, both in the USA and Britain, and he too was moved on to Italy.

So why would an Australasian breeder want to import Cotehele House? The answer is that she was a daughter of Eight Carat and granddaughter of Klairessa, from a highly distinguished female line which traced back through Sun Princess, Mumtaz Begum and Mumtaz Mahal to the celebrated Lady Josephine.

Klairessa found fame as the dam of the top-class sprinting filly Habibti and Eight Carat qualified for the title of blue hen in New Zealand, where she produced the Australian Group 1 winners Octagonal, Mouawad, Kaapstad, Our Marquise and Our Diamond Lover.

Cotehele House’s daughters have also helped extend her influence, with her Sackford filly Theme Song playing the lead role. Theme Song is the second dam of the lightly-raced Zabeel horse Zed, as well as being the third dam of the Group 2 winner Deep Field and his Group 1-winning three-quarter brother Shooting To Win.

Zed, Deep Field and Shooting To Win are all stallions and the first two feature in the latest phenomenon – Group winners inbred to Cotehele House. Group 1 winner Verry Elleegant, successful in this year’s Vinery Stud Stakes and Australian Oaks, is by Zed and her dam Opulence is a great-granddaughter of Cotehele House, so she is inbred 4 x 4 to the daughter of My Swanee.

Then there’s two-year-old Cosmic Force, this year’s winner of the Pago Pago Stakes who is one of the best performers from the first crop of Deep Field. With a dam by Commands, Cosmic Force has Cotehele House in his fifth and third generations. There are also Group winners inbred 2 x 3 and 3 x 3 to Cotehele House.

This promises to be another example of great oaks growing from little acorns.