As Queen once sang, the story of 2016 was all about Galileo, Galileo, Galileo – and not only in Europe. In the US, Highland Reel, Mondialiste, Photo Call and Deauville all enjoyed Grade 1 success, while in Australia the former Irish-trained The United States won the Group 1 Ranvet Stakes.

Altogether Galileo topped the world’s stallions in virtually every category except prize-money, with 30 Group winners among his 39 black-type winners. His 14 individual Group/Grade 1 winners left Dubawi and Tapit trailing. 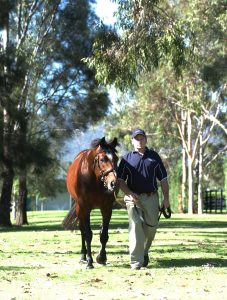 Galileo at Coolmore Australia’s base in the Hunter Valley

It is tempting to speculate just how far Galileo’s influence will spread in the coming decades, as he already has well-qualified stallion sons scattered throughout the thoroughbred world. For example, he has Group 1-winning sons standing in Kentucky, Maryland (the Grand Prix de Paris and Irish Derby runner-up Seville) and Florida (Irish Derby and Secretariat Stakes winner Treasure Beach).

The young Kentucky-based sons are Magician and Noble Mission. Magician retired to Ashford Stud in 2015 and is credited with 77 live foals in 2016.

Noble Mission arrived at Lane’s End Farm not long after his victory in the QIPCO Champion Stakes. Buoyed by the brilliant exploits of his older brother Frankel, Noble Mission covered 146 mares at a fee of $25,000 in his first season, for 116 live foals.

Unlike Magician, Noble Mission was well represented at the weanling sales, with his colt out of Seal Of Approval selling for $210,000 and a filly out of Shared Dreams for $135,000. No doubt Frankel’s exceptional start – and the popularity of some of Noble Mission’s weanlings – will benefit Noble Mission during the 2017 season. However, he experienced the common fall in demand between his first and second seasons, with his second book being less than half the size of his first.

Frankel stirs in Japan
Frankel, of course, has been flying the flag for Galileo with his runners in Japan, where his daughters Soul Stirring and Mi Suerte ended their juvenile careers by starting favourite for Japan’s most important two-year-old races. Soul Stirring passed her test, with this daughter of Stacelita keeping her unbeaten record intact in the Grade 1 Hanshin Juvenile Fillies.

Although Mi Suerte started favourite for the Grade 1 Asahi Hai Futurity, she was opposed by 16 colts and in the circumstances wasn’t disgraced in finishing fourth.

Japan’s only stallion son of Galileo is Cape Blanco, who numbered the Irish Derby among his five top-level wins. He was recruited after he had spent three seasons in the US and has 93 foals in his first Japanese crop, foaled in 2016.

It is easy to forget that Galileo didn’t set the world alight when he shuttled to Australia for five seasons early in his career. Because two of his three male Group 1 winners, Niwot and Linton, were geldings and the other, Sousa, was exported, Galileo will be dependent on shuttle sires or imported stallions if he is to become a successful sire of sires in Australia.

The Australian Stud Book currently lists just four stallion sons of Galileo, two of which were not stakes winners. Coolmore relies on Adelaide, a Cox Plate and Secretariat Stakes winner who represents the Galileo-Danzig cross. He stood his first season at a fee of AUS$22,000, covering 98 mares in 2015, but his book rose to 116 mares when his fee was reduced to AUS$16,500 in 2016.

Darley has a higher-profile son in Teofilo, the champion juvenile who returned to Australia for the 2016 season after an absence of two years. His return was at a fee of AUS$44,000 – double the price he had commanded in his five earlier visits to Australia. Clearly these earlier crops have done well. The first contained Sonntag (Group 1 Queensland Derby) and Group 2 winner Happy Clapper.

However, having a dam by Danehill must limit Teofilo’s options in Australia and he apparently covered only 64 mares on his 2016 return to Australia, when he was joined by his son Kermadec on the Darley roster.

Similarly, Darley Australia depended on New Approach’s son Dawn Approach in 2016. New Approach shuttled to Australia for four years between 2009 and 2012, with the Schweppes Australian Oaks winner May’s Dream being the best of his Group winners.

Perhaps New Zealand, with its proven record for producing high-class stayers, would be a more natural home to Galileo’s sons. The disappointing Rip Van Winkle has a couple of Group 2 winners there.

The South African industry has frequently shown itself capable of producing performers of international class, so what might it achieve with sons of Galileo? The best-performed son is Kingsbarns, the Group 1 Racing Post Trophy winner who experienced a difficult first season under the Coolmore banner before following another former Coolmore stallion, Duke Of Marmalade, to Drakenstein Stud. Bush Hill Stud is home to Flying The Flag, winner of the Group 3 International Stakes at the Curragh in 2013.

Although a Group 3 win isn’t often the basis for a successful stallion career, Flying The Flag also has the advantage of being a son of an Irish 1,000 Guineas and Nassau Stakes winner and a brother to Rhododendron, one of 2016’s leading juvenile fillies.

Ascot Stud acquired Global View, a winner at Group 2 and Group 3 levels at around a mile on turf in the US, to make his stallion debut in 2016. Together with the Group 1 winners Gleneagles, Churchill, Marvellous, Misty For Me and Ballydoyle, Global View represents the highly potent Galileo-Storm Cat cross, so he is another with more to offer than just a smart racing record.

The idea for this article came to mind following the Gran Premio Carlos Pellegrini in Argentina on December 17. The roll of honour for this famous all-aged event features Forli, a horse who left Argentina for a distinguished stallion career in Kentucky. It is doubtful whether the latest winner, Sixties Song, will achieve similar fame but he still represents a feather in the cap of Sixties Icon.

Swinging start for Sixties
Sixties Icon is a perfect example of a stallion who has had to struggle for support far more than he should have in an industry where precocious speed is increasingly being prized over middle-distance prowess. With a Derby winner as his sire and an Oaks winner – Love Divine – as his dam, Sixties Icon was bred to shine at the top level and that is exactly what he did.

A Group winner at three, four and five, he committed the cardinal sin of winning the St Leger. Consequently, he stood for £6,000 when he retired to Norman Court Stud, but even so, breeders did not stampede to his door. His first three crops numbered 40, 28 and 17 foals, but then Sixties Icon surprised just about everyone except Mick Channon by siring eight first-crop two-year-old winners from only 17 runners in Britain and Ireland. Three earned black type, including the Group-winning Chilworth Icon.

This bright start prompted a surge in interest during the 2012 and 2013 seasons, the result being crops of 50 and 64. While crops of these sizes still left Sixties Icon at a considerable numerical disadvantage against the most fashionable stallions, they helped him add to his black-type performers. Epsom Icon, Czabo and Harrison all did well in 2016, when the five-year-old Nancy From Nairobi won the Grade 2 Royal Heroine Stakes on turf in America.

Sixties Icon shuttled to Argentina in August 2012, for the first of five successive seasons at Haras La Pasion. Unlike in England, there was considerable demand for his services and he covered 126 mares for 100 foals. His figures for the next three years were 75 foals from 115 mares covered in 2013, 52 foals from 81 mares in 2014 and 74 foals from 118 mares in 2015. 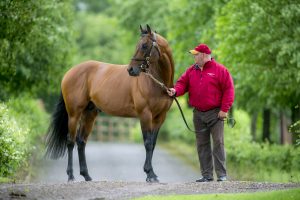 Blissful Song was imported to Argentina in June 2011 by Haras Firmamento, while carrying a Candy Ride filly conceived to southern hemisphere time.

Candy Ride, of course, was bred in Argentina, where he enjoyed Grade 1 success before being transferred to the States. Now firmly established among Kentucky’s leading stallions, Candy Ride added another Graded winner to his tally in the form of Blissful Song’s filly. Named Celestial Candy, she has landed four Graded stakes at up to a mile, winning on both dirt and turf.

Blissful Song has had four foals since then, producing the winning filly Harlan’s Song by the accomplished American shuttler Harlan’s Holiday and then Sixties Song. She has a fine pedigree, as her half-sister Celestial Woods is the dam of Lanwades’ new stallion Bobby’s Kitten. Their dam Celestial Bliss was a half-sister to the champion turf horse Paradise Creek and his fellow Grade 1 winners Forbidden Apple and Wild Event.

Sixties Icon isn’t the only Galileo stallion to enjoy Grade 1 success in South America. The Irish Derby winner Soldier Of Fortune – now part of Coolmore’s National Hunt team – was represented in 2016 by Rey del Rock and Nieta Querida, while the Derby Italiano winner Cima de Triomphe was responsible for the turf Grade 1 winners Besitos and Missile Top in Argentina.

Soldier Of Fortune’s brother Heliostatic also got into the act, despite having only 14 runners in Argentina. His son He Runs Away took two legs of the 2016 Triple Crown – the Gran Premio Jockey Club and Gran Premio Nacional.

Up Next
What a wonderful racing world