Late Japanese stallion has earned respect from a number of breeders, especially Coolmore

Although it’s just over a year since Japan lost Deep Impact at the age of 17, the scale of the superstar stallion’s legacy is still to be determined. With the Japanese Stud Book crediting him with 158 three-year-olds, 141 two-year-olds and 109 yearlings, he appears to be well equipped to add to his eight consecutive sires’ championships in the coming years.

Indeed, he is well on his way to a ninth Japanese championship this year, thanks partly to a scintillating classic double from his unbeaten son Contrail and Group 1 successes from Fierement and Gran Alegria.

But these three-figure crops – generally produced by large numbers of Group/Graded-winning mares – may struggle to match Deep Impact’s final crop, even though it numbers only around 20 foals. This final crop looks capable of providing the Shadai star with a fitting last hurrah.

It also reflects the enormous respect which Deep Impact earned from non-Japanese breeders, especially from the Coolmore partners in recent years.

The foals include a brother to the 2,000 Guineas winner Saxon Warrior, out of the champion two-year-old filly Maybe, as well as colts out of the Group 1 winners Hydrangea and Rhododendron, who were both sired by Galileo from daughters of Pivotal. Hydrangea of course took the Matron and British Champions Fillies’ and Mares’ Stakes, while Rhododendron was a winner at the top level at two, three and four, in addition to finishing second in the 1,000 Guineas and Oaks.

The fillies from Deep Impact’s final crop also include the first foal of the exceptional Minding, whose five Group 1 victories in 2016 included the 1,000 Guineas, Oaks and Queen Elizabeth II Stakes. The Niarchos Family also has a 2020 foal by the stallion who supplied them with the classic winners Study of Man and Fancy Blue, this being a filly out of Malicieuse, a half-sister to those top colts Bago and Maxios.

Hydrangea, Malicieuse, Maybe, Minding and Rhododendron are all daughters of Galileo, the motivation for their being sent to Deep Impact in 2019 largely stemming from Saxon Warrior’s 2,000 Guineas success a year earlier. An exception to the rule is Singspiel’s daughter Hibaayeb, who produced a 2020 filly for Godolphin. A winner of the Group 1 Fillies’ Mile and Group 2 Ribblesdale Stakes, Hibaayeb is the dam of Wuheida, who defeated Rhododendron in the Group 1 Breeders’ Cup Filly & Mare Turf.

The strong interest in Deep Impact as a mate for Galileo’s daughters partly reflects the shortage of viable outcross options for them in Europe, but it was also driven by some promising early results for the pairing, which combines Europe’s predominant sire line with Japan’s. It’s worth reminding everyone that Galileo and his sire Sadler’s Wells have monopolised the Anglo-Irish sires’ championship in 25 of the last 30 years, while Deep Impact and his sire Sunday Silence have jointly taken 21 of the last 25 in Japan.

Bearing in mind that Galileo’s progeny have an average winning distance of 11.2 furlongs, Deep Impact may not have been an obvious choice, in view of his victories in the Japanese St Leger over 3,000 metres and the Tenno Sho over 3,200. I have come to the conclusion that these long-distance victories gave a rather misleading perception of Deep Impact. 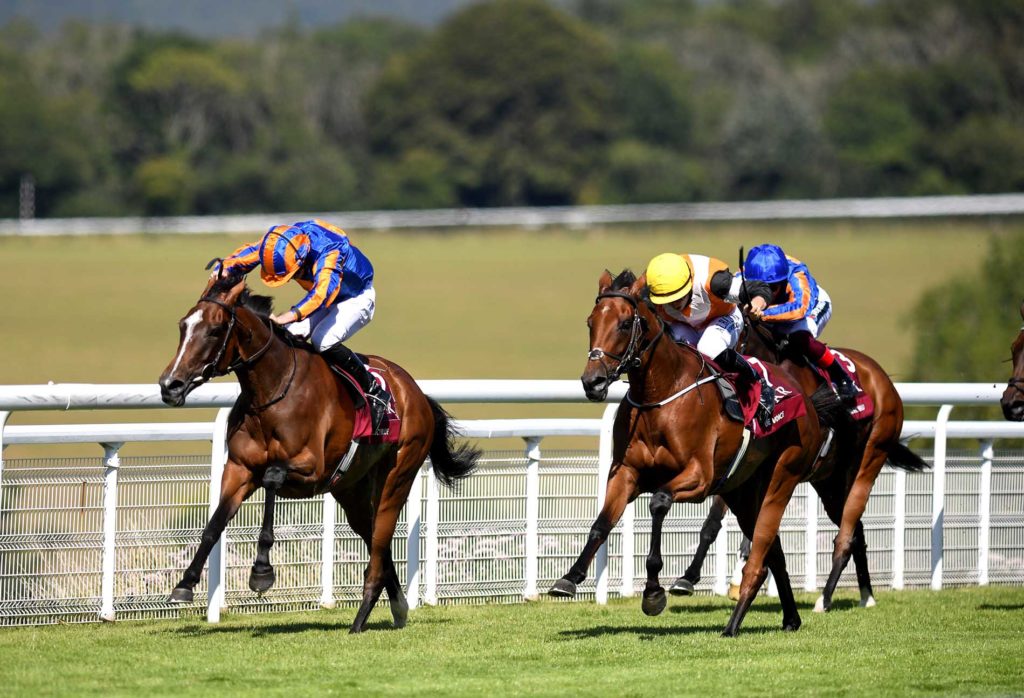 Fancy Blue is the latest star to have emerged for the late Deep Impact – Photo: George Selwyn

Although he was certainly bred to shine at up to a mile and a half, his pedigree isn’t that of an out-and-out stayer, and this suspicion has been reinforced by the multiple Group 1 successes by his progeny over a mile. Among them are five daughters who took the Oka Sho, the 1600-metre equivalent of the 1,000 Guineas, and there have also been victories for Beauty Parlour in the French 1,000 Guineas equivalent and for Saxon Warrior in the 2,000 Guineas.

More recently, Deep Impact’s latest European star, Fancy Blue, has completed a Group 1 double at around 2,000 metres in the Prix de Diane and the Nassau Stakes, having finished second in the Irish 1,000 Guineas. We also saw Deep Impact represented by his first black-type winner out of a grand-daughter of Galileo when the very progressive Katara – out of a New Approach mare – won the Chalice Stakes impressively at the start of August.

The performance of Deep Impact’s progeny out of Galileo’s daughters have confirmed that this isn’t a recipe for stayers – at least where the Galileo mares possessed an element of speed. Lily of the Valley, a winner of the Group 1 Prix de l’Opera over 2,000 metres, is the dam of Vanquish Run, who lined up for the 2016 Japanese Derby as a winner of three of his four three-year-old starts, including a Group 2 over the Derby distance.

The nick’s next Graded winner was the filly Cantabile, out of the minor ten-furlong winner Chanrossa. Cantabile won Group 3 and Group 2 events over 1,800 metres prior to her third behind the excellent Almond Eye in the Group 1 Shuka Sho over 2,000 metres. Saxon Warrior, of course, reached the frame in both the Derby and Irish Derby, but later gave the impression than a mile and a quarter suited him a good deal better.

We will learn more about the cross later this year, as there are seven two-year-olds bred this way. Two of them have already won, namely Snowtime and the Niarchos-bred Harajuku, who looked potentially very useful when she landed a Chantilly maiden on her debut in July. It may also pay to watch out for Aidan O’Brien’s National Ballet, as this colt is out of Fluff, a winning sister to Saxon Warrior’s dam Maybe.

Deep Impact also has several other very well-connected two-year-olds in Europe, including youngsters owned by The Queen, the Wertheimer brothers, Al Shaqab and Teruya Yoshida. The Yoshida youngster – Sentimental Mambo – is particularly interesting, as this Andre Fabre-trained filly is a daughter of the outstanding Stacelita, which makes her a half-sister to the Japanese champion Soul Stirring. The Wertheimer colt, Soupir, is out of Sasparella, a Group 3 1,200-metre winner as a two-year-old. The Queen’s filly Portfolio is with Sir Michael Stoute, who trained the filly’s dam Diploma to become a Listed winner with a Timeform rating of 116.

And if that isn’t enough to look forward to, Deep Impact’s current yearlings include a filly out of Winter, another of Galileo’s multiple Group 1-winning daughters. This 2019 crop also contains several youngsters which starred at the recent JRHA Select Yearling Sale, where Deep Impact’s progeny were responsible for eight of the top nine prices. Twelve sold for an average equivalent to just over £1.5 million.

Part of the appeal of buying one of Deep Impact’s high-priced sons is that he might develop into a high-class stallion after he’s proved his worth on the track. Deep Impact’s most successful stallion son so far is Kizuna, the 2013 Japanese Derby winner who also landed the Group 2 Prix Niel before finishing fourth in the Arc. In assessing any Japanese stallion it must be remembered that the International Cataloguing Standard’s 2020 book lists 129 Japanese Graded races, compared to a combined total of nearly 400 in Britain, Ireland, France and Germany, 446 in the USA and 330 in Australia.

In the circumstances Kizuna has made an encouraging start, siring five Graded winners – Ablaze, Bien Fait, Crystal Black, Deep Bond and Maltese Diosa – in his first crop. Kizuna is bred to the same Deep Impact-Storm Cat cross as Study of Man, the Prix du Jockey-Club winner who has completed his first season at Lanwades Stud. With Saxon Warrior based at Coolmore, both these Classic winners could have important roles to play in extending Deep Impact’s influence in Europe. 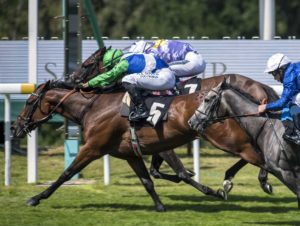