From Johannesburg to Chile

Over the years, we have become all too accustomed to hearing Aidan O’Brien hail his latest star as probably the best he has ever trained. Well, I don’t know whether anyone has ever claimed that Johannesburg, the champion two-year-old of 2001, was the most talented juvenile to have passed through O’Brien’s hands, but this American-bred son of Hennessy was surely the most accomplished.

Seven starts yielded seven victories, the last six of them coming at Group level. The first of those Group victories came at Royal Ascot, when Johannesburg was fairly unspectacular in winning the Group 3 Norfolk Stakes by just over a length.

It is interesting to recall that Michael Tabor told the Racing Post that “this is obviously a decent horse and he is up there, but is not the best [in the yard]. There is a nice Group race in him, one would have thought.”

Tabor must have been surprised by the colt’s subsequent efforts. Johannesburg proved himself unique among two-year-olds by becoming a Group/Grade 1 winner in four different countries, progressing from the Phoenix Stakes in Ireland to the Prix Morny in France, the Middle Park in England and finally the Breeders’ Cup Juvenile in the USA.

This sequence – achieved in the space of less than ten weeks – surely demanded extraordinary toughness and versatility. He won from six furlongs to eight and a half, as well as on yielding turf and fast dirt. He had also won on fast turf earlier in the season. His temperament must also have been bombproof, as he coped extremely well with a lot of travelling and changes of scene.

Unfortunately, Johannesburg’s exploits in his first season proved to be something of a false dawn – and the same was to happen when he took up stallion duties at Ashford Stud in Kentucky. Perhaps he wasn’t helped by being aimed at the Kentucky Derby, over a distance beyond his capacity, but the end result was three starts and no further wins.

This anti-climactic end to his racing career limited Johannesburg’s initial fee to $30,000, at a time when his grandsire Storm Cat was priced at $500,000. However, Johannesburg was still able to show the same sort of precocious brilliance that had been the hallmark of his racing career.

His first crop, numbering 144 named foals, produced the very creditable total of 15 stakes winners, of which ten – nearly 7% – were successful at Graded/Group level, including the Group 1 Prix d’Ispahan winner Sageburg.

The star of the show, though, was Scat Daddy, who won three of his five juvenile starts, including the Group 1 Champagne Stakes, to be ranked the second-best American two-year-old of 2006, behind the future Kentucky Derby winner Street Sense. Scat Daddy was also a leading contender for the Kentucky Derby, following his win in the Grade 1 Florida Derby, but he suffered a slight tendon injury in the race.

Because he needed to be rested for three months, there wasn’t enough time to bring him back for the major autumn races, so the decision was taken to retire him. The timing of Scat Daddy’s stud debut in 2008 wasn’t perfect. The success of Johannesburg’s first crop was proving to be another false dawn. His second and third crops failed to produce a top-level winner and his only other Grade 1 winner, Strapping Groom, didn’t achieve that status until he was a six-year-old in 2013.

By then Johannesburg was long gone. His departure for Japan was announced in October 2009. It is sad to report that he had only 15 registered foals born in 2013 and again in 2014, but he bounced back after an encouraging start by his first Japanese runners in 2013, to the extent that he had 93 foals in 2015. It will be fascinating to watch their progress when they reach the track next year.

Scat Daddy probably also wasn’t helped by Johannesburg’s record during the five years he was shuttled to Australia. Johannesburg sired only four Group winners from over 400 foals (but two of them, Turffontein and Once Were Wild, were Group 1 winners).

So, with Australia ceasing to be an option for Scat Daddy, he was shuttled to Chile from 2009 to 2011. He was next scheduled to shuttle to Argentina in 2013 but the visit had to be aborted when he suffered a severe bout of dehydration early in his journey.

His legacy in Chile has been particularly rich, with his progeny often dominating the Grade 1 events.One of his Chilean champions, Dacita, has successfully transferred her skills to the US, where she has won a pair of Grade 2 turf contests.

Interestingly, with Scat Daddy no longer available, Chile has turned to his younger brother Grand Daddy, whose only stakes success came at Turfway Park. Grand Daddy has proved an instant hit, matching his brother’s feat of siring the first three in a Group race and in June his sons Gran Carboncillo and Big Daddy were first and second in the Grade 1 Clasico Tanteo de Potrillos.

Scat Daddy has proved himself a worthy son of a champion two-year-old. Tragically his greatest successes have come too late for him to capitalise on them, as he died suddenly at the age of 11 in December 2015. For much of 2015 he had looked certain to end the year as America’s champion sire of two-year-olds, only to be denied by Uncle Mo’s late surge. He set a new record of nine stakes-winning two-year-olds (from a crop of 154), with no fewer than six of the nine winning at Graded/Group level.

Acapulco stunned everyone when she dwarfed the opposition, both in the paddock and in the race, in the Group 2 Queen Mary Stakes. This was Scat Daddy’s second major juvenile success at the Royal meeting, as No Nay Never had emulated Johannesburg’s Norfolk Stakes success in 2013, before going on to take the Group 1 Prix Morny. 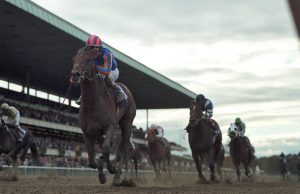 Now Scat Daddy has boosted his score to four, thanks to a spectacular double at the 2016 renewal.

The unbeaten Caravaggio shaped like a potential champion when he quickened to land the Group 2 Coventry Stakes but even he was overshadowed a day later when the American-trained Lady Aurelia followed in Acapulco’s footsteps in the Group 2 Queen Mary Stakes. In scooting seven lengths clear she earned the very high Racing Post rating of 123.

It is worth pointing out that No Nay Never was sired at a low point in Scat Daddy’s popularity, and belonged to a crop of only 53. Caravaggio and Lady Aurelia, on the other hand, were conceived in 2013. By then Scat Daddy had narrowly taken the title of champion first-crop sire in 2011 and finished a good second among the second-crop sires of 2012.

Coincidentally, the pedigrees of Caravaggio and Lady Aurelia both contain the stallion Great Above (sire of Caravaggio’s broodmare sire Holy Bull and of Lady Aurelia’s third dam Blue Eyed Cat). The presence of this former Florida-based stallion could help explain why they are so fast.

Although he was a late bloomer (he didn’t become a stakes winner until he was five), Great Above set a track record in winning the Grade 3 Toboggan Handicap over six furlongs. He was also a son of the flying filly Ta Wee, who twice took the title of champion sprinter in the USA – a feat matched by her half-brother Dr Fager.

While on the topic of top sprinters, it mustn’t be forgotten that Scat Daddy is inbred 4 x 2 to Mr Prospector, who gained both of his stakes successes over six furlongs. This inbreeding could be significant when Tapit, another highly successful American stallion, is inbred 3 x 4 to the legendary Claiborne stallion. Then there’s Flower Alley, a stallion inbred 3 x 3, who numbers the Kentucky Derby and Preakness winner I’ll Have Another among his progeny.

Up Next
Time to say goodbye to system from bygone age