There are precious few stallions that can be relied upon to sire the winner of the Derby and Oaks. Most don’t produce stock with the necessary aptitude, whilst only a handful get runners with the right combination of class and aptitude. It seems that most Derby and Oaks winners these days must have Galileo close up in their pedigree, or at least his dam Urban Sea, which then includes runners by Sea The Stars.

For all his dominance, Galileo is still in the process of overhauling his sire’s 288 stakes winners, although he has already passed Sadler’s Wells’ tally of Group winners and has sired an identical 72 Group 1 winners. But time alone will take care of these matters. The three core figures that demonstrate Galileo’s prowess as a sire are his number of stakes winners (266 from his crops conceived in Ireland), his percentage of stakes winners (16.8%), the quality of his stakes winners (115.1 for those with a Timeform rating) plus the sheer quality of his top ten horses, who have an average Timeform rating of 132.3.

When you add in the fact that Galileo’s stamina index is 10.9 furlongs, you can easily understand why he and his descendants take some stopping at Epsom. He, of course, won the Derby and he sired his fourth Derby winner this year, with Anthony Van Dyck following New Approach, Ruler Of The World and Australia. He’s also had three Oaks winners. His Derby-winning son New Approach has sired a Derby winner (Masar) and Oaks winner (Talent), while two other sons Nathaniel (Enable) and Frankel (Anapurna) have had Oaks winners.

Galileo’s half-brother, Sea The Stars, has also chipped in with a Derby-Oaks double with Taghrooda and Harzand for good measure. Whilst there is no sign of Galileo slowing down to any perceptible degree, we are always on the lookout for a dominant son to take over. Both Teofilo and New Approach were first out of the blocks, but Frankel has already overhauled New Approach’s 35 stakes winners and it’s odds-on that he will also surpass Teofilo (currently on 70 stakes winners) in the next few years.

“Expect an upsurge from Frankel in the coming years”

If ever there was a racehorse that the bloodstock industry wanted to succeed at stud, it was Frankel. And he didn’t disappoint with his early runners. His first crop of two-year-olds made a big impression; at the end of his first year with runners, he already had six stakes winners on the board, which is the best total of any sire in the past 20 years and one that he currently shares with Oasis Dream and No Nay Never.

At the end of year two he was up to 20 stakes winners and well clear of any other sire at the same stage of their career. Dubawi had 18 by this stage and Frankel’s own sire, the great Galileo, had only nine. His phenomenal early pace continued through year three and by the end of 2018 he had sired 33 stakes winners, the same number that Dubawi had posted at the end of his third year. He is currently topping the table after year four, with 41 stakes winners. Moreover, Frankel’s prowess isn’t all down to his number of runners. His percentage of stakes winners at the end of each of his first three years were 12.5%, 15.6% and 15.9% – again the best of any sire in the modern era.

Frankel is currently sitting on 16.9% stakes winners, just ahead of his sire’s score. Although his 41 stakes winners (average Timeform rating of 114.3) are not quite as good as Galileo’s, they are as a group a very talented bunch, as very few sires can maintain an average rating of 114-plus for their stakes winners.

The task now facing Frankel is to find more championship horses just like Cracksman. So far, he’s had only one runner rated 125 or higher. By this point in his career Galileo had just sired his first Derby winner in New Approach, and Soldier Of Fortune, Teofilo and Sixties Icon had also surpassed the 125 mark. However, it’s odds-on that Frankel will get there as his crops of 2018 and 2019 – conceived on the back of his first crop success – are perhaps his best ever. So expect an upsurge from Frankel in the coming years. 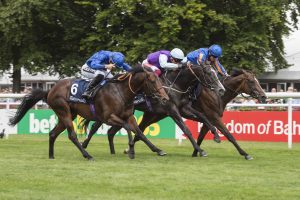 Up Next
Early signs are bright for Gleneagles