One of breeding’s most celebrated partnerships – that of the extraordinary Galileo with daughters of Danehill – now has no fewer than 266 foals of racing age and as many as 42 of them (an impressive 16%) have enjoyed stakes success. The nick’s most famous flagbearer, Frankel, continues to hog the headlines with his impressive total of ten Group winners from a first crop of around 110, while Highland Reel, Idaho, Deauville, Venice Beach and the promising Gustav Klimt continue to advertise the nick’s virtues on the racecourse. But spare a thought for Teofilo, the colt who set the ball rolling by becoming the champion two-year-old of 2006.

Teofilo could be credited with having provided the template which has provided Coolmore with so many notable winners by Galileo. With his dam Speirbhean being a Listed winner over a mile, with a sprinter as her sire, she brought plenty of pace to the partnership. This enabled Teofilo to show far more speed and precocity than Galileo had done, the bare facts being that he made a winning debut as early as July 8 and remained unbeaten in five starts, including the National and Dewhurst Stakes.

Teofilo was unable to continue his career as a three-year-old, leaving us unsure as to how far he would have stayed. There is enough evidence that Teofilo would certainly have stayed a mile and a quarter, and probably a mile and a half

Sadly, Teofilo was unable to continue his career as a three-year-old, leaving us unsure as to how far he would have stayed. There is now enough evidence concerning the Galileo-Danehill cross to be confident that Teofilo would certainly have stayed a mile and a quarter, and probably a mile and a half. This is supported by his record as a stallion, which features winners of the Irish Derby, Yorkshire Oaks, Prix du Cadran and the Irish St Leger. There’s also Permian, who went so close to landing the Grand Prix de Paris after his victories in the Dante Stakes and the King Edward VII Stakes. Tragically, this talented three-year-old was fatally injured in the Secretariat Stakes at Arlington in August.

Teofilo’s stallion career hasn’t all been about stamina, though. The durable Flight Risk won the Group 3 Ballycorus Stakes over seven furlongs as a six-year-old this year. Teofilo is scheduled to stand the 2017 Australian season at a fee of AUS$44,000, having resumed his shuttle career in 2016, This resumption reflected the successes of such as the New Zealand-bred Kermadec (now also part of Darley’s Australian stallion roster) and Palentino, both of whom were dual Group 1 winners over a mile as mature horses. However, the distinction of being Teofilo’s fastest and most precocious son arguably belongs to Havana Gold.

With better luck, Havana Gold would have matched Teofilo’s record of having won his first five starts as a juvenile. Unfortunately, his saddle slipped on his third start and Ryan Moore was unseated when the pair held a length lead with only 100 metres left to race in a Deauville Listed race. Victory went instead to the future Poule d’Essai des Poulains winner Style Vendome.

Havana Gold became a Listed winner over a mile less than a month later and then dropped back to seven furlongs to add a Group 3 success in the Somerville Tattersall Stakes. It was by only a head that he missed the £278,000 first prize in the Tattersalls Millions 2yo Trophy, so he was an admirable two-year-old, even if he was officially rated no higher than 110.

To his credit, he proved more durable than his sire, with the highlight of his second season coming when he accounted for the likes of Mondialiste and Style Vendome to take the Group 1 Prix Jean Prat over a mile.

Bearing in mind that Havana Gold was never asked to race over five furlongs and only once over six, I didn’t imagine him making a very fast start to his stallion career, which he began at a fee of £8,500 at Tweenhills Farm & Stud. Perhaps I would have come to a different conclusion had I factored in the racing record of Havana Gold’s dam Jessica’s Dream. This daughter of the very smart sprinter Desert Style had developed into a five-furlong specialist during the latter part of her career. She was fast enough to win two Group 3 races, including the Ballyogan Stakes and she also contested the Nunthorpe and the Prix de l’Abbaye.

This speed, coupled with Havana Gold’s 4 x 4 inbreeding to Danzig, via Danehill and Green Desert, appears to have played its part in Havana Gold’s fast start as a stallion. By early August he led the first-crop sire table, with ten individual winners of 13 races in Britain and Ireland. As many as nine of the ten had scored over five or six furlongs, with Havana Gold no doubt having also been helped by the presence among their broodmare sires of such as Dark Angel, Camacho, Acclamation, Exceed And Excel and Royal Applause. 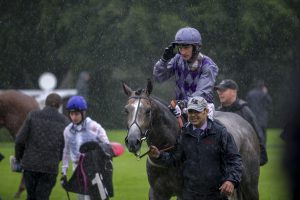 Havana Grey has shone this year for his sire Havana Gold, a son of Teofilo

The stars of the show have been Havana Grey, who was landing his third stakes success when he took the Molecomb Stakes, and Headway, a close second in the Coventry Stakes who found the soft ground against him in the Richmond Stakes.

It could be worth noting that Havana Grey is inbred 4 x 3 to Green Desert. Note too that the father, son and grandson team of Royal Applause, Acclamation and Dark Angel already have Havana Gold winners out of their daughters.

Fluctuating fee
Teofilo was one of the many stallions who experienced a significant fall in their fee over their first four seasons, from an initial €40,000 to €15,000. But then his first crop was represented in 2011 by four two-year-old stakes winners, headed by the Dewhurst Stakes winner Parish Hall, with their efforts restoring Teofilo’s fee to €25,000. With the likes of Trading Leather, Loch Garman, Havana Gold and Roz emerging among his second crop two-year-olds, Teofilo’s fee rose again, this time to €35,000. Then Irish Classic successes by Trading Leather and Voleuse de Coeurs in 2013 helped boost his fee to a new high of €50,000.

Teofilo’s current three-year-olds, such as Permian, Irishcorrespondent and Eziyra, are from that €35,000 crop, with his juveniles representing the €50,000 crop. By early August only ten of Teofilo’s 107 two-year-olds had made their racecourse debut, but the signs look encouraging.

The three winners are the French filly Tantheem, a decisive winner of the Group 3 Prix de Cabourg, Jim Bolger’s Theobald, who had followed up his winning debut with second place in the Group 3 Anglesey Stakes and Group 3 Tyros Stakes, and Mildenberger, a dual winner who filled third place behind Expert Eye in the Group 2 Vintage Stakes.

There will surely be more like them emerging through the autumn and it is fair to have high expectations of Teofilo’s next two crops, which were also sired at €50,000.

I was particularly interested that Tantheem and Mildenberger are both out of daughters of Dubawi. The process of a stallion establishing himself as a successful sire of broodmares can be lengthy, as it takes time for the daughters to produce enough foals to be able to compete with the established broodmare sires. I was asked in the summer whether it was true that Dubawi – at the age of 15 – had only just been represented by his first stakes winner in the role of broodmare sire, when Royal Julius won a Listed race at Nantes.

While this was true, the Group- and Listed-placed performers out of Dubawi’s daughters have reached double figures and now they have their first Group winner in the very promising Tantheem. I will be greatly surprised if there aren’t many more to follow, though it must be remembered that Dubawi’s rise to fame wasn’t without its setbacks. After two good-sized crops, his third numbered 78 foals and his fourth only 61, with his fee sinking to £15,000 in his fourth year. This may need to be taken into account in tracking his progress as a broodmare sire.

To return to Teofilo, his broodmare daughters are also off the mark, thanks to Afandem, winner of last year’s Group 3 Prix d’Arenberg, so this son of Galileo looks set to make his mark in several different roles over the next few years.

Up Next
Small breeders battle for top honours