Focus on winners in catalogues misguided

It’s that time of year when yearling sales catalogues arrive almost daily. As I look through them, I think of how much effort, thought and planning has gone into producing each horse to be healthy and looking at its best for its sales appearance. I also think about how little useful information is contained in the catalogue.

Those catalogues that carry copious details about the stallion’s performance are surely trying to blind potential buyers with the obvious.

If purchasers do not know everything there is to know about the performance of the sire and his most successful progeny, they need advice from someone who does. I find it hard to believe that this particular item of promotion or use of space on the page is necessary.

What the catalogues do confirm is that the culture of racing is all about winning. While the rewards from earning prize-money are spread farther down and are added to the totals, coming second is very rarely seen as anything but disappointing.

The pages in sales catalogues reference winners and, again, prize-money won, which becomes ever more irrelevant once inflation takes charge, and even more so when the changes in prize-money, especially in the bigger handicaps, is taken into consideration.

After all, this year’s new million-pound Ebor Handicap at York has bestowed on one horse far greater single-race earnings than any British Classic except for the Derby. As for breeders racing fillies, that all-important win, at whatever level, means having ticked a valuable box for the future. In both cases the individual horse is a ‘winner’ and everyone is happy.

The problem with this ‘a winner is a winner is a winner’ approach is that horses who scramble past the post in front with ratings in the 50s, 60s and 70s cannot possibly be compared with those higher up the scale, and in particular those attaining black type.

So, why do sales catalogues seem to perpetuate the obsession with winning rather than more sensibly using the ratings of the horses from whom we breed? Surely independent ratings should be regarded as a much better measure of racecourse performance and therefore suitability for breeding.

Ratings have been around for longer than most active breeders. Phil Bull began the Timeform scale in the 1940s and its methodology has been maintained to worldwide acclaim.

For a non-commercial approach, the International Classifications were introduced by Britain, Ireland and France in 1977 and have gradually been expanded to fit the original name.

Since the International Federation of Horseracing Authorities took over responsibility for the ratings in 2004, by which time most major jurisdictions had joined the Europe-led system, the scope has been extended to South Africa and South America.

Now known as the World’s Best Racehorse Rankings, they appear several times through the season before an end-of-season review wraps up a 12-month period.

The strength of the system is that it measures individual horses by ability, not on the often subjective basis of race reputation.

Of course, a potential sales purchaser can look up this information, but while I accept that the catalogue page is an information and promotional guide and conforms to each particular sales house’s norm, I think that more useful information could be provided.

As horses’ ratings are readily accessible, domestically as well as internationally, why not print the highest mark for each named individual and also show the best year-end figure for each of its racing seasons?

Add in the distance over which the highest rating was achieved, apply this to the whole page, and a picture of the whole family’s best racing distance and ability, or lack of it, soon begins to build up.

In some cases, there may be a number of very moderately-rated winners who disguise the failures in a family. We shouldn’t shy away from exposing them.

We live in the information age, where all manner of data is available at the push of a button or two, yet most sales catalogues look just the same as they did 50 years ago.

It is time to put the information that is relevant and available on the page, starting with the best rating of each horse and the distance at which that mark was achieved. 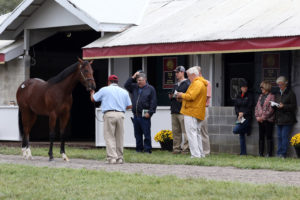 Up Next
Lots of excitement at Keeneland