The majority of Prince Khalid Abdullah’s stock can remarkably be traced back to those foundation mares that were sourced during the late 1970s and early 1980s to join his burgeoning Juddmonte Farms.

A collection of 47 individual families have thrown a Group 1 winner for the operation since Warning set the ball rolling back in 1988. Since then, a number of those lines have remained extremely prolific – this season’s leading two-year-old Siskin, for example, belongs to the ever successful Monroe clan, while barely does a month go by when families descending from the likes of Sookera, Mofida, Peace, Bahamian, Lost Virtue or Rockfest aren’t successfully represented in some shape or form at stakes level.

It is the Fleet Girl family, however, that has gifted Khalid Abdullah with the great Enable, undoubtedly the best filly or mare to carry those famous green and pink silks. With an unbroken series of ten victories behind her, the daughter of Nathaniel has become a real icon of British racing, as illustrated by the reception she received at Sandown Park on Saturday following her winning return in the Eclipse Stakes.

Not only that, the same family is also responsible for Headman, recently successful in the Group 2 Prix Eugene Adam at Saint-Cloud for Juddmonte and Roger Charlton.

Khalid Abdullah bought into this family in 1982 with the purchase of Ferrans Stud in Ireland, an acquisition that welcomed Enable’s fourth dam, Fleet Girl, into the Juddmonte fold. The daughter of Habitat had been a dual winner for her breeder, Dr Hubert Schnapka, winning on consecutive days at Tramore in 1978, and was quick to reward Juddmonte’s investment by throwing Bourbon Girl to Ile De Bourbon – foaled in 1984, she developed into one of the best fillies of 1987, running second to Unite in the Oaks and again to the same filly in the Irish equivalent.

It is the Fleet Girl family, however, that has gifted Khalid Abdullah with the great Enable

Today, there are 24 stakes-winning descendants of Fleet Girl, the majority of whom descend from Bourbon Girl.

Bourbon Girl was a relatively young 13-year-old when she died in 1997 but nevertheless, she left behind six winners led by the Grand Prix de Chantilly heroine Daring Miss (by Sadler’s Wells), Prix de Royaumont winner Apogee (by Shirley Heights) and Shining Bright (by Rainbow Quest), a minor winner but one talented enough in her light career to run fifth behind Intrepidity in the 1992 Oaks.

All the while, Apogee was forging her own reputation as a high-profile producer.

However, arguably the best of them was the 2002 Prix de Royallieu heroine and Prix de Diane runner-up Dance Routine, yet another from this family by Sadler’s Wells. And she in turn provided Juddmonte with a real star in Flintshire, a five-time Grade 1 winner and $9.5 million earner; the son of Dansili now stands at Hill ’n’ Dale Farm in Kentucky but will be represented by a smattering of first-crop yearlings at auction in Europe this sales season.

Headman, another grandson of Dance Routine, has a long way to go if he is to match Flintshire’s record but he has seemingly been long well regarded by the Charlton stable and was particularly impressive when running out the three-length winner of the Prix Eugene Adam on his most recent start. Juddmonte-bred top to bottom as a son of Kingman, himself a member of Juddmonte’s Bahamian family; he appeals as a Group 1 winner in waiting.

But for now, it’s all about Enable.

The mare is the fifth foal out of Concentric, who was trained by Andre Fabre to win three of her seven starts over 1m2f. Unraced at two, Concentric made rapid progress during the summer of her three-year-old campaign to strike in the Listed Prix Charles Laffitte before running second in the Prix de Flore.

One of the most striking aspects of Enable’s pedigree is that 3×2 inbreeding to Sadler’s Wells, which arises via Nathaniel, by Galileo, and Concentric herself.

In landing the Eclipse Stakes, Enable emulated her sire Nathaniel

One of the earliest examples of inbreeding to Sadler’s Wells came courtesy of Kamsin, the 2008 German Derby winner who was by Samum (dam by Old Vic) and out of a Winged Love mare. Closer to home, it later featured in the background of the 2011 Dewhurst Stakes winner Parish Hall, a member of Teofilo’s first crop who was the product of a Montjeu mare.

Since then, there have been a further ten Group 1 winners inbred to Sadler’s Wells in the northern hemisphere; Enable remains the star act but it is notable that the pattern also features in the background of two of this year’s leading three-year-old fillies in Anapurna and Channel, successful in the Epsom and French Oaks respectively.

In landing the Eclipse Stakes, Enable emulated her sire Nathaniel, a contemporary of Frankel who won the race on his four-year-old debut for John Gosden back in 2012.

Nathaniel was a top-class, well-bred performer who has been well supported by a network of leading breeders since his retirement to Newsells Park Stud. Even so, it remains very much to his credit that a filly of Enable’s class has emerged out of his first crop.

Last year’s Premio Lydia Tesio heroine God Given, a half-sister to Postponed, is also a member of that 120-strong first-crop, while his third is headed by the aforementioned Channel and Dashing Willoughby, the recent winner of the Queen’s Vase at Royal Ascot.

In all, Nathaniel has been represented by eight Group winners across Europe, six of whom are fillies. Enable also highlights a growing affinity with inbreeding back to Sadler’s Wells via Nathaniel, something that has been emphasised further this season via the aforementioned Channel and Dashing Willoughby.

Unsurprisingly, Concentric returned to Nathaniel last year after foaling a Sea The Stars colt. They are preceded by a juvenile Frankel filly, now named Portrush. In the meantime, there is surely more to come from her talented three-year-old filly Entitle, who fell only a neck short of Nausha in the Musidora Stakes in May. Deemed good enough by Gosden to later run in the Prix de Diane, it will be disappointing if that daughter of Dansili can’t add further to her family’s illustrious record in due course. 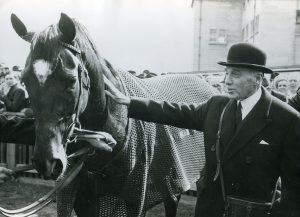 Up Next
Stakes were always high with Royal Palace in town