Alkumait another to pay tribute to Leigh influence
Exclusive Columns

The victory of Umm Kulthum in the recent Group 3 Firth Of Clyde Stakes at Ayr marked a significant day in the life of his sire Kodiac – one that has probably slipped by unnoticed. Renowned for his speedy two-year-olds, Kodiac became the most prolific sire of juvenile stakes winners at up to 6f since the Pattern began back in 1971, Umm Kulthum becoming his sire’s 28 juvenile sprint stakes winner. He also joined Exceed and Excel as the best source of five- and six-furlong Group-winning youngsters with 14.

Kodiac took over as the outright leader of stakes winners at Ayr, having joined his three-parts brother Invincible Spirit on 27 earlier this summer. The fact that Kodiac has run down his older sibling’s total despite Invincible Spirit’s four-year head start at stud just goes to show that he’s got the upper hand when it comes to getting classy sprint two-year-olds.

Moreover, it must also be recognised that Invincible Spirit has had better patronage down through the years than his younger brother. Kodiac’s propensity to sire fast, early and classy juveniles is his USP. Yes, he can get excellent sprinters, good milers and even the odd good middle-distance horse, but his sprint juveniles are the reason his yearlings sell so well. They have maintained a €100,000-plus average for the past three years, despite so many coming to sale each year.

It was perhaps Fairyland’s victory in the Group 1 Cheveley Park Stakes and Jash’s second in the Group 1 Middle Park two years ago that provided a watershed moment for their sire. It was these two excellent juveniles – plus ten other stakes winners, including Group 1-winning sprinter Hello Youmzain, Group 2 winners Kessaar and Fox Champion, plus three more Group 3 winners from his 2016 crop, produced from significantly better mares, that showed what he is truly capable of when he covers significant numbers of quality mares. 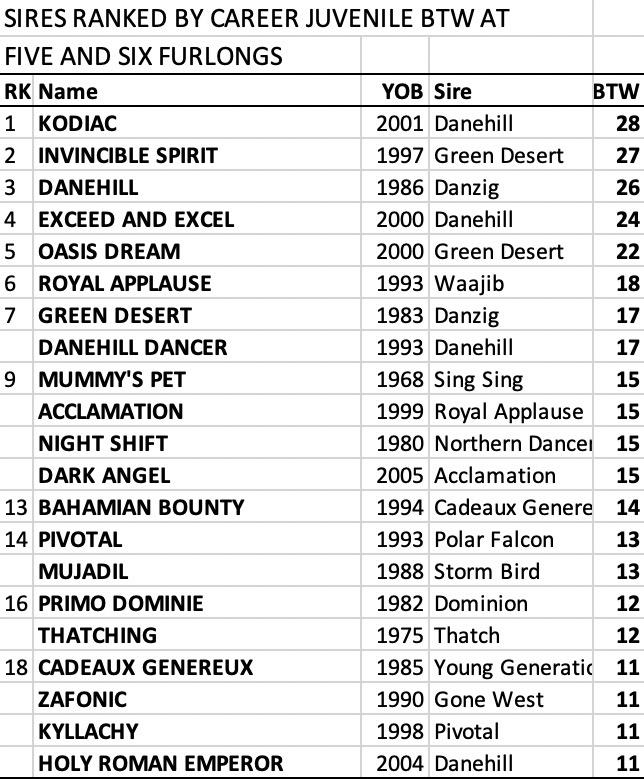 Perversely, his current three-year-old crop, produced from a fee of €45,000, his highest to that point in his career, has yet to yield a single stakes winner and contains only two Group 3-placed horses to date. Interestingly, the number of elite mares he served that year was considerably lower than in 2015. But he got back on track this year through his Royal Ascot scorers Campanelle, who joined the ranks of Group 1 winners when adding the Prix Morny to her earlier Group 2 Queen Mary success, and Nando Parrado, who won the Group 2 Coventry Stakes and then followed his paternal half-sister home in the Morny. Since then his Irish-trained daughter Frenetic has put up some good performances and Ubettabelieveit became his third juvenile Group winner of the year, winning the Group 2 Flying Childers Stakes at Doncaster.

Everyone knows that Kodiac is good at what he does best, but a stallion that was constrained because of his comparatively limited opportunities. After all, his eight previous crops have yielded only two Group 1 winners, including a previous Cheveley Park heroine in Tiggy Wiggy. The question now is: do we need to readjust our opinion of Kodiac?

The son of Danehill has always been commercial with many of his sales yearlings providing an excellent return on a low covering fee. His stallion reputation has been built the hard way. For a start, it was very brave to retire a Group 3-placed 112-rated horse, even if his older brother had made a good start with his first two-year-olds. Moreover, it has taken Kodiac nine years to attract good numbers of high-class mares. But now that he has, he’ll have to stand a higher degree of scrutiny.

So far, he has sired 5.4% stakes winners to runners, compared to his brother’s 8.4%. Significantly, Kodiac’s rate of success used to be well in advance of what his mares achieved with other sires, but now it’s just on a par, given his increased opportunities. It’s also noteworthy that when he gets a good mare, his percentage of stakes winners goes up to 8%. So it’s not unreasonable to expect a number closer to his brother’s 12% stakes winners from good mares from his future crops.

When Invincible Spirit’s fee rose from €10,000 to €35,000 in year five, the resultant juveniles only included two Group performers – Cheveley Park winner Hooray and Group 2 scorer Zebedee – so Kodiac has already gone well beyond that with his first crop produced at a significant fee. And there are more sizeable quality crops in the pipeline – his next two sets of two-year-olds come from his two strongest-ever books of mares. It is unusual to see a stallion still showing such promise as he enters the twilight of his career. 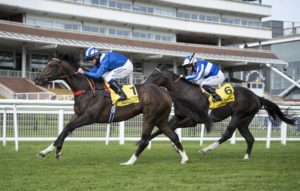 Up Next
Alkumait another to pay tribute to Leigh influence