Father and son’s deep impact on respective eras in Japan

A closer look at Sunday Silence and his son, Deep Impact, and their stud careers

The death of Japan’s great sire Deep Impact at the relatively young age of 17 is a crushing blow for both local and international breeders. That’s not in doubt. Neither is the fact that Japan may find it very difficult for find another so dominant. It’s almost 30 years since his equally brilliant sire, Sunday Silence, was cast off to Japan from his native America.

The near-black son of Halo suffered his first rejection as a yearling at the Keeneland July Sale in 1987, where he failed to sell at only $17,000. His second snub came the following spring when he again failed to find a new home as a two-year-old in training in California. Whatever it was that put potential buyers off certainly didn’t stop him reaching racing’s pinnacle. But for a defeat at the hands of Easy Goer in the Belmont Stakes in 1989, we would have witnessed the first Triple Crown winner to have gone on to land the Breeders’ Cup Classic, a feat that would take another quarter of a century to achieve through American Pharaoh.

Sunday Silence’s final humiliation came at the end of his racing career. His poor conformation evidently precluded a stallion career at Stone Farm, where his sire Halo had stood. But America’s loss was Japan’s gain. Before his death in 2002, Sunday Silence had amassed 169 stakes winners which amounts to 13.7% of his runners. Considering that the ratio of black-type racing in Japan is very low compared to other countries, 13.7% stakes winners to runners is a truly world-class achievement. Moreover, when we look at what Sunday Silence’s best son, Deep Impact, has managed we can truly appreciate his sire’s numbers. So far, Deep Impact has sired 136 stakes winners, which puts him on 10.5% stakes winners to runners, again a top-class score.

Due to a dearth of black-type chances in Japan, local professionals put a huge amount of store in a stallion’s ability to get winners of open races. Using this metric, we can again see how these two giants have dominated their respective eras. Sunday Silence produced open winners at a rate of 33.1%, compared to his son’s 21.9%.

But the real test of a sire’s prowess is his ability to produce better runners from his mares than all other sires. And Deep Impact has done that in a decisive manner: his 10.5% stakes winners are from mares that usually produce 7.6%. Sunday Silence, meanwhile, produced his 13.7% stakes winners from mares whose normal output was only 5.6%. So, it is clear that Deep Impact has had the benefit of better mares than his sire, even if it is equally true that he’s been denied access to all the good mares carrying Sunday Silence blood. He has also reaped the rewards of Shadai’s policy of acquiring top international mares, more so than his sire.

Like most sires, both have done very well with elite mares, which have produced only a third of Sunday Silence’s runners and half of those by Deep Impact. The Sunday Silences from elite mares include 17.4% stakes winners to runners, while those by the Japanese Triple Crown winner have posted an excellent 13.6%.

Another interesting comparison between father and son is the quality of their very best racehorses. Sunday Silence’s best ten runners – headed by Deep Impact of course – have an average rating of 127.6, compared to his son’s 126.4. Both have had a similar number of runners, but Sunday Silence sired 12 crops, while Deep Impact’s current two-year- olds are from his tenth crop. Therefore, we can expect Deep Impact to at least close the gap, if not overtake his illustrious sire.

Deep Impact’s demise is of course also a significant loss for the world’s best breeders. Both Coolmore and Godolphin, among others, have been using him in recent years. His stock’s success in Europe has been there for all to see. So far, he’s had 13 stakes winners, including Saxon Warrior, from 42 runners – an outstanding strike-rate of 31%. Even more impressive is the 50% stakes winners to runners from his European-foaled runners, headed by Group 1 winners Study Of Man and Beauty Parlour. One thing is certain, there will be many more European Stakes winners from his last four crops.

Despite his dominance, Deep Impact hasn’t yet found a worthy stallion heir, but there are simply far too many good colts in the pipeline to believe that he won’t find a good sire son or two. Whether they’re as good as their sire or grandsire is a different matter entirely. 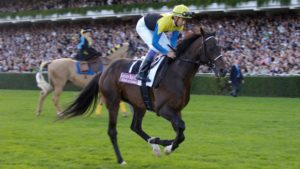 Up Next
Deep Impact well placed to leave European legacy