European breakthrough on the cards for Uncle Mo

For most of the five furlongs of the Norfolk Stakes at Royal Ascot in June, it looked as though Golden Pal was going to provide his sire Uncle Mo with his first black-type success in Britain, and indeed in Europe. Instead Golden Pal was caught in the final stride and beaten a neck by The Lir Jet, with Lipizzaner, another son of Uncle Mo, finishing fourth after dwelling at the start.

Bearing in mind that Uncle Mo is now 12-year-old, one could be forgiven for wondering why the Kentucky-based stallion is taking so long to reach that significant European milestone. Part of the explanation is that he has been studiously ignored by most European owners and breeders, no doubt on the basis that he was a dirt specialist sired by another dirt specialist in Indian Charlie. As a result, the Ashford Stud resident’s representation in Europe’s major racing countries amounts to only eight runners in Britain, two in Ireland and two in France.

In addition to Golden Pal, he has done well with the useful miler Corrosive, who sold for 450,000gns after winning four times in Britain, and maybe the tide is ready to turn. In early September his French-trained three-year-old daughter Family Way won on her second start and Aidan O’Brien’s Lipizzaner returned from a lay-off to defeat the Group-placed Coulthard over five furlongs at Navan.

Despite the omission of a European black-type winner, Uncle Mo is undoubtedly an extremely talented stallion, as the 2020 season in North America is constantly underlining. Here we have yet another example of success breeding further success four or five years down the line.

When Uncle Mo’s first crop raced in 2015, he totally dominated the first-crop sires’ competition, with the champion colt Nyquist and the Grade 1-winning filly Gomo leading the seven black-type winners among his team of 28 individual scorers. Time was to show that this was only the tip of the iceberg for this remarkable first crop, with its total of black-type winners surging to 25 from a total of 157 named foals.

With Nyquist adding the Florida Derby and Kentucky Derby to his three juvenile Grade 1 successes, and Outwork taking the Grade 1 Wood Memorial Stakes, the momentum built through the early months of 2016, guaranteeing Uncle Mo a huge book of mares at an increased fee of $75,000 (up from only $25,000 in 2015).

LIPIZZANER wins the @IrishEBF_ Race for @Ballydoyle with Seamie Heffernan aboard 👏 pic.twitter.com/xZMPPi3dbZ

He was America’s busiest stallion, covering 256 mares for a crop of 207 live foals, and once again the black-type winners have been flowing with impressive regularity. When Bye Bye Melvin and Yaupon scored a Graded stakes double in the Grade 2 Amsterdam Stakes and the Grade 3 Saranac Stakes at Saratoga on August 29, they respectively became the eighth and ninth Graded stakes winners from a crop which also includes the triple two-year-old Grade 1 winner Bast.

All of which acts as an appetiser for Uncle Mo’s 157-strong 2018 crop. After the Grade 1 successes of Nyquist, Outwork and Gomo, Uncle Mo’s fee for 2017 was doubled to $150,000, and Uncle Mo is already beginning to repay the breeders who supported him at this high price. In addition to the previously mentioned Golden Pal, who won the Skidmore Stakes on turf at Saratoga, Girl Daddy justified her status as a Thoroughbred Daily News Rising Star with her decisive victory in the Grade 3 Pocahontas Stakes on her second start, booking a ticket to the Breeders’ Cup. Uncle Mo’s subsequent crops have been sired at $125,000.

If these higher fees result in a further improvement in his results – as they so often do – Uncle Mo, with his largely outcross pedigree, will prove a true asset to American breeders. Perhaps Europeans will also have to give him a shot, bearing in mind that Bye Bye Melvin, Carressa, Enola Gay and Mo Forza have all won Graded stakes on turf this year.

Uncle Mo is also making some successful first steps in his bid to become a sire of sires. Several of his Graded stakes-winning sons entered stud in 2017 and three of them have already been represented by their first black-type winners.

Predictably, it’s the Kentucky Derby-winning Nyqist who is leading the way. This Darley Kentucky stallion has already been represented by Gretzky The Great, a winner of two of his three starts including the Soaring Free Stakes on turf, and the impressive filly Vequist, who stormed home nearly ten lengths clear in the Grade 1 Spinaway Stakes, with Lady Lilly, another of Nyquist’s daughters, in third place.

Next comes the WinStar Farm-based Outwork, whose daughter Samborella won the Seeking The Ante Stakes at Saratoga on her second start before suffering a fatal injury. Then there’s the New York-based Laoban, who is responsible for the Grade 2-placed Ava’s Grace and the black-type winner Simply Ravishing. 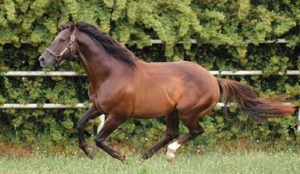 Up Next
Rollercoaster Daredevil story reflective of today's harsh market