Echoes of the past as Palace Pier surges to Marois victory

There was a sense of deja vu as Palace Pier powered past Alpine Star in Sunday’s Prix Jacques les Marois.

Six years ago, the race was all about Kingman, then in the midst of an outstanding three-year-old campaign for John Gosden. Kingman had been electrifying on a sound surface in the St. James’s Palace and Sussex Stakes when able to utilise his powerful change of gear to good effect. Yet he had also been very impressive when taking the Irish 2,000 Guineas on bad ground and so when the rain came at Deauville ahead of the Marois, hopes remained that it wouldn’t conspire against him and he duly obliged under James Doyle, storming clear to win easily from Anodin.

The rain came again last weekend, as it is wont to do in Deauville, and by the time they lined up for the Marois, the race was doomed to be once again a heavy ground affair. Like his sire before him, Palace Pier was sent off favourite, his price in response to an authoritative win in the St. James’s Palace Stakes at Royal Ascot. Yet unlike Kingman, the son had never encountered such soft conditions before; his ability to adapt would have to be taken on trust. 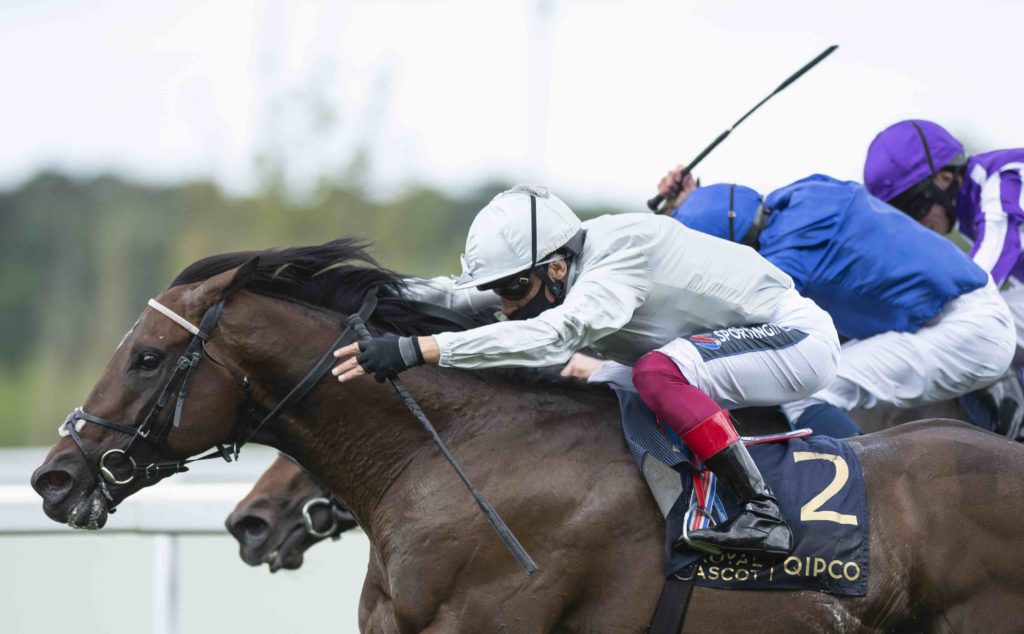 It would be stretching it to suggest that Palace Pier relished the ground but he coped with it well enough, taking closer order as Frankie Dettori nursed him into the race before getting the better of a dour Alpine Star to win with something in hand.

Alpine Star ran a brave race in second for the Niarchos family, falling only three-quarters of a length short of emulating her third dam Miesque, who won this race in 1987 and 1988, half-sister Alpha Centauri (2018) and relation East Of The Moon (1994).

Palace Pier is the latest masterpiece for Juddmonte’s Kingman, for whom a brilliant weekend also consisted of a win by fellow three-year-old Domestic Spending in the $500,000 Saratoga Derby Invitational at Saratoga. The gelding is one of a clutch of Tattersalls purchases made in recent years by agent Mike Ryan on behalf of Seth Klarman’s Klaravich Stables and trainer Chad Brown. In what has been an extraordinarily successful move, those early forays into the Tattersalls market has also yielded champion Newspaperofrecord, Group 2 winner Digital Age and Grade 3 winner Demarchelier, now a stallion at Claiborne Farm in Kentucky.

Moreover, in addition to Domestic Spending, Brown’s armoury for Klaravich also includes another potentially top-class Kingman in Public Spending, a colt bred by Fergus Anstock’s The Kathryn Stud who made an impressive winning debut on the Saratoga Derby undercard. Saratoga maidens are notoriously competitive and in trouncing a field of well-regarded youngsters, Public Spending has already entered calculations for the Breeders’ Cup Juvenile Turf.

The Kingman juvenile bandwagon was also in motion closer to home courtesy of another impressive debutant in Gosden’s Magellan, the easy winner of his assignment at Newmarket.

Arguably Kingman’s greatest asset was his turn of foot and it is this weapon that is now separating a lot of his better runners away from the pack. 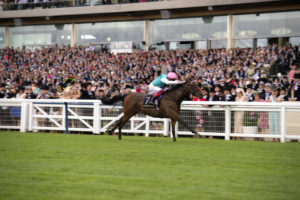 A great example was the stallion’s very first runner, Calyx, who got Kingman off to a flyer when successful on debut at Newmarket prior to taking the Coventry Stakes at Royal Ascot.

Although he never went on to win a Group 1, Calyx was undoubtedly of that calibre and most likely would have done had soundness issues not intervened. Diane Wildenstein’s homebred Persian King had better luck, becoming an early Group 1 winner for Kingman in the 2019 Poule d’Essai des Poulains and following up in this year’s Prix d’Ispahan. The likes of Headman and Sangarius, both of whom followed Calyx’s example by rewarding the support of Juddmonte, later added to the lustre of a first crop that currently contains 13 stakes winners.

Palace Pier, the current star of nine stakes winners within Kingman’s second crop, was bred out of the Nayef mare Beach Frolic by Highclere Stud and Floors Farming but he maintains the good association between his sire’s progeny and Gosden that was set in motion early on through Calyx, Private Secretary and the mercurial King Of Comedy. The colt is Kingman’s second Group 1 winner – though it’s fair to say that Domestic Spending turned in a Grade 1 performance when winning Saturday’s ungraded Saratoga Derby – and again underlines his ability as a source of milers; the better ones are invariably strong travellers and it’s notable how of his 22 stakes winners, 14 secured their best win at around a mile or under. It is also worth acknowledging that of those 22 stakes winners, 15 are colts; his most accomplished fillies to date are the Group 3 winners Summer Romance and Nausha.

Few stallions have recently caught the imagination so vigorously as Kingman. The son of Invincible Spirit covered no fewer than 255 mares last season at a fee of £75,000 and another 179 this year at £150,000. Meanwhile, his yearling sales average has justifiably increased year-on-year to a high of 316,390gns in 2019. Two of his yearlings surpassed the million guinea mark last year led by Symbolic Power, a 2.3 million guineas purchase by Godolphin who was third on debut for Charlie Appleby at Sandown earlier this month.

At 600,000gns, Palace Pier was the joint fourth most expensive Kingman yearling to sell in 2018. They’re a classy bunch. The leader was Cormorant, a 1,050,000gns Tattersalls October Book 1 purchase by M V Magnier who won this year’s Leopardstown Derby Trial. The smart dual winner King Leonidas, another trained by Gosden, topped Book 2 of the Tattersalls October Sale at 750,000gns while his stable-mate Waldkonig, the Listed-placed half-brother to Waldgeist, was knocked down for 600,000gns at Book 1. 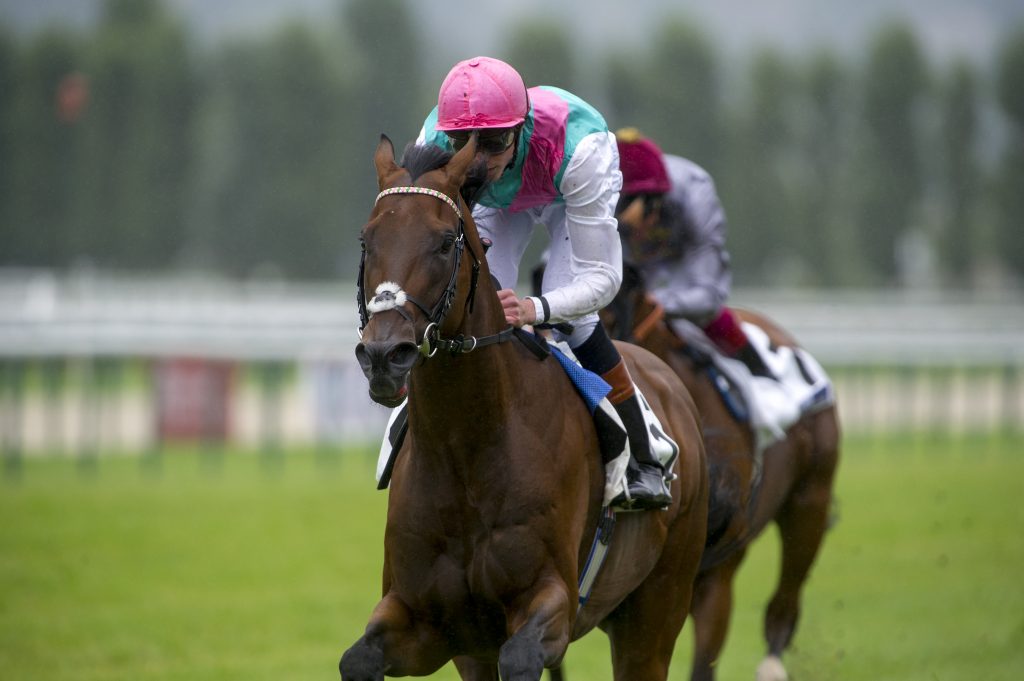 Palace Pier’s Marois victory saw him emulate his relation Miss Satamixa, who landed the 1995 renewal at the expense of British raider Sayyedati for Jean-Luc Lagardere and trainer Andre Fabre.

Lagardere was in the process of cultivating the stud career of his top miler Linamix at the time and in Miss Satin, a daughter of Satingo bred by Lagardere out of the stakes-winning miler Miss Skyscraper, he found a good ally.

Miss Satamixa, from the first crop of Linamix, turned out to be the best of the mare’s seven winners but they also came to include the Group 3-placed Mrs Annie (by Bolkonski), subsequently the third dam of 1,000 Guineas and Irish Oaks heroine Blue Bunting, and French Listed winner Miss d’Ouilly (by Bikala), the third dam of Palace Pier.

John Warren purchased Miss d’Ouilly for 50,000gns as a 13-year-old at the 2000 Tattersalls December Sale. She was already a proven stakes producer as the dam of American Grade 3 winner Miss Caerleona and within several years, that daughter had added her own chapter to the family as the dam of Grade 2 scorer Miss Coronado and Nell Gwyn Stakes heroine Karen’s Caper.

Highclere Stud and Floors Farming have developed this family since then, notably via her Night Shift daughter Night Frolic, who sprang to prominence as the dam of the Musidora Stakes winner Joviality and Dante Stakes winner Bonfire in successive years. Another daughter, the stakes-placed Singspiel mare Demisemiquaver, has produced Godolphin’s classy stayer Rare Rhythm.

Beach Frolic, her 2011 filly by Nayef, never ran. However, she evidently produces good-looking stock; in addition to Palace Pier, her auction results include 600,000gns for the winning Tatweej (by Invincible Spirit) and 300,000gns for last year’s yearling colt by Camelot, now named Tiger Beetle and with Sir Michael Stoute.

Those lofty figures were achieved before Palace Pier, the mare’s third foal, had even had a sniff of black-type, so it will be very interesting to see the level of demand for her youngstock now in the pipeline, namely a yearling colt from the first crop of Highland Reel and a colt foal by Almanzor. 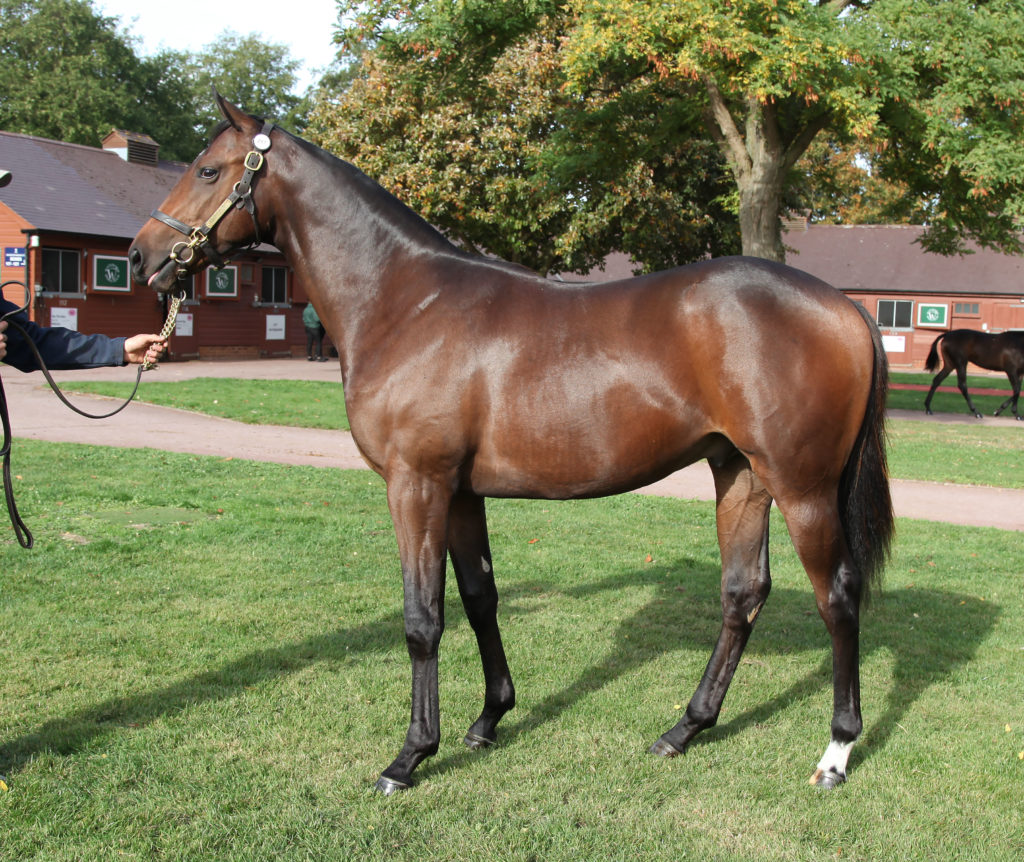 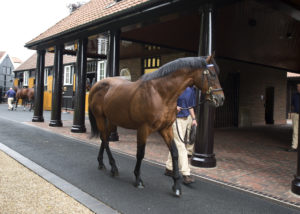 Up Next
Sunbittern a key to Dubawi