Early signs point to Frankel excelling as a broodmare sire

June and July could hardly have been more enjoyable for Frankel’s legions of fans. In addition to siring winners of the Derby, Irish Derby, Grand Prix de Paris and King George VI and Queen Elizabeth Stakes, the superstar son of Galileo was leading sire at Royal Ascot. His worldwide total of 2021 Group 1 winners currently stands at five with his imposing daughter Snow Lantern taking the Falmouth Stakes. He now has 17 Group 1 winners and a total of 52 Group/Graded winners from his first five years at stud. There should be more to come from his large sixth crop, now two-years-old.

Snow Lantern was one of three winners for Frankel on July 9, along with the Queen’s tough filly Light Refrain, who landed the Group 3 William Hill Summer Stakes over six furlongs. However, that wasn’t the full extent of Frankel’s impact on July 9. He also cropped up as the broodmare sire of Noble Truth, the Kingman colt who won the Weatherbys Bloodstock Pro British EBF Maiden Stakes in a manner which suggested he may one day justify his €1.1 million price-tag. His trainer Charlie Appleby, who has used this race to launch several future stakes winners, has high hopes for Noble Truth. Provided the colt continues to overcome his headstrong tendencies, he could be a candidate for the Group 2 Champagne Stakes or Group 1 Vertem Futurity.

Noble Truth was one of only seven runners up to that point for Frankel in his fledgling role as broodmare sire. Needless to say, Frankel’s pedigree gives rise to great expectations of him in this role. His sire Galileo appears to be well on his way to his second broodmare sire championship and there must be every chance that Galileo will eventually go close to matching the seven-year sequence of championships achieved by his own sire Sadler’s Wells. And don’t forget that Frankel’s own broodmare sire Danehill topped the broodmare sire table on three occasions.

The early signs are certainly encouraging. Four of the seven runners out of Frankel mares have won as two-year-olds in 2021 and another has been Listed-placed in Australia. In addition to Noble Truth, the winners include the potentially very useful Dark Angel filly Juncture, the talented Kingman colt Tolstoy, who has twice tackled Group 2 company, and the Starspangledbanner filly Little Miss Dynamo, a smooth winner of a six- furlong novice race at Ripon. Like Noble Truth, Juncture holds a Group 1 entry and this may not be too far-fetched for the Juddmonte homebred, as this impressive Leopardstown winner went on to run second in the Group 3 Silver Flash Stakes.

An interesting aspect of these first seven runners out of Frankel mares is that none of their dams won a race. Indeed, six of them never made it to the racecourse and the seventh, Omneeya, had a Timeform rating no higher than 70. Needless to say, this doesn’t tell the whole story. Noble Truth’s dam Speralita was sold for €450,000 as a yearling in 2015, her price reflecting the fact that she was a half-sister to the excellent Stacelita, whose tally of six Group 1 victories featured the Prix de Diane and the Prix Vermeille. What wasn’t apparent in 2015 was that Soul Stirring, Stacelita’s filly from Frankel’s first crop, would develop into a champion in Japan, where her Group 1 successes included the Yushun Himba, the equivalent of the Oaks.

Juncture’s dam Occurrence also had plenty to recommend her. Her dam Arrive had the distinction of being a sister to the extraordinary broodmare Hasili, and Arrive herself was named Britain’s broodmare of the year in 2008 as the dam of smart fillies Promising Lead and Visit. Visit was easily the more precocious of these two, as she showed in winning the Group 3 Princess Margaret Stakes in the July of her first season.

There were also high hopes that Occurrence would help Frankel make a fast start. She proved herself a lovely mover in her early work on the Beckhampton gallops, arguably attracting more attention than Fair Eva, who was to become Frankel’s first Group winner when she easily landed the Princess Margaret Stakes. By then, though, Occurrence’s career was over, following a life-threatening injury to a pastern. Tolstoy’s dam War And Peace was another with a good excuse for not making it to the racecourse, but this daughter of the Group 1-winning Emulous had plenty to recommend her as a broodmare for Sir Robert Ogden.

As might be expected, many of Frankel’s daughters are being sent to high-priced proven stallions. Occurrence has a yearling by Siyouni and is now in foal to Oasis Dream, sire of her Group- winning half-sister Visit. Siyouni has been a popular choice for other daughters of Frankel, part of his attraction being that he has comparatively little Northern Dancer blood, with no Sadler’s Wells. He does though create 3 x 4 to Danehill. He has at least seven youngsters with dams by Frankel, including a 2021 colt out of the Listed-winning stayer Aljezeera, a 2021 filly out of Ghalyah, herself a €1,150,000 yearling from the excellent Platonic family, and a two-year-old filly, Au Chocolat, out of Ambrosia, a three- parts-sister to Galileo’s triple Group 1 winner Decorated Knight.

Tolstoy’s dam War And Peace has a 2020 filly by No Nay Never named Balalaika, plus a 2021 filly by Lope De Vega. No Nay Never also has a 2021 filly out of Frankel’s fast and precocious daughter Queen Kindly, winner of the Group 2 Lowther Stakes. Lope De Vega was also selected as the mate for another of Frankel’s best daughters, siring the 2021 filly out of Oaks winner Anapurna. The Lope De Vega/Frankel partnership is also represented by a yearling filly out of the high-priced Ghalyah and a filly foal out of You Alone, a half-sister to Shamardal’s smart son Shaman, from the family of Intello. 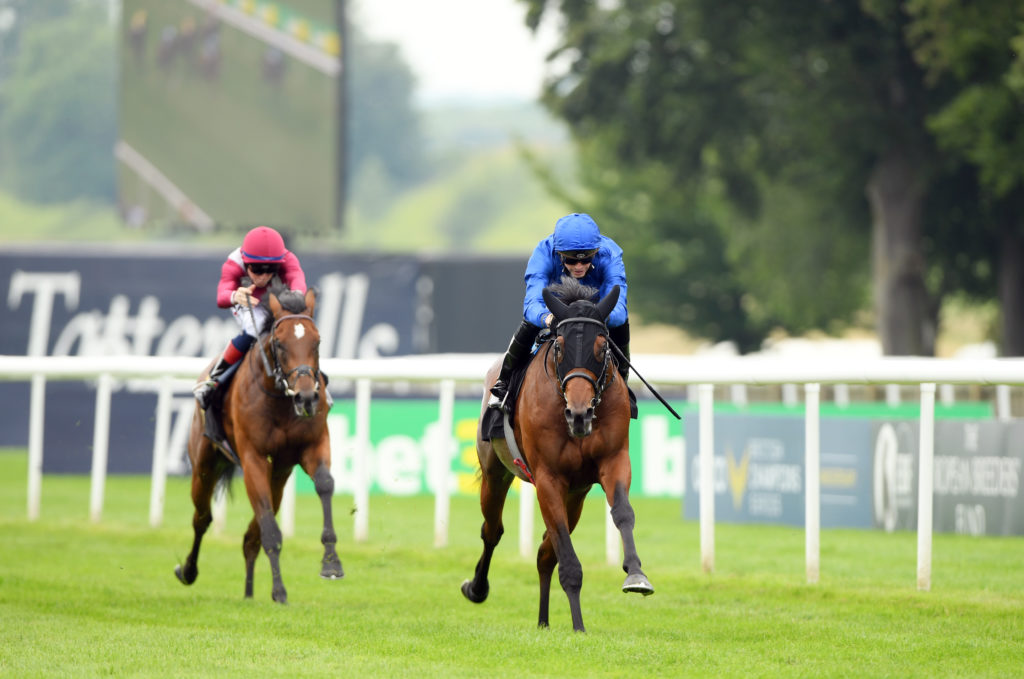 Kingman, whose association with Frankel mares has started brightly with Noble Truth and Tolstoy, has some other well-connected youngsters in the pipeline, including a 2020 filly out of Lady Frankel. This half-sister to Lope De Vega was a Group-winning miler with smart form at Group 1 level.

Naturally Juddmonte has entrusted some above-average daughters of Frankel to Kingman and has a 2021 colt out of Fount, a Group 3-winning daughter of the high-class American performer Ventura. There’s also a 2021 filly out of Icespire, a half-sister to Special Duty and to the dam of Expert Eye.

Fount’s 2021 mate was No Nay Never, who isn’t the only son of Scat Daddy being entrusted with daughters of Frankel. The Triple Crown-winning Justify has three daughters out of them, including two out of Rubilinda, a very useful turf winner over six furlongs and a mile. Rubilinda is Frankel’s best winner out of an Invincible Spirit mare. Of course, Invincible Spirit also sired Kingman, whose bright start with Frankel mares is detailed above, and Invincible Spirit himself has several youngsters out of Frankel’s daughters, including a 2020 filly out of Icespire.

At this early stage it looks as though Juddmonte considers Dubawi to be arguably the prime option for Frankel’s daughters. We have already seen Frankel excel with Dubawi mares, notable siring the Derby and King George hero Adayar and his fellow Group 1 winner Dream Castle, so there is good reason for hoping that the reverse cross – Dubawi on Frankel mares – will prove similarly productive.

Juddmonte already has a 2020 filly and a 2021 colt out of Mori, a Listed-winning daughter of the excellent Midday, as well as 2021 colts out of Obligate, a Group 2-winning miler, and Sun Maiden, a Group-winning half-sister to Midday. The Juddmonte mares which visited Dubawi this year included the Group 1 Fillies’ Mile winner Quadrilateral, the Listed-winning Franconia and the talented Portrush, a three-parts-sister to the great Enable.

The combination of Sea The Stars and Frankel’s daughters creates 2 x 4 inbreeding to that exceptional racemare and producer Urban Sea. Masar, the 2018 Derby winner, is another inbred to Urban Sea (3 x 4 in his instance) and he too has a pedigree which combines Galileo and Cape Cross, the stallions responsible for Frankel and Sea The Stars. It will be interesting to see whether Sea The Stars’ youngsters possess nearly as much talent as Masar. They include a 2021 colt out of Lady Livonia, an unraced sister to Lady Frankel and half-sister to Lope De Vega, and a 2021 filly out of the Musidora Stakes second Frankellina.

Frankel’s success this year with the likes of Snow Lantern, Light Refrain and Mehnah is a reminder that he can sire horses which shine at up to a mile. An earlier example was Lightening Quick, who landed the Group 3 Athasi Stakes over seven furlongs. Speed should therefore be the forte of this mare’s yearling filly and colt foal by the top Australian sprinter Zoustar.

The groundwork has clearly already been done for Frankel to build an impressive career as a broodmare sire, but it is worth adding that progress in this area can be slow for any young stallion. It is usually only when a stallion’s broodmare numbers start to grow exponentially that he stands a chance of competing on level terms and this may take Frankel a little while, as his second, third and fourth crops were each smaller than its predecessor. It is only now that his fifth and largest crop is three years old that – at least temporarily – he has been able to displace his sire Galileo from his customary position at the top of the general sires’ table.

The next few years will also start to tell us whether Frankel has inherited Galileo’s ability as a sire of sires. The first of his Group 1-winning sons to face the racecourse test will be Cracksman, who has around 100 yearlings in his first crop. It’s interesting to think that – just as Frankel defeated Nathaniel on his debut at Newmarket – Cracksman had the redoubtable Stradivarius back in fourth when he too made a winning debut as a juvenile. Next in line is Without Parole, Frankel’s St James’s Palace Stakes winner, who was well received in his first season at Newsells Park Stud. 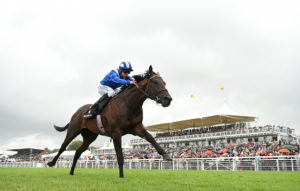