Dubawi dominance a feature of autumn

The indomitable Galileo may have taken the lion’s share of the honours on Arc day, with his unprecedented 1-2-3 in the Arc, but arch-rival Dubawi made sure that he wasn’t overshadowed throughout the autumn.

The Arc weekend came just days after the Goffs Orby/Wildenstein dispersal, where Dubawi’s colt out of the Classic-winning Beauty Parlour became the only yearling to make seven figures, at €1,400,000. Then at Tattersalls October Book 1, two Dubawi colts – out of the Group 1 winners Fallen For You and Zee Zee Top – became the world’s joint-highest-priced yearlings of 2016 when selling for 2,600,000gns.

Team Dubawi was also in very fine form on the racecourse. His progressive son Move Up, fresh from a Group 2 victory in Turkey, proved too strong for some smart older horses in the Group 3 Cumberland Lodge Stakes on October 1. The following day saw Dubawi reach a surprising landmark – one you could be forgiven for thinking he’d passed long ago – when his daughter Wuheida became his first two-year-old Group 1 winner.

The style of her victory in the Prix Marcel Boussac suggests she has the potential to follow in the footsteps of several recent winners of the race, such as Divine Proportions, Finsceal Beo, Zarkava, Misty For Me, Elusive Kate and Found. 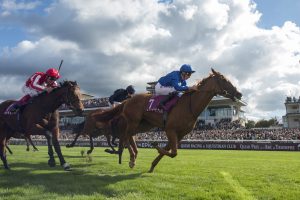 Wuheida is out of a Singspiel mare, and so is So Mi Dar, who started a hot favourite for the Group 1 Prix de l’Opera two races later. Unfortunately for her supporters, So Mi Dar was short of room at a crucial stage and in the circumstances did well to close to within half a length of Speedy Boarding and Pleascach.

Had So Mi Dar managed to win the Opera – and she might well have done with a clearer run – she would have completed a remarkable treble for the Dubawi-Singspiel partnership, as this nick is also responsible for Left Hand, winner of the Group 1 Prix Vermeille three weeks before the Arc.

Dubawi’s statistics with Singspiel mares now stand at 21 foals, of which 17 have started, 11 have won and five – a tremendous 24% – have become black-type winners. In addition to Wuheida, Left Hand and So Mi Dar, they include Majestic Dubawi, a Group 3 two-year-old winner, Laugh Aloud, a 2016 Newmarket Listed winner, and Nolohay, who was Group 2-placed in France.

For good measure, Dubawi sired the Group 2 Derby Italiano winner Worthadd, the Listed winner Best Of Times, the Poule d’Essai des Poulains runner-up Havane Smoker, the Group 2 Royal Lodge Stakes second Muntazah and the Listed-placed Algaith from only nine foals out of mares by Singspiel’s half-brother Rahy. That adds up to 11 black-type horses from 30 foals out of daughters of these two high-class sons of the champion racemare Glorious Song.

I should add that Glorious Song wasn’t just a champion in Canada and the US, where she won half of her 34 starts. She was also a sister to Devil’s Bag, America’s champion two-year-old of 1983, and to Saint Ballado, America’s champion sire of 2005, so her bloodlines certainly packed a punch.

When trying to establish why a particular nick works so well, I think people often underestimate the relevance of location. For example, the famous Nasrullah-Princequillo nick involved two stallions based at the same farm (Claiborne) and so do Galileo’s partnerships with Danehill and Danehill Dancer. Needless to say, Singspiel was based at Dalham Hall, where Dubawi has also spent most of his career.

Of course it isn’t as simple as that. In a successful nick you usually find that the two stallions complement each other physically and the chances are that their bloodlines also blend very well. It is worth adding that, in the bloodstock world, price is a powerful indicator of class. Singspiel, as a prolific international Group/Grade 1 winner out of a champion racemare, spent most of his stallion career at fees ranging from £20,000 to £50,000 (possibly more in 2005, when he was listed as private).

It has been a similar story with Dubawi, whose early successes resulted in his fee soaring to £75,000 in 2012 and 2013, when the likes of Left Hand, So Mi Dar and Wuheida were conceived. In other words, there was good reason to have high expectations of Dubawi’s partnership with Singspiel mares.

Even so, as a pedigree buff, I have to think that the combination of their bloodlines has been an essential part of their success. Wuheida is the 19th of Dubawi’s European-bred progeny to have won at Group 1 level and eight of them have pedigrees carrying duplications in the first five generations to either Shirley Heights, his sire Mill Reef or Mill Reef’s sire Never Bend.

Left Hand and Wuheida are among the five with two lines to Shirley Heights. As with Arabian Queen, their inbreeding is 4 x 5, but with Al Kazeem and Hunter’s Light it was 4 x 3.

Shirley Heights was a thoroughly tough and genuine racehorse, as he showed in snatching victory in tight finishes to the Derby and Irish Derby. He wasn’t without his quirks though, as might have been expected of a member of the Nasrullah male line, and some of his daughters tended to flash their tails under pressure.

When trying to establish why a nick works well, people underestimate the relevance of location

It has long been my belief that a bit of temperament, or high mettle, can be a plus rather than a minus in a stallion, especially if it translates into a will to win. However, Wuheida’s pedigree also contains a 5 x 5 duplication to Sunbittern, a filly who took things too far. This daughter of Sea Hawk II dug in her toes and unseated her rider soon after the break on her second three-year-old start and simply refused to race on her final appearance.

She earned a Timeform squiggle in the process. Fortunately, she had been much more co-operative in her first season, when she won her first three starts before finishing fourth in the Cheveley Park.

Duplications to Sunbittern are not uncommon among Dubawi’s progeny. She appears in Dubawi’s pedigree as his fourth dam and she was also the second dam of In The Wings, the top-class Sadler’s Wells horse who sired Singspiel.

We are surely going to hear more of the Dubawi-Singspiel partnership – and not just from Wuheida and So Mi Dar in 2017. Dubawi’s 2015 crop contains six youngsters out of daughters of Singspiel, comprising colts out of Connecting, the Grade 1 winner Folk Opera, Indian Petal and Inner Secret, as well as fillies out of So Mi Dar’s dam Dar Re Mi and Love Charm. Five of them were bred by Godolphin or Darley, with Godolphin also owning two youngsters out of Rahy mares.

Up Next
Almanzor and Crowley are worthy champions