All breeders great and small strike at Ascot
Exclusive Columns

For as long as I’ve been following racing, and for a century and a half before then, the Derby has been the race that everyone – breeders, owners, trainers and jockeys – wants to win. As such, we recognise it as an end in itself, the summit of every horseman’s ambition, the reason why many become involved, and that sense was admirably expressed to me by Lord Howard de Walden after Slip Anchor’s Epsom romp in 1985: ‘Mission accomplished – at last.’

And winning it invariably prompts the desire to win it again. The Coolmore partners make it their prime objective every spring, so Aidan O’Brien regularly turns up mob-handed for another shot at Derby glory for patrons who have become addicted; they don’t find it boring to register regular victories in the world’s most fabled Classic.

The Derby may mean mission accomplished for the winning connections, but it does not represent the culmination of anything when it comes to establishing the best three-year-olds

But while the Derby may mean mission accomplished for the winning connections, it does not represent the culmination of anything when it comes to establishing the pecking order among middle-distance three-year-olds. It’s a rare year when it does no more than confirm previous impressions; it’s generally better characterised as a fact-finding exercise about a group of colts who have yet to realise their true potential and whose peak may come months later. Sea-Bird won his Derby in a canter, but how much better was he on Arc day? The best part of a stone, I would surmise.

We are only just beginning to form a view about the merits of the 2017 three-year-olds at middle distances, and I think it’s fair to say that the Derby did not allow us to get very excited about them. But what were we to expect? The field of 18 included not a single previous Group 1 winner, although that did not necessarily indicate that the Classic crop were not up to much, as we were entitled to assume that there would be significant improvers, perhaps relishing a longer distance.

And yet, what were we to make of the fact that the colt who graduated to Group 1 success at Epsom had previously won only a maiden, and had finished ninth in his only previous venture at the top level, in the Criterium de Saint-Cloud last backend? The only Wings Of Eagles to have penetrated my consciousness before was a rather indifferent 1957 movie, one of the less notable collaborations between John Wayne and John Ford. Most people acquainted with the colt of that name assumed that he would feature as just an extra in the Derby, and for the first nine furlongs of the race that was what he appeared to be, but he fairly flew at the finish, much to the delight of the bookmaking fraternity. 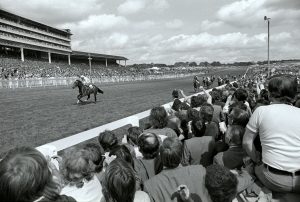 Troy and Willie Carson win an outstanding Derby in 1979

It was tempting to rate the colt on a similar level to the film, such was the shock induced by his victory. That probably meant that the whole crop was no great shakes. I was inclined to feel that Enable had won her Oaks in more impressive style and might be the best of either sex at a mile and a half.

But then I realised that I was forgetting my own sermon, the one I’ve been preaching these past 40 years. It’s too early to be writing off a crop as sub-standard. The Derby does not mean that sweeping conclusions can be drawn. It just provides the first hints about the group’s class, and there will be plenty of unravelling to come, as we assess and compare the various strands of form.

My mind goes back to the spring of 1979, when we were all looking forward to the reappearance of the previous season’s champion European juvenile Tromos, whose victory in the Dewhurst impressed many as the best two-year-old performance of recent years.

A big, strong sort, by Busted out of a top-class mare, he seemed a ready-made Classic winner, the Guineas surely at his mercy. But on his return he suffered a tame defeat in the Craven Stakes, promptly picked up a virus and was never seen again.

By Guineas day we had a new and surely worthy favourite in Kris, who was unbeaten in five starts, including the recent Greenham Stakes. But he contrived to get beaten by Tap On Wood, the most exposed runner in the field, making his 16th career start. The season was not turning out as we had expected.

I didn’t head for Epsom with any great expectations, although it was the landmark 200th edition of the Derby. There were going to be 23 runners, the market being headed by Ela-Mana-Mou, second best to Tromos among the 1978 juveniles and recent winner of the Heath Stakes at the Craven meeting. Only two of the contenders had a Group 1 win on their CV – Tap On Wood and the Irish Guineas hero Dickens Hill – and both seemed unlikely to excel again over the mile and a half. There was nothing in the form book to indicate that this was a distinguished crop.

But that Derby was to produce a striking performance, and I remember it well. These days the facilities provided for the press to watch the race leave a lot to be desired, but in 1979 we still had a marvellous pitch at the top of the stand, and I have vivid recall of Troy’s triumphant charge up the centre of the course. Rather like Wings Of Eagles last month, the Ballymacoll-bred colt had a dozen or more rivals ahead of him at Tattenham Corner, but when Willie Carson pulled him out of traffic and asked him to lengthen stride the effect was explosive. He eventually had seven lengths to spare over Dickens Hill, and there were three more lengths back to Northern Baby in third.

Another sharp image I lodged in the memory bank that day was acquired because the press stand was adjacent to the Royal Box. The word beforehand out of the Dick Hern stable was that there was little to choose between Troy and the Queen’s runner Milford, and to judge from Her Majesty’s expression at the end of the race, that was what she had been led to believe. She was clearly not amused as Milford trudged in tenth, 20 lengths behind the winner.

Derbys are not usually won quite as emphatically as that, so Troy was duly recognised at once as a high-class performer.

But none of the vanquished had previously seemed outstanding, so it was perhaps possible that he was just the best of an ordinary group. We would have to wait and see what later results indicated.

The first test of the form came at Ascot, where Derby fourth Ela-Mana-Mou won the King Edward VII Stakes. Then Troy collected his second Derby on the Curragh, with Dickens Hill again his runner-up, four lengths adrift this time. A week later Dickens Hill won the Eclipse against older rivals.

Troy’s season was further embellished by victories in the King George, with Ela-Mana-Mou in third place, and the Benson & Hedges Gold Cup, with Derby fifth Lyphard’s Wish an honourable third, before a valiant but unsuccessful effort in third to Three Troikas in the Arc. We had a pretty good idea of how gifted an athlete he was by then.

What of Troy’s other Derby victims? Son Of Love, a 200-1 shot and only 15th at Epsom, returned to win the St Leger, with Niniski in third place. Niniski, a stablemate of Troy who had finished ninth in the Derby, proceeded to win the Irish St Leger and the French equivalent, the Prix Royal Oak. The last example of the worth of the Derby form in 1979 came with Northern Baby’s win in the Champion Stakes, but further compliments were to come in 1980, with Ela-Mana-Mou’s victories in the Eclipse and King George.

Yes, no doubt about it. Troy was an outstanding Derby winner. How we eventually rank Wings Of Eagles is an intriguing question for the coming months, as he and his Epsom victims are subjected to further serious tests.

Up Next
All breeders great and small strike at Ascot