Nathaniel’s son from his sixth crop, Desert Crown, shows what breeders are missing out on

Although having a superstar stallion, such as Sadler’s Wells and Galileo, as their sire potentially confers a sizeable amount of privilege on these stallions’ sons, there can also be a downside. With more and more sons of the superstar queueing up for a place as a stallion, a young stallion has to make a fast start if he’s to maintain support worthy of his racing record. And even the older sons which have demonstrated their ability to sire first-rate stock can find the notoriously fickle breeding community turning its attention to the newer, shinier younger versions.

There is arguably no finer example of the need to make a quick start than the 2002 Derby winner High Chaparral. This excellent son of Sadler’s Wells numbered the Racing Post Trophy, Derby, Irish Derby and two editions of the Breeders’ Cup Turf among his six Group 1 successes, yet this wasn’t enough to earn him a bit of patience. His retirement to Coolmore at a fee of €35,000 at the end of 2003 came at a time when some were still questioning Sadler’s Wells’s ability as a sire of sires. Although Montjeu and Galileo were soon to dispel any doubts, it was only natural that breeders increasingly turned to these two, rather than the unproven High Chaparral. Consequently, High Chaparral’s fee fell by €5,000 every season until it reached only €10,000 in 2009 in his sixth season. Clearly High Chaparral hadn’t lived up to expectations with his first runners in 2007 and 2008.

Although High Chaparral had already been covering some National Hunt mares prior to 2009, his 2009 book included enough mares with National Hunt backgrounds to suggest that he was in danger of becoming a full-time jumping sire. And one of those mares, Monte Solaro, was to produce Altior, one of jump racing’s all-time greats. High Chaparral’s black-type-winning hurdlers Caracci Apache and Different Gravey were other members of his 2010 crop which went straight to National Hunt careers.

Fortunately, his fortunes as a Flat sire took a distinct turn for the better in 2009, with a string of Group winners in Europe and a couple of major performers in Australia, including the excellent So You Think. And his 2010 crop included not only Altior but also the top-notch miler Toronado, who – alongside So You Think and Dundeel – has been responsible for a growing list of Group 1 winners by sons of High Chaparral.

Now it will be interesting to see whether Galileo’s son Nathaniel is also going to be able to redirect his own stallion career, following the emergence of Derby winner Desert Crown from his sixth crop. In winning the Dante Stakes with plenty to spare, the lightly-raced Desert Crown became the 16th Group winner and 25th stakes winner to emerge from those six crops, and there should be more to come from that sixth crop which – at 114 foals – is one of his largest. It was conceived after Nathaniel’s brilliant daughter Enable had won the Oaks, Irish Oaks and the Arc, in addition to following in Nathaniel’s footsteps by winning the King George as a three-year-old. 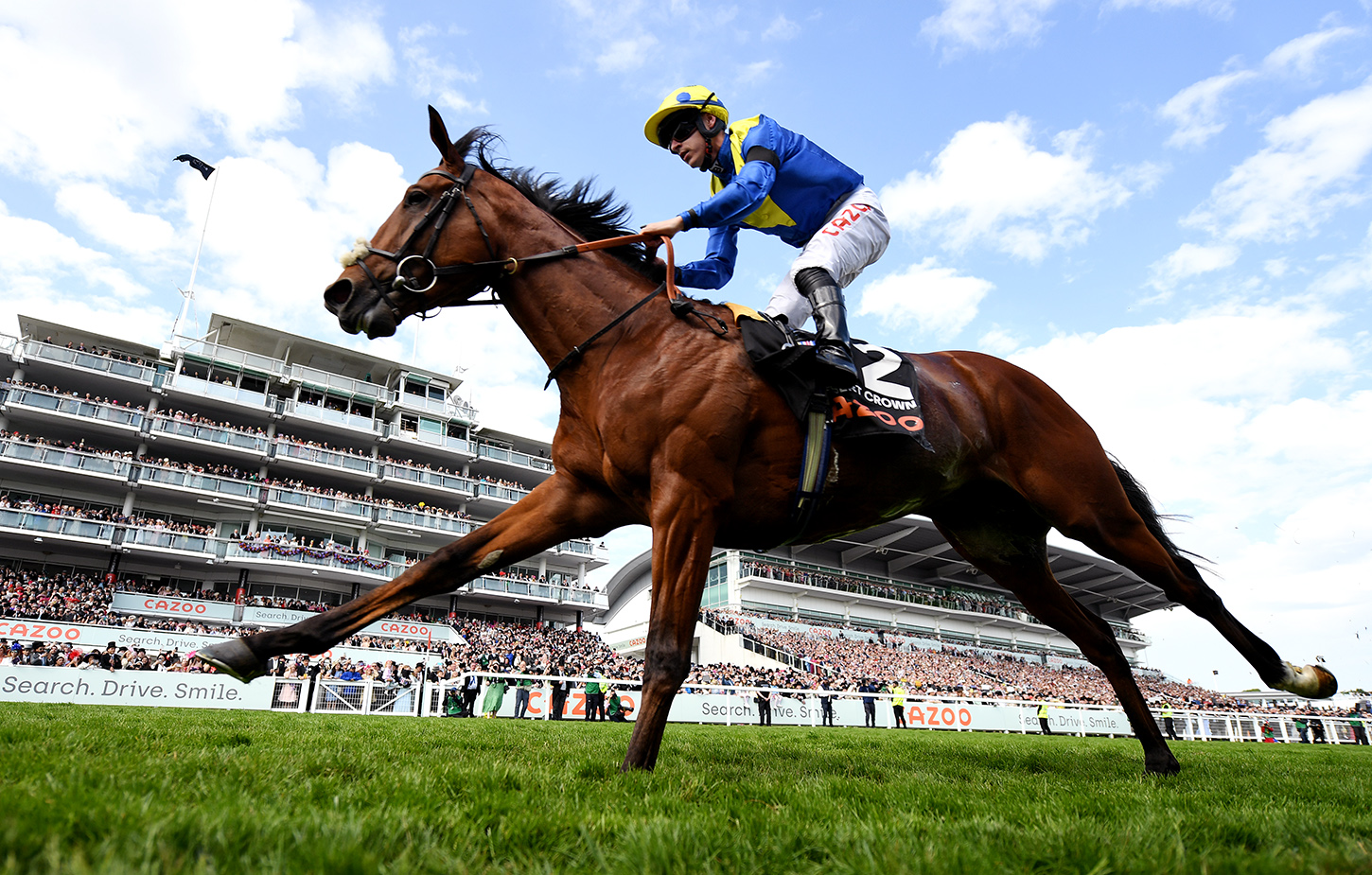 The 2018 season was also very fruitful for Nathaniel, with Enable leading a team of six Group winners, but that didn’t translate into huge demand for his services in 2019, when he covered 102 mares for a crop of 88. Perhaps part of the problem was that Nathaniel was becoming known as a better sire of fillies than colts. Even now, his 16 Group winners are made up of nine fillies, compared to only six males. And five of his Group 1 winners – Enable, Channel, Lady Bowthorpe, God Given and Mutamakina – are fillies. However, Desert Crown follows Dashing Willoughby and Bubble Gift as the third son to win at Group 2 level or higher.

The other aspect of Nathaniel’s record which probably counts against him is that his progeny have an average winning distance of 11.9 furlongs, boosted by Dashing Willoughby’s victories in the Queen’s Vase and Henry II Stakes, God Given’s win in the Park Hill Stakes and Pillaster’s win in the Lillie Langtry Stakes. Perhaps it’s time to remind owners and breeders that Dashing Willoughby earned more than £210,000, while God Given and Pilaster respectively amassed earnings of £376,000 and £235,000.

Although Nathaniel was represented by Group winners in Britain, the USA and Australia in 2020, with Enable again winning the King George, breeders appear to have been more impressed by his Flat-bred progeny which were tried over hurdles during the 2020-21 season. They included Navajo Pass, winner of the Unibet Hurdle, Concertista, a Grade 2-winning mare in Britain and Ireland who has since won a pair of Grade 2 novice chases, and Zanahiyr, a leading juvenile hurdler in Ireland who has since finished third in the Champion Hurdle.

The consequence was that at least half of the 133 mares covered by Nathaniel in 2021 could be said to have a National Hunt background. Among them were daughters of several champion National Hunt sires, including seven by four-time champion Presenting and three by six-time champion King’s Theatre, as well as others by Beneficial, Flemensfirth, Milan and Stowaway. Other notable jumping sires with more than one representative in Nathaniel’s book included Martaline (4), Midnight Legend (4), Saint Des Saints (3), Poliglote, Robin des Champs and Kayf Tara.

The mares worthy of mention included M’Oubliez Pas, dam of Nathaniel’s Triumph Hurdle winner Burning Victory; Moraine, dam of the admirably versatile Wicklow Brave; and those successful broodmares Tinagoodnight and Katioucha, dams respectively of Santini and Nirvana du Berlais. Another with a good winner to her name is My Petra, dam of the Grade 1 novice hurdle winner My Drago.

At the same time, there were enough good mares in Nathaniel’s book to allow him to keep making a sizeable impact on the Flat. Among them were Concentric, who produced a brother to Enable in April, as well as the dams of Aspetar, Marmelo and Desert Crown. 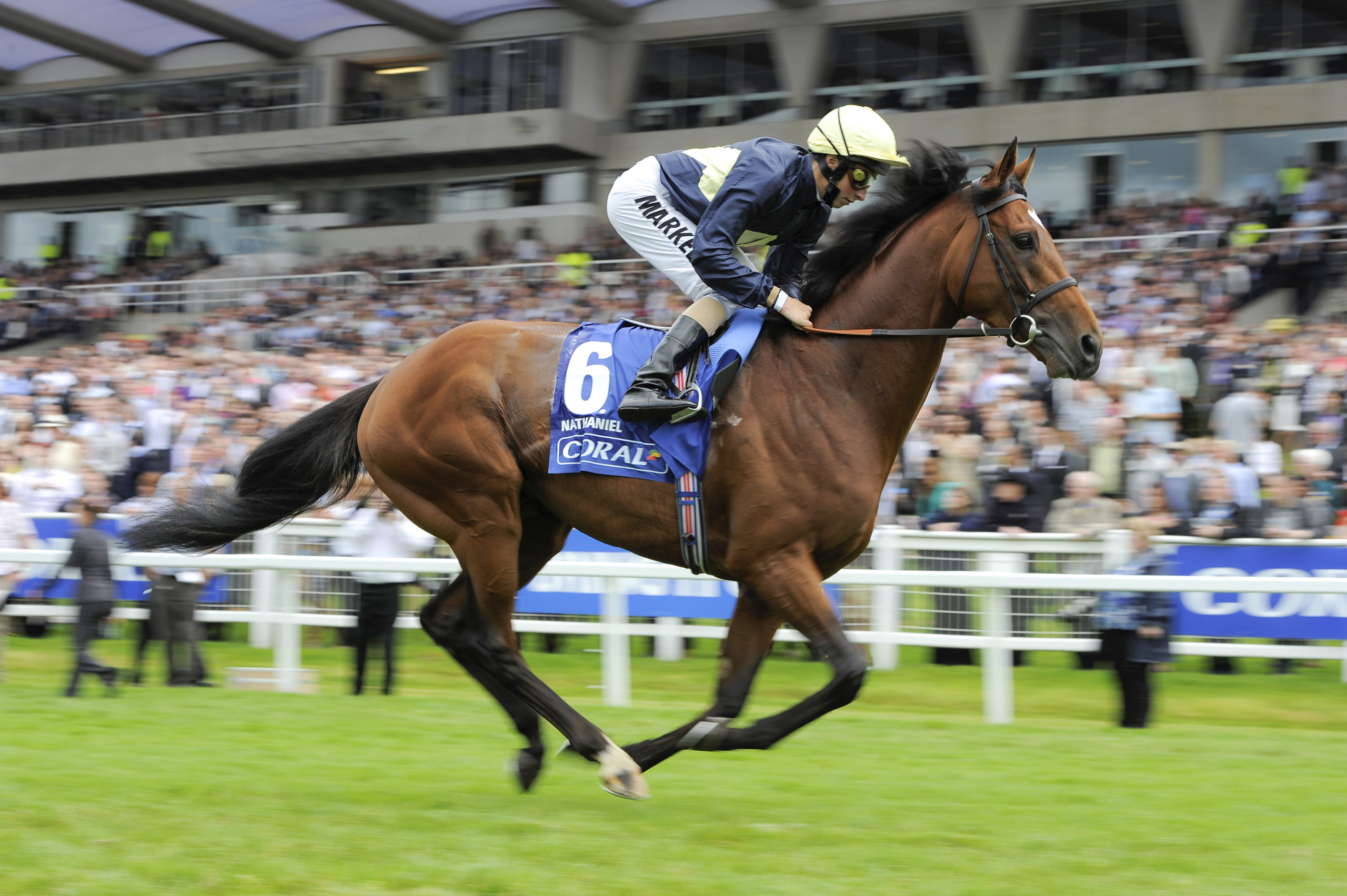 Another tried-and-tested son of Galileo who arguably merits more interest from breeders is Teofilo, who has been making his mark in a variety of roles.

Yet how many of those younger sons will prove capable of compiling a CV which features winners of the Dewhurst Stakes, Irish 1,000 Guineas, Irish Derby, Irish St Leger, Gold Cup, Yorkshire Oaks, Criterium International, Criterium de Saint-Cloud, Prix Jean Prat, Prix Jean Romanet, Prix Saint-Alary, Prix Royal-Oak (two), Prix du Cadran and Preis von Europa, as well as two northern- hemisphere-sired winners of the Melbourne Cup? As this list shows, Teofilo’s progeny – like Nathaniel’s – often possess more stamina than is currently fashionable, but he was still able to sire five Group 1 winners on his visits to Australia, where the emphasis is firmly on speed.

It mustn’t be forgotten that Teofilo was fast enough to become the champion two-year-old of 2006, when he won both the National and Dewhurst Stakes over seven furlongs, and it is most likely that he would have been a 2,000 Guineas candidate had he stayed sound – just like the similarly-bred Frankel. And it has been the Guineas races which have highlighted his brilliant start to his career as a broodmare sire.

Last year’s Irish 2,000 Guineas fell to Mac Swiney, a New Approach colt inbred 2 x 3 to Galileo, the second line coming via Teofilo’s daughter Halla Na Saoire. And now Teofilo’s daughters have pulled off a tremendous Guineas double thanks to the exciting Coroebus in the 2,000 Guineas and to the admirably tough Cachet in the 1,000 Guineas. Cachet failed by only a head to add a fourth Guineas to Teofilo’s collection, when touched off in the Poule d’Essai des Pouliches. The Guineas meeting also saw the Dahlia Stakes fall to Dreamloper, a Lope de Vega mare out of Teofilo’s daughter Livia’s Dream. 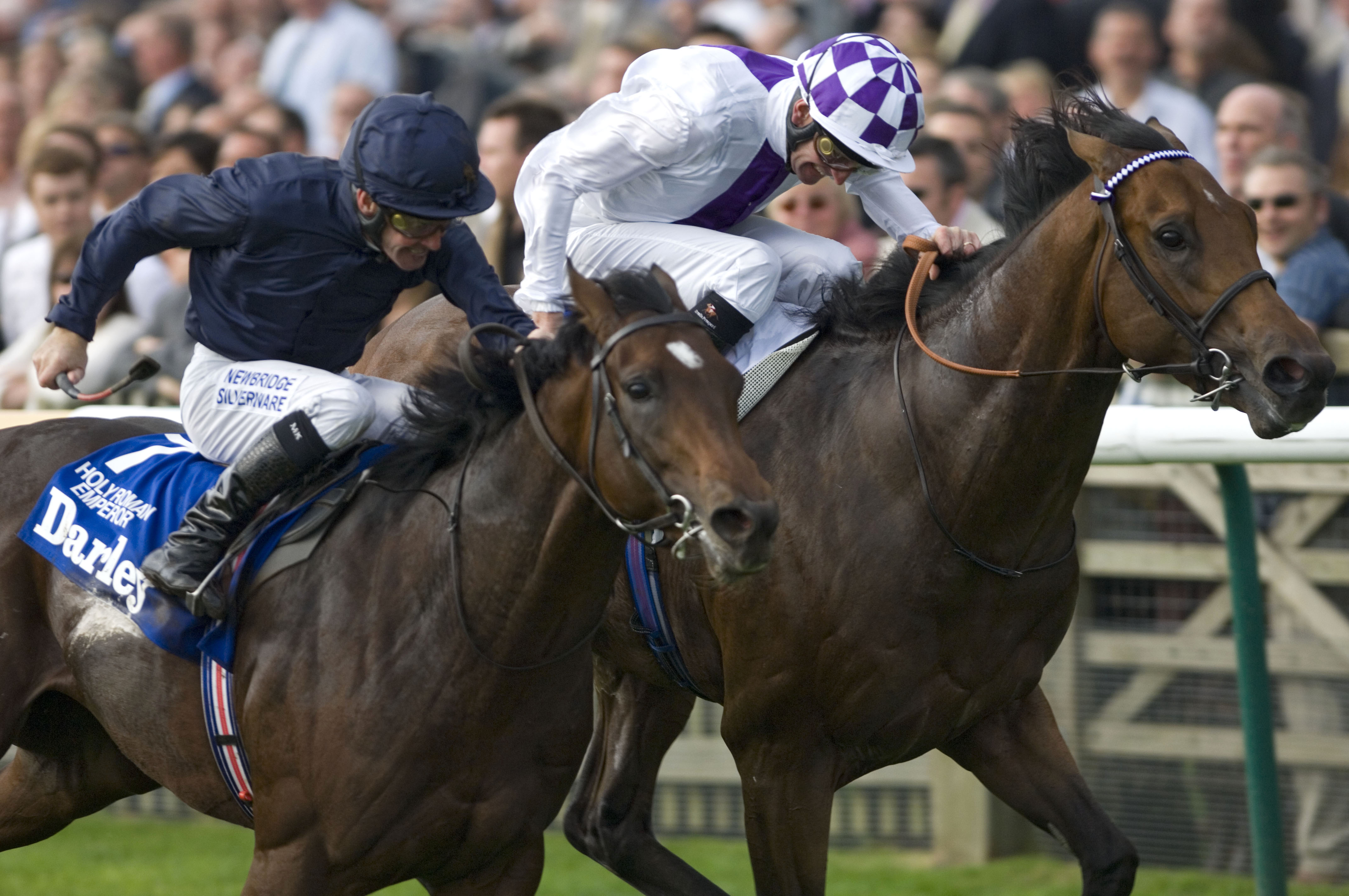 It is worth adding that Mac Swiney’s dam never raced, while Cachet’s dam Poyle Sophie failed to win in six starts, coming closest to victory when a head second over a mile and a half at Kempton.

It is a very different story with Coroebus, whose dam First Victory won the Oh So Sharp Stakes over seven furlongs, in the process becoming one of six black-type winners out of the excellent broodmare Eastern Joy. Four of the six scored at Group level, the others being headed by the dual Dubai World Cup winner Thunder Snow.

Mention of First Victory is a reminder that her dam Eastern Joy is a half-sister to the Prix de Diane winner West Wind. West Wind, in turn, is the dam of Derby entry West Wind Blows, an unbeaten three- year-old Teofilo colt who was designated a ‘TDN Rising Star’ following his five- length success in a novice race at Nottingham on his reappearance. He is not the only promising colt from Teofilo’s comparatively small 2019 crop, as it also includes Nations Pride, who was winning for the fourth consecutive time when he landed the Newmarket Stakes by seven lengths.

Teofilo hasn’t had enough stallion sons to assess his exact worth as a sire of sires. However, his Australian-based son Kermadec already has two Group 1 winners to his credit, including the high-class middle-distance filly Montefilia and the VRC Oaks winner Willowy. In Europe, Teofilo’s Prix Jean Prat winner Havana Gold sired the very speedy Havana Grey in his first crop and now Havana Grey’s own first crop of two-year- olds are already catching the eye, with ten winners already in the bag by mid-May, including a potentially smart filly in the dual winner Katey Kontent.

So it looks as though Teofilo’s influence is going to be not only substantial but varied. 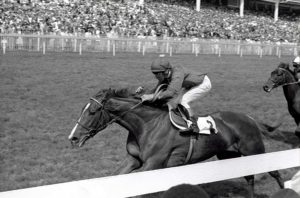 Up Next
Dreamloper pays further tribute to Felsetta line