It was a pleasure to be able to go along to Dalham Hall Stud to inspect Golden Horn during the December Sales. For a start, this son of Cape Cross is an admirable specimen. Not only was he tough, talented and totally honest but he is also a quality individual, with a very attractive head, correct knees and a strong rear end. He’s also a good walker, as are many of the best stallions. 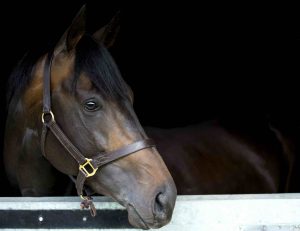 But, more than that, Golden Horn won the Derby, a race that continues to exert a big influence on the UK and Irish thoroughbred industries, despite being contested over a mile and a half – a distance that (wrongly) is out of favour with the majority of breeders.

To illustrate this point, the new British and Irish stallions for 2016 number nearly 20 but only two of them won over a mile and a half or more, namely Golden Horn and Derby runner-up Kingston Hill (who has been priced at €6,000 in a bid to overcome Flat breeders’ apparent aversion to St Leger winners).

Federico Tesio famously said that ‘the thoroughbred exists because its selection has depended, not on experts, technicians, or zoologists, but on a piece of wood: the winning post of the Epsom Derby.’ This still holds good today

Federico Tesio famously said that “the thoroughbred exists because its selection has depended, not on experts, technicians, or zoologists, but on a piece of wood: the winning post of the Epsom Derby.” This still holds good today, thanks largely to Coolmore and Darley. Although there are more than 40 Flat stallions in Ireland standing at €10,000 or more, only six of them won over a distance as long as a mile and a half and all six won the Derby – Galileo, Sea The Stars, Australia, Camelot, Pour Moi and Ruler Of The World.

Similarly, there are nearly 40 stallions in Britain priced at £7,000 or more. Only seven of them won over a mile and a half but they include three winners of the Derby – Golden Horn, New Approach and Sir Percy – as well as Sea The Stars’s Deutsches Derby winner Sea The Moon. For the record, France also has two Epsom Derby winners, Motivator and Authorized, which means that ten of the last 11 Derby winners are still available to European breeders. The one who got away was Workforce, sire of 13 first-crop two-year-old winners in Japan by late November. We also recently lost the 2002 Derby winner High Chaparral, whose legacy includes the stallions Free Eagle, Toronado and So You Think.

An exceptional legacy
Of course the most exceptional legacy belongs to Galileo. With Gleneagles joining the Coolmore team at a fee of €60,000, Galileo now has five sons standing at the equivalent of €50,000 or more, namely Frankel (£125,000), New Approach (£60,000), Gleneagles (€60,000), Australia (€50,000) and Teofilo (€50,000). The only ones old enough to have had runners are Teofilo, who added the Irish 1,000 Guineas winner Pleascach to his earlier winners of the Irish Derby and Irish St Leger, and New Approach, whose first crop contained winners of the 2,000 Guineas and Oaks, plus the runners-up in the Derby and St Leger. The fact that New Approach’s fee has dropped from £80,000 to £60,000 reflects the fact that he is in a bit of a lull at the moment, but he should bounce back very soon.

And don’t forget Galileo’s tough son Nathaniel (£20,000), who rather surprisingly had the distinction of being the only King George winner covering Flat mares in Britain or Ireland in 2015. With his first yearlings selling for such good prices as 675,000gns, 600,000gns, 525,000gns and 500,000gns, let’s hope that Nathaniel has the potential to follow the example of Montjeu, the last outstanding stallion to win the King George. (I should add though, that three other King George winners – Duke Of Marmalade, Dylan Thomas and Azamour – were collectively responsible in 2015 for the winners of the St Leger, British Champions Fillies and Mares, Deutsches Derby, Prix de Diane, Coronation Cup, Premio Roma, Preis von Europa, Dubai Sheema Classic, Irish Oaks and Prix de l’Opera. Clearly breeders ignore top-class mile-and-a-half horses at their peril, especially when many of the most valuable races are contested over middle distances.)

Galileo’s dam Urban Sea also gets into the act as the dam of Sea The Stars. With his second crop being considerably smaller than his first, Sea The Stars was always going to find it hard to match the success he enjoyed with Taghrooda, Sea The Moon and Vazira. However, I believe 18 of his 66 second-crop foals have so far earned black type, with nine of them – a very encouraging 13.6% – becoming stakes winners. The hard-working Storm The Stars follows Taghrooda as Sea The Stars’ second notable winner out of Sadler’s Wells mares. There was plenty of demand for Sea The Stars’ best young stock in 2015 and his 2016 crop should be exciting.

Most of the mile-and-a-half-winning stallions mentioned so far are at the upper end of the price scale, but spare a thought for some of the others further down the pecking order. Pour Moi and Ruler Of The World are available for only €10,000 in 2016, and you can access the likes of Champs Elysees for £8,000 and Sir Percy for £7,000. With Trip To Paris and Jack Naylor to his credit, Champs Elysees finished among the top 30 stallions in 2015, despite having a lot fewer runners in Britain and Ireland than many of the top stallions.

Sir Percy also reached the top 40, and reminded everyone that winning over a mile and a half and siring plenty of two-year-old winners are not mutually exclusive. From a crop of 98, Sir Percy sired 17 juvenile winners throughout Europe.

Spare a thought too for Nayef, whose efforts over a mile and a half included a win in the Dubai Sheema Classic and a second in the King George. He had just over 100 runners in Britain and Ireland, compared to Kodiac’s 320 and Exceed And Excel’s 297. Even so, four of Nayef’s 2015 representatives achieved Racing Post ratings of 112 or more, including the Group winners Snow Sky, Forgotten Rules and Mustajeeb.

Believe it or not, Nayef received only 16 mares in 2014, 50 in 2015 and his fee for 2016 again stands as low as £5,000. This begs the question how many of the speed stallions that cover many more mares than Nayef will ever be represented by three Group winners in a single year.

Breeders who flock to the speed sires would argue they have a better chance of a substantial return in the sales ring, but why should this be, when there is so much money to be won beyond a mile?

Up Next
A gifted writer, innovator and mentor