Blessed by Noblesse even if our paths never crossed
Exclusive Columns

Maybe, Minding, Hydrangea and Rhododendron among brilliant European racemares in foal to the late Shadai stallion

As someone who has championed the Sunday Silence line for many years, the news was particularly unwelcome. It reminded me that as long ago as March 2006 I wrote the following for Thoroughbred Owner & Breeder:

“As Sunday Silence’s son Heart’s Cry strode home an impressive winner of the Dubai Sheema Classic…I couldn’t help thinking back to an email I received late last year from a Japanese contact. Could I make enquiries, I was asked, into whether there was any truth in rumours circulating in Japan that Coolmore and Darley were both interested in buying Sunday Silence’s star son Deep Impact? Tentative enquiries failed to substantiate the rumours but I wish the story had been true. Deep Impact, or another of Sunday Silence’s top-class sons such as Heart’s Cry, would be a very welcome addition to Britain or Ireland’s stallion roster, adding strength to the valuable Hail To Reason male line.”

I also ventured the possibility that “Japan could one day come to the rescue of the rest of the thoroughbred world, both as a source of top-class staying blood and as a stronghold of the Hail To Reason line.”

“Deep Impact received an injection of extra stamina via his dam, Wind In Her Hair”

Sadly, Europe failed to obtain the services of any of Sunday Silence’s high-profile Japanese sons, which were guarded so proudly by Shadai, but his champion miler Hat Trick was obtained by America, where he sired the champion French two-year-old Dabirsim. [I should add that Layman, one of only a handful of European Group winners by Sunday Silence, ended up being transferred from France to Sweden after an uninspiring start to his stallion career. However, he hadn’t won at Group 1 or Group 2 level].

The wisdom of Shadai’s decision to retain as many of Sunday Silence’s sons as possible is underlined by the fact that at the time of writing, 17 years after Sunday Silence’s death at the age of 16, three of them – Deep Impact, Heart’s Cry and Stay Gold – occupy three of the top four places on Japan’s leading sires’ list. Two other sons – Daiwa Major and Gold Allure – occupy seventh and eighth positions, and the top 20 also features Manhattan Café and Deep Impact’s brother Black Tide, as well as a handful of Sunday Silence’s grandsons, including Arc runner-up Orfevre and Dubai World Cup winner Victoire Pisa.

When assessing Deep Impact, it should be remembered that his sire Sunday Silence ventured beyond a mile and a quarter only once during a 14-race career which yielded nine victories and five seconds. Significantly one of those five defeats came when he was soundly beaten by Easy Goer when attempting to complete the Triple Crown in a fast-run Belmont Stakes over a mile and a half.

Deep Impact received an injection of extra stamina via his dam, the Oaks second Wind In Her Hair, an Alzao mare whose second dam was the 1,000 Guineas and Prix de Diane winner Highclere. Deep Impact, of course, went one better than Sunday Silence in that he succeeded in completing his country’s Triple Crown, contested over ten, 12 and 15 furlongs, and he even won over two miles in the spring edition of the Tenno Sho (Emperor’s Cup).

It is a reflection of the Japanese racing programme that he was never asked to race over less than ten furlongs, even as a two-year-old. 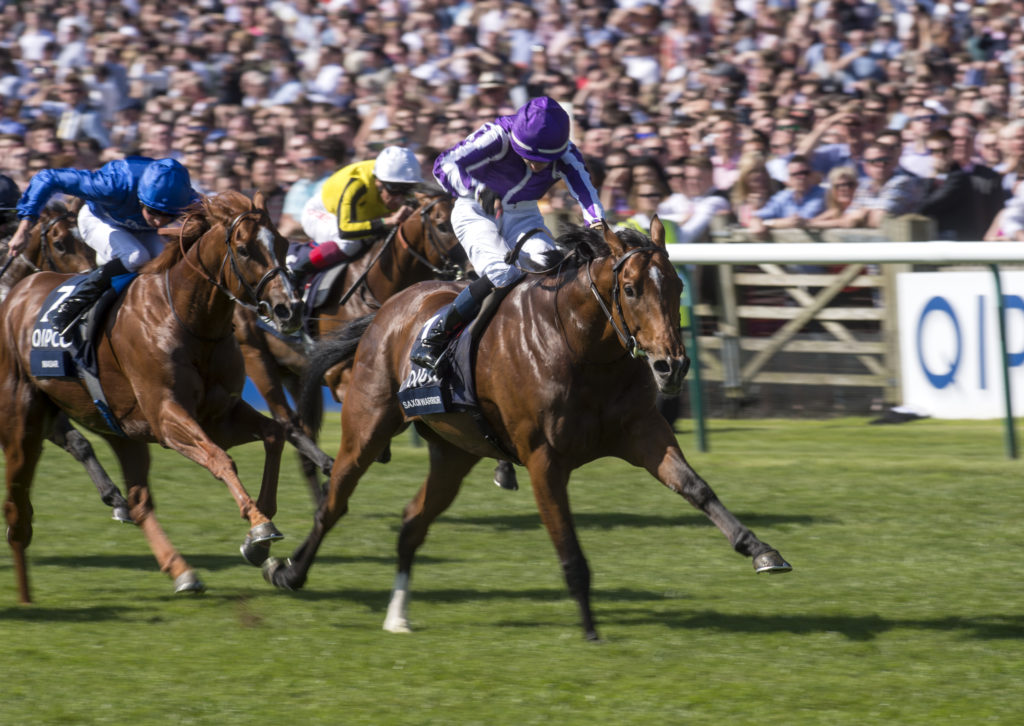 European breeders would probably shy away from any young stallion who never won at less than ten furlongs and who gained three of his 12 wins over 15 furlongs or more. However, Deep Impact’s pedigree and his achievements as a stallion lead me to believe that he would have been capable of shining over more conventional distances had he been trained in Europe. At this point it is relevant to mention that Natagora was fast enough to win the Cheveley Park Stakes and the 1,000 Guineas even though she was by a Sunday Silence stallion, Divine Light, who raced at up to a mile and a half (admittedly showing his best form over shorter distances).

Deep Impact sired four consecutive winners of the Oka Sho, with Marcellina, Gentildonna, Ayusan and Harp Star all taking this mile equivalent of the 1,000 Guineas. Gran Alegria became his fifth winner of this Classic in 2019. We have also seen his daughter Beauty Parlour win the French 1,000 Guineas and his son Saxon Warrior take the 2,000 Guineas.

Deep Impact has also sired at least two winners of each of Japan’s four other Group 1 races over a mile for horses aged three or over. He has two winners of the NHK Mile Cup (Mikki Isle, whose dam is by Rock Of Gibraltar, and Keiai Nautique, out of a mare by Kentucky Derby winner Smarty Jones), two of the Victoria Mile (two-time winner Verxina, out of a Machiavellian mare, and Jour Polaire, out of a daughter of Arc winner Helissio) and two of the Yasuda Kinen (Real Impact, out of a daughter of Meadowlake, and Satono Aladdin, out of a Storm Cat mare). His three winners of Kyoto’s Mile Championship are Mikki Isle, Tosen Ra, whose dam was by Lycius, and Danon Shark, out of a very stoutly-bred mare by French Derby winner Caerleon.

In addition to Beauty Parlour, Deep Impact has enjoyed Group success in France with Geniale (Group 3 Prix Messidor over a mile), Akihiro (Group 3 Prix des Chenes over a mile), A Shin Hikari (Group 1 Prix d’Ispahan over nine furlongs), Aquamarine (Group 3 Prix Allez France over ten furlongs), Study Of Man (Group 1 Prix du Jockey Club and Group 2 Prix Greffulhe over ten and a half furlongs) and Kizuna and Makahiki (both winners of the Group 2 Prix Niel over a mile and a half). Although his French Group winners also include the stayer Bartaba, this collection hardly suggests that Deep Impact was purely an influence for stamina.

So what can we look forward to in terms of Deep Impact’s legacy?

The Shadai stallion team already features plenty of his sons, such as the Japanese Derby winners Kizuna and Deep Brillante (now at the Breeders Stallion Station), the champion sprinter and miler Mikki Isle, the Japanese and Australian Group 1 winner Real Impact, the Dubai Turf winner Real Steel and the durable miler Satono Aladdin. They will surely be joined by several others over the next few years. Kizuna and Real Impact currently hold first and second places among this year’s leading first-crop sires and Kizuna already has his first Graded winner in Bien Fait. 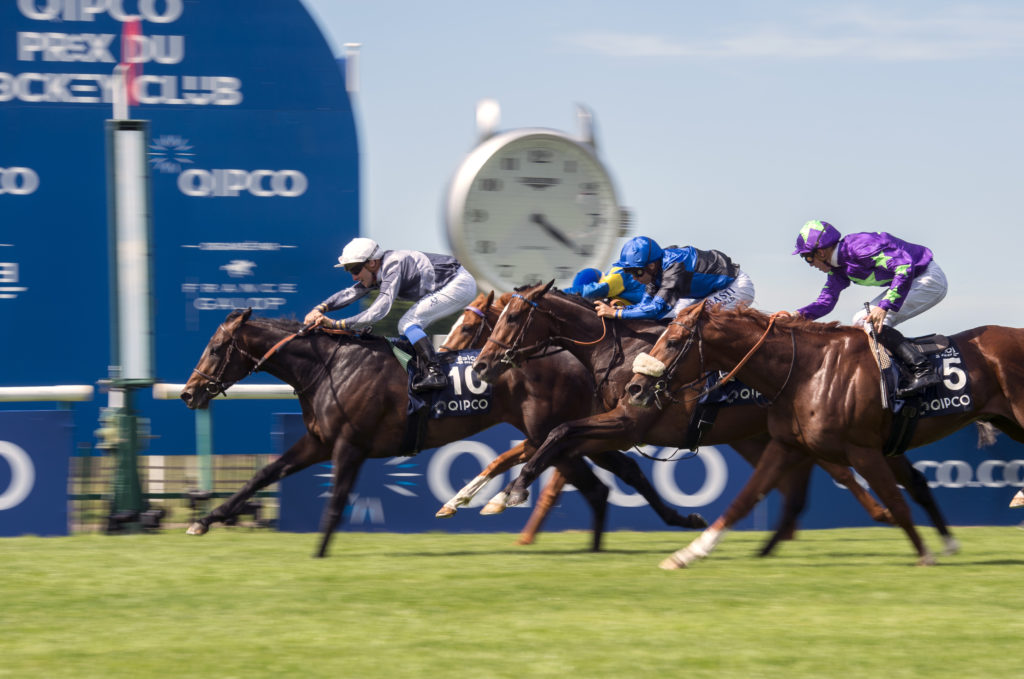 Over in Europe there are high hopes of Saxon Warrior, who was considered a potential Triple Crown winner after his successes in the Racing Post Trophy and the 2,000 Guineas. Subsequent events suggested that he was best at distances short of a mile and a half, no doubt because his dam, the Galileo mare Maybe, was a fast-maturing champion two-year- old who shone over seven furlongs.

A shortage of stamina has never been a disadvantage for a stallion in Ireland and Saxon Warrior was welcomed very warmly in 2019, covering a book of 165 mares at a fee of €30,000. He has 32 Group winners or dams of Group winners in foal to him, including the 1,000 Guineas winner Homecoming Queen and those outstanding producers Approach and Cassandra Go.

Saxon Warrior’s trainer Aidan O’Brien has at least two Deep Impact two-year-olds. One, Star Of Juniper, is a son of Kissed By Angels, a Group 3-winning sister to dual Classic winner Minding, while Fancy Blue is a half-sister to those very useful performers Smuggler’s Cove and Casterton.

Because of the high regard in which Saxon Warrior was held, Coolmore continued to give strong support to Deep Impact over the last few years, often with outstanding daughters of Galileo. For example, Hydrangea, Maybe, Minding and Rhododendron – winners collectively of 13 Group 1 races – were all tested in foal to Deep Impact before his physical problems forced Shadai to take him out of service in March.

The Coolmore partners also have 2018 and 2019 Deep Impact colts out of Fluff, a winning sister to Maybe, as well as 2019 colts out of the 1,000 Guineas and Oaks winner Minding and the Group 3 two- year-old winner Promise To Be True. There is also a 2019 Deep Impact filly out of the excellent Winter, who numbered the 1,000 Guineas, Irish 1,000 Guineas and Coronation Stakes among her four Group 1 successes. Best In The World, a Group 3-winning sister to Arc heroine Found, has a 2018 filly.

Needless to say, Coolmore are by no means the only European breeders who have been supporting Deep Impact in recent years. The Queen, whose studs developed the female line responsible for Deep Impact, has a 2018 filly and 2019 colt out of her middle-distance Listed winner Diploma, and Pearl Thoroughbred Co Ltd has 2018 and 2019 fillies out of Galileo’s Listed winner Circling.

French-based breeders helped pioneer the idea of supporting Deep Impact, with the Wildenstein and Niarchos families and the Wertheimer brothers all enjoying success.

The Wertheimers also have some Deep Impact youngsters, as does Al Shaqab, with homebred yearlings out of mares by Doyen and Dynaformer and two-year-olds out of daughters of New Approach and Invincible Spirit.

So the horse whose only venture to Europe ended ignominiously, when a banned substance was found after he faded to third in Rail Link’s Arc, looks very well placed to leave a sizeable European legacy. 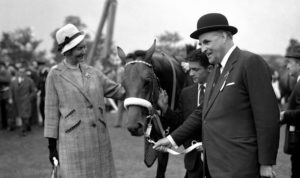 Up Next
Blessed by Noblesse even if our paths never crossed