Isn’t all racing the same? Not at all
Exclusive Columns

Next month the committee of the Racing Post Yearling Bonus Scheme will decide whether it is to continue for a fourth year. Since its inception in 2009, 11,943 of the 13,956 yearlings catalogued for sales in Britain and Ireland have been nominated by breeders for an initiative which has so far put more than £5 million into owners’ pockets by way of bonuses, with a further £2m to be paid out for last season’s yearlings.

One stable that will be hoping for its continuation is that of Richard Hannon, which has won a staggering 50 bonus races over the last two seasons – almost 10% of the entire number up for grabs all over Europe.

The scheme’s Chairman John Osborne has admitted to a division of opinion, saying: “A lot of people want to see it continue and some people feel it’s an unnecessary expense. The fund itself has fallen over the last year simply because the number of horses going through sales has fallen. That in itself makes the scheme less effective as we are unable to offer the same number of bonuses.

“Gratifyingly, the sales in 2011 were not as dreadful as they have been. The scheme’s stated purpose in bridging the trough in the bloodstock sales market has been achieved, so perhaps there’s less of a need for it.”

Osborne was quick to acknowledge, however, that the timing may not be right to take away bonuses when prize-money in the UK remains at concerning levels, despite the introduction of the Horsemen’s Group’s tariffs over the last year.

It is almost ten years since Osborne’s father Michael gave the Gimcrack Speech on behalf of Sheikh Mohammed after Country Reel’s victory in the race. Five years earlier, via the same platform, the sheikh had warned of a potential Maktoum withdrawal from British racing if the funding situation did not improve. While admitting that he had seen signs of progression in that time, albeit at a slow pace, his speech read: “To be blunt about it, the return to owners in Britain continues to languish on the pathetic side of poor. When you combine the costs of breeding or buying horses with the costs of putting those animals into training and set it against the amount returned in prize-money, the bottom line is that owners are losing hundreds of millions of pounds every year.”

It’s hard to argue that the situation has improved in the ensuing decade and, while bonus schemes and sales races provide a tremendous boost to those fortunate enough to win them, it must be remembered that owners and breeders are funding these initiatives while the return from others benefiting from the investment of the industry’s core participants remains woeful.

The sheikh’s 2002 speech also highlighted how underfunding of the sport was largely responsible for poor pay within the industry and called for “a new deal for stable staff”. Just a few years later those words were put into practice with generous sponsorship of the Godolphin Stud and Stable Staff Awards which were held for the eighth year this February. Congratulations are due to all those shortlisted in each category, including, from the breeding side, Graham Nicklin, Frances Eilbeck and Gordon Laing of Glebe Stud, Minster Stud and Fittocks Stud respectively.

As breeders, it is endlessly fascinating to pore over pedigrees and wonder which particular combination of bloodlines will provide the perfect racehorse, but the human element involved in bringing a thoroughbred from a nursery paddock to the racecourse cannot be underestimated. Good handlers and riders can make the world of difference when it comes to a young horse’s mental wellbeing, which is every bit as key as its physical development.

British racing is fortunate to have the patronage of the Maktoum family and its various operations which employ thousands of people in this country and beyond. Among the family’s many contributions to the sport, one of the most special is its recognition of the valuable work of those on the frontline offering hands-on care to the would-be champions all breeders strive to produce.

Appreciating the old boys
One of my favourite photographs of recent weeks was that of the 25-year-old Vintage Crop walking alongside his fellow honourable retirees Moscow Flyer and Florida Pearl at the Irish National Stud. 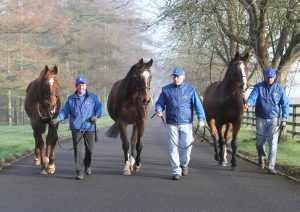 Fantastic moves have been made in recent years in retraining retired racehorses for other disciplines but there’s something special about simply being able to gaze at three such great horses, as visitors to the stud are able to. Grand National winner Amberleigh House was a star attraction at the National Stud in Newmarket and I’d like to see more made of those former champs who are not being utilised for breeding.

An essential port of call for any racing fans in Melbourne is the Living Legends retirement home near the airport. The Cox Plate winners Better Loosen Up and Fields Of Omagh are paddock-mates and they share the home with another Cox Plate winner Northerly, Melbourne Cup winners Brew, Might And Power and Rogan Josh, plus Caulfield Cup winner Paris Lane and the Hong Kong champions Bullish Luck and Silent Witness.

Surely a centre featuring some of our great jumpers and gelded stars of the Flat in retirement would make for a hugely popular day out for the many fans of racing in this country?

Up Next
Isn’t all racing the same? Not at all