Bourtai family back in the limelight
Exclusive Columns

Constitution laying down the Law

Constitution was already widely acknowledged as a bright young thing within American circles when the Owner Breeder caught up with WinStar Farm in January.

Sean Tugel, director of bloodstock services at the Kentucky-based outfit, spoke in glowing terms of their ascending resident, going so far as to compare him to the venerable Distorted Humor, a mainstay of the Winstar brand for over two decades.

“Constitution almost has a similar profile to Distorted Humor, who was kind of the blue-collar kid,” Tugel told Emma Berry. “Nobody really put him on a pedestal before he had runners but then he came out flying with his first crop of two-year-olds and just climbed the ladder. Constitution’s progeny winning at the racetracks they are winning at, he’s kind of saying ‘everybody watch me’.”

At that stage, Constitution had just been crowned the leading American first-crop sire of 2019 by number of stakes winners, his impressive haul of five including the Grade 1 Champagne Stakes winner Tiz The Law, Grade 2 scorer Almafi Sunrise and the Grade 3-winning pair By Your Side and Independence Hall. In addition, only American Pharoah stood between himself and overall champion first-crop sire honours but Constitution did tie with that rival in terms of winners on 27 (also matched by Tapiture).

The difference, of course, is that while American Pharoah attracted a strong, expensive book of mares in his first year that befitted a Triple Crown hero, Constitution was operating at the rather different opening level of $25,000. Nor did he run at two. Instead, the son of Tapit made a winning debut in mid-January of his three-year-old year prior to taking the Grade 1 Florida Derby on his third start for Todd Pletcher and the Grade 1 Donn Handicap at four.

“The WinStar marketing machine is now in full swing for Constitution”

Constitution was one of the positive surprises of 2019, and with that earned a fee rise to $40,000 for 2020 – although come January, such was the frenzied demand for the horse that a season changed hands for $72,000 at the Thoroughbred Charities of America auction in Kentucky.

It hasn’t been misplaced. The current crop of North American second-crop sires is one of the deepest for many years but even so, Constitution is overwhelming his peers as leader in terms of prize-money ($1.4 million – almost double his closest pursuer Tonalist) and black-type winners (three). He also jointly leads the way alongside Tapiture by winners with 16.

In an illustration of his growing importance, Saturday’s Grade 1 Florida Derby at Gulfstream Park contained three sons of Constitution in Tiz The Law, Independence Hall and the Grade 1-placed Gouverneur Morris.

Sadly likely to be the last top level racing event staged in the northern hemisphere for some time, it hosted a winning performance of real class from Tiz The Law. In a normal year, Sackatoga Stable’s colt would be heading to Churchill Downs on the first Saturday in May as a favourite for the Kentucky Derby.

But as we are painfully aware, this is far from an ordinary year and the dilemma now facing his trainer Barclay Tagg is the challenge of keeping his stable star fresh for the rescheduled Classic on September 5.

Constitution’s Classic prospects don’t end there, however, since Laura’s Light is also a live fancy for the Kentucky Oaks following her success in last month’s Grade 2 Sweet Life Stakes at Santa Anita Park.

Unsurprisingly, the WinStar marketing machine is now in full swing, with the current advert campaign celebrating Constitution as ‘The son of Tapit we’ve all been waiting for’.

Despite Tapit’s standing as one of America’s most important stallions of the recent era, his early (and more cheaply-bred) sons for the most part had failed to live up to early expectations, notably Hansen, Concord Point and Trappe Shot. Nor have Tapizar and Flashback achieved consistent success, for all that between them they have supplied champions Monomoy Girl and British Idiom.

Recent months have changed all that, not just through the deeds of Constitution but also Tonalist, the current second on the leading American second-crop sires list who has this year’s Grade 2 Davona Dale and Forward Gal Stakes winner Tonalist’s Shape representing him. And not far behind Tonalist in fourth is another son Tapiture, the sire of eight black-type horses among 38 winners bred off a low fee of $7,500 at Darby Dan Farm.

For now, however, it is Constitution’s show. Appropriately, Tiz The Law was bred in New York by Steve Davison and Randy Gullatt’s Twin Creeks Farm, who campaigned Constitution in partnership with WinStar. He is the fifth foal out of Grade 2 winner Tizfiz, in turn a daughter of WinStar stalwart Tiznow, and the mare’s second stakes horse following the Listed-placed Awestruck, a daughter of Tapit himself.

Although bred to be effective on dirt, Tizfiz found her best form on turf, on which she won the 2009 Grade 2 San Gorgonio Handicap at Santa Anita and a trio of Listed stakes. Five years later, her brother Fury Kapcori won the Grade 3 Precisionist Stakes on dirt at Santa Anita having run second 18 months previously in the Grade 1 CashCall Futurity on Hollywood Park’s Cushion Track.

So it’s a versatile family when it comes to surface and also one with plenty of class pointers beyond a mile, not only via the presence of Tiznow but also Go For Gin, the 1994 Kentucky Derby winner who appears as the damsire of Tizfit.

Tizfiz is a granddaughter of 1986 Coronado Stakes winner Evil Elaine and therefore closely related to a memorable champion in Favorite Trick. A mere $32,000 yearling, Favorite Trick swept through his juvenile season in 1997 unbeaten in eight starts for trainer Patrick Byrne, rattling off scores in five Graded stakes events along the way including the Grade 1 Hopeful Stakes and Breeders’ Cup Juvenile, the latter by close to six lengths. Such was his dominance that he was named Horse of the Year, thereby becoming the first juvenile to land the accolade since Secretariat 25 years before.

Favorite Trick wasn’t quite the same force as a three-year-old, although he did rebound to win the Grade 2 Jim Dandy Stakes and Keeneland Breeders’ Cup Mile Stakes after failing to fire in the Kentucky Derby. Sadly, the son of Phone Trick was a moderate stallion and was standing for only $4,000 in New Mexico at the time of his death in a barn fire in 2006.

In the meantime, Evil Elaine’s stock had naturally risen – in 2003, the Coolmore partners paid $2.4 million for her Unbridled filly, later named Legs Lawlor and a winner at Leopardstown for Aidan O’Brien – and several of her more expensively produced later daughters have duly kept the family momentum going.

They include her final foal Unenchantedevening, whose daughter Moonshine Memories captured the Grade 1 Del Mar Debutante and Chandelier Stakes for the Coolmore partners and Bridlewood Farm partnership in 2017.

Over two decades has passed since Favorite Trick captured the imagination of American racegoers. Now Tiz The Law is doing the same yet against a very different backdrop.

There is a long time to go now until the 2020 running of the Kentucky Derby and who knows what the world will look like come September. But with any luck, Tiz The Law will be there at Churchill Downs to engage a sporting audience alongside a number of his talented contemporaries. 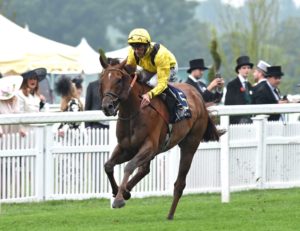 Up Next
Bourtai family back in the limelight