Three-year-old took home the 65th running of the Arima Kinen and as well as highlighting the achievements of her dam, shone a light on her sire Bago

After foaling a series of minor but high-earning winners, 17-year-old Chronologist has leapt to stardom in Japan as the dam of two of the year’s most popular performers in Normcore and Chrono Genesis.

Two weeks ago at Sha Tin, Normcore struck a winning blow for Japan in the Longines Hong Kong Cup. Then on Sunday, it was the turn of her younger half-sister Chrono Genesis to shine at Nakayama with a victory in the Arima Kinen, an iconic event on the Japanese racing calendar in which the runners are decided by a fan poll.

Although unable to match the depth of last month’s Japan Cup, the 65th Arima Kinen consisted of a typically competitive 16-strong field that included eight Group 1 winners, among them the popular Lucky Lilac and Fierement.

Yet it was Chrono Genesis, trained by Takashi Saito to run out the six-length winner of the Group 1 Takarazuka Kinen on her penultimate start, who was the crowd’s pick as the recipient of a record number of 214,742 ballots. Such faith wasn’t misplaced; launched for her winning run down the centre of the track by jockey Yuichi Kitamura, Chrono Genesis doggedly ran down Fierement before holding off the late flourish of Salacia to hand her owner, Sunday Racing Co., Ltd, a record fifth win in the race.

In fact, it ended up being a momentous result for Sunday Racing, given that their colours were also carried by Fierement and the fourth home Lucky Lilac. Each were bred under the Northern Farm umbrella – as were the top five finishers overall.

Two such major Group 1 wins with two individual daughters within the space of a month places Chronologist in exalted company. The breakthrough has also come later in life; Normcore and Chrono Genesis are the seventh and eighth foals bred by Katsumi Yoshida’s Northern Farm out of the Kurofune mare and follow a sextet of winners by Jungle Pocket, Meisho Samson, War Emblem, Tanino Gimlet and Harbinger. Several, however, were smart, notably the Meisho Samson filly Happiness Dancer, who won five races and close to the equivalent of $800,000.

What is heartening is the fact that Normcore and Chrono Genesis are daughters of Harbinger and Bago, two excellent European middle-distance performers who were sold at the conclusion of their racing careers to stand in Japan.

Middle-distance talent is celebrated in Japan. Moreover, rarely will high end breeders embrace a horse who retires after two seasons of racing.

Instead, a long career is desirable – and all the better if it includes a notable performance over extended distances. For an example, look no further than Deep Impact, whose Group 1 victories ranged from the Satsuki Sho (Japanese 2,000 Guineas) over 10f to the Tenno Sho (Spring) over two miles.

By contrast, plenty within our own industry would rather cluster behind a series of cheap Group 3-winning sprinters rather than a Derby winner. 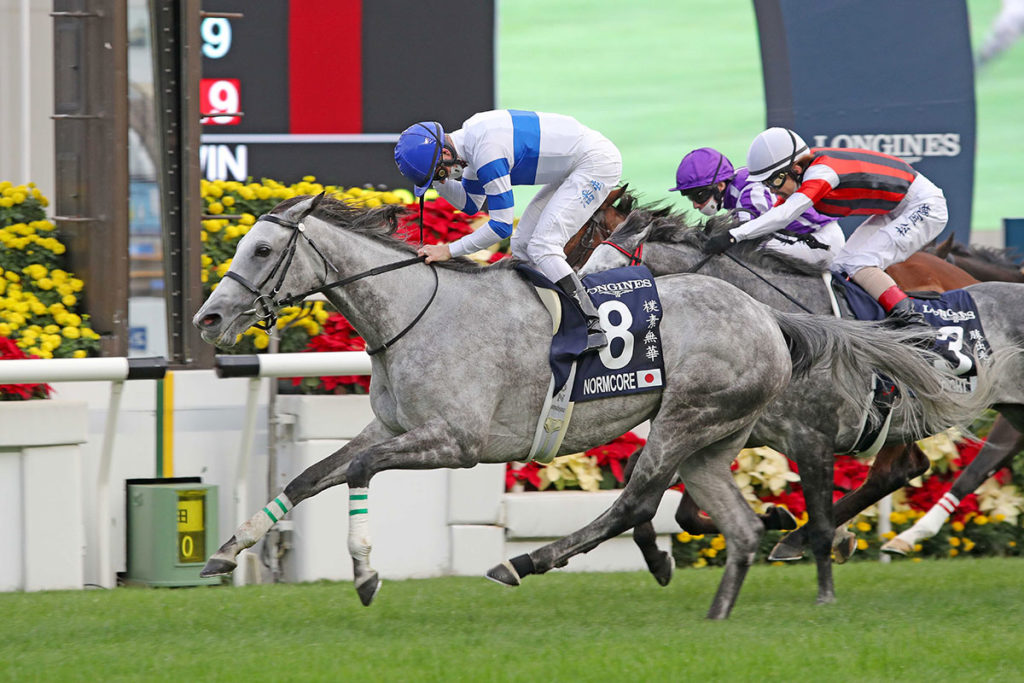 It’s fair to assume that neither Harbinger or Bago would have received the level of support that they have gone on to receive in Japan.

Harbinger was sold to stand at the Shadai Stallion Station in September 2010 following his 11-length romp in the King George. European studs had reportedly made a play for the horse, then regarded as the best four-year-old to grace Europe since Alleged 32 years before, but they fell short of the bid submitted by the Yoshida’s Shadai Group.

Harbinger, a strapping son of Dansili, was immediately embraced by Japanese breeders, covering 211 mares in his first season and another 222 in his second. Such numbers naturally came in handy and were a driving force behind his place as Japan’s leading first-crop sire by earnings in 2014.

Even so, it took until his third crop for a Group 1 winner to emerge. Patience was required but today, thanks to the likes of Normcore, Deirdre, who won the respect of European racegoers with a memorable victory in last year’s Nassau Stakes, champion Blast Onepiece and top milers Persian Knight and Mozu Katchan, he remains as one of the highlights of the Shadai roster, his popularity further enhanced by his ability to complement Sunday Silence blood so effectively.

Harbinger’s books have never dropped below the 100-mark in ten seasons. However, the stud career of Chrono Genesis’s sire Bago has not benefitted from such stability.

A Nashwan half-brother to Maxios from the Niarchos’ outstanding Coup De Genie family, there was an air of invincibility about Bago during his early career for Jonathan Pease.

An unbeaten juvenile campaign capped by a six-length win in the Criterium International preceded wins in the Prix Jean Prat and Grand Prix de Paris at three. Some of the gloss was knocked off by defeats in the Juddmonte International and Prix Niel but with those mid-season blips behind him, he went on to confirm that earlier superiority by capturing the Arc on his seasonal finale, putting in a sustained run under Thierry Gillet to mow down Cherry Mix with the likes of Ouija Board and North Light in behind.

That victory sealed Bago’s place as Europe’s champion three-year-old of 2004, and kept in training, he went on to add the Prix Ganay before rattling off placings in the Tattersalls Gold Cup, Grand Prix de Saint-Cloud, King George, Arc and Breeders’ Cup Turf. 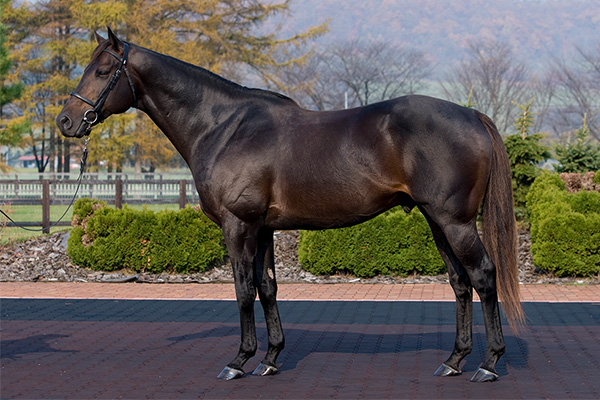 Described as a ‘big, leggy horse’, Bago was an admirably consistent Group 1 performer over 1m2f to 1m4f. He stayed further than many of his illustrious relations – Machiavellian, Coup De Folie and Denebola were exceptional at up to a mile – and for that, the influence of Nashwan can be attributed. All in all, it’s not hard to fathom how he became the target of Japanese interest.

Bago was purchased to join the roster at the JBBA Shizunai Stallion Station for the 2006 season. He hasn’t been wildly successful, as a current fee of 500,000yen (£3,600) suggests, but then in 12 crops of racing age, he has had only one three-figure crop to represent him. In 2017, his crop size even dropped to 12.

Of his 11 stakes winners, Chrono Genesis is by far the best and one of two Group 1 winners alongside the 2010 Kikuka Sho (Japanese St Leger) winner Big Week, a member of Bago’s first crop. Perhaps they will be joined in due course by Stella Veloce, one of the leading lights of the Japanese two-year-old division who ran second in the Group 1 Asahi Hai Futurity earlier this month.

That Normcore, who also won last year’s Group 1 Victoria Mile, and Chrono Genesis sit among the best produced by their sires naturally reflects extremely well on Chronologist. Both fillies carry the grey coat of Chronologist’s sire Kurofune, who was in the news only last month as the sire of the Group 1 Hanshin Juvenile Fillies heroine Sodashi.

“Of Bago’s 11 stakes winners, Chrono Genesis is by far the best”

Winner of the 2001 Japan Cup Dirt, Kurofune has been a grand servant for Shadai as the sire of 35 stakes winners. Now a pensioned resident of the farm, the son of French Deputy is also the damsire of 19 stakes winners although so far, Chronologist is his only Group 1-producing daughter.

Chronologist made just two starts but they included a winning debut at Chukyo. She is a half-sister to five winners and out of In This Unison, an unraced Sunday Silence sister to the 1999 Japanese 1,000 Guineas runner-up Fusaichi Airedale. In turn, she produced champion two-year-old Fusaichi Richard to Kurofune. As such, Chronologist and Fusaichi Richard are bred along very similar lines to each other.

Now rising 18-years-old, Chronologist has a yearling filly from the first crop of Drefong to run for her in 2021. She also has a filly foal by Maurice and in 2020 was among the first book covered by Japanese Derby winner Rey d’Oro.

The good news is that Chrono Genesis looks likely to stay in training for 2021. Her trainer Takashi Saito is already eyeing a potential clash with Contrail and Daring Tact but regardless of whether she manages to lower either of those Triple Crown winners, she is already well established as one of the nation’s most popular horses.

Indeed, with Stella Veloce also a strong possibility to take high order among the three-year-olds, then 2021 could well become a landmark season for Bago in his 20th year. 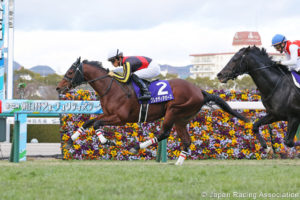