Roughly five years ago in this column, I ventured the opinion that – just as Britain and America have been described as two countries divided by a common language – the two countries’ racing industries have become divided by a common breed. “They may all be thoroughbreds,” I wrote, “but this divide is fuelled by the different surfaces largely employed by the opposing industries.”

So, has the situation changed substantially in the interim, at a time when turf racing has been staging something of a comeback in the States? Well, judging by the sires of last year’s American Grade 1 juvenile winners and 2019’s leading first-crop sires, I don’t think there is going to be a great deal of change to the status quo in the immediate future.

Fortunately, though, there is one star who promises to transcend the two industries’ insularity – the 2015 Triple Crown winner American Pharoah, who landed the title of champion North American first-crop sire.

But let’s start with some facts. The US staged 15 Grade 1 races for two-year-olds. The seven races for colts and geldings fell to sons of Empire Maker, Street Sense, Ghostzapper, Court Vision, Constitution, Palace Malice and Liam’s Map. The last three respectively finished second, third and fourth behind American Pharoah on the first-crop sires’ table.

Liam’s Map also supplied Wicked Whisper, one of the five fillies which collectively took the eight Grade 1 races for their sex. The other Grade 1-winning fillies were Bast, a triple Grade 1 winner by Uncle Mo, British Idiom, a dual Grade 1 winner by Flashback, Sharing, a daughter of Speightstown, and Perfect Alibi, by Sky Mesa.

There are, of course, some familiar names among the above stallions, which include a 22-year-old in Speightstown, three 20-year-olds in Empire Maker, who died in January, Ghostzapper and Sky Mesa, and a 16-year-old in Street Sense.

Bearing in mind that these five never raced on turf, despite making a total of 54 starts, I suppose we shouldn’t be too surprised that they have generally made little impact with their European-raced offspring, the main exception being Speightstown.

This sire of the Grade 1 Breeders’ Cup Juvenile Fillies Turf winner Sharing also enjoyed Group 1 success in France with Lord Shanakill, and he also has several other European Group winners.

However, Empire Maker failed to hit the Group 1 target in Europe, despite being given every chance by Juddmonte’s turf-dominated broodmare band. The best he could do was to sire a Group 2 winner (Brooch) and a Group 3 winner (Charity Belle). Ghostzapper, for his part, has only a Group 3 winner in Italy, while Street Sense has nothing better than a pair of Listed winners.

Sky Mesa hasn’t sired a single European black-type winner, but – as always when assessing American dirt stallions – it must be remembered that he hasn’t been given a huge chance of doing so. He is credited with having 11 runners in Britain, five in France, four in Ireland and two in Italy, with just five of the 22 winning. Ghostzapper has also had scant representation, with six runners in Britain, five in Ireland, five in France and one in Italy.

The one stallion with turf form among the older stallions with a Grade 1-winning American juvenile was Court Vision, whose five Grade 1 turf successes included the Breeders’ Cup Mile. He was also a Grade 2 winner on dirt, though, and was by a champion dirt performer in Gulch, so his achievement in siring the Breeders’ Cup Juvenile winner Storm The Court isn’t too unpredictable – except for the fact Court Vision is now based in Louisiana and stands at $3,500.

Do any of the younger stallions among the sires of Grade 1-winning two-year-olds have the potential to make a bigger impact in Europe? The 12-year-old Uncle Mo is still young enough to do so, but this sire of Bast – already a Grade 2 winner in 2020 – raced exclusively on dirt.

As he’s based at Ashford Stud, one might have expected the Coolmore team to test his progeny in Europe, but he has so far had only a handful of representatives in Europe, with the useful miler Corrosive among them.

While the disappointing record of his Australian progeny must count against Uncle Mo as a turf sire, it mustn’t be forgotten that he has sired several Graded stakes winners on turf in the US, including two winners – Mo Town and Mo Forza – of the Grade 1 Hollywood Derby on turf, with Mo Forza being one of the three finalists for the 2019 Eclipse Award for turf male.

Tapit, a three-time champion sire in the States, is another who has failed to convince non-Americans that he is as effective as a sire of turf performers, even though he owes more than 20% of his earnings to his turf runners.

He has had 17 runners in Britain, 13 in France and six in Ireland, with only one black-type winner – Wissahickon – among the 36. I could add that Tapit shares the same sire, A.P. Indy’s son Pulpit, as the aforementioned Sky Mesa, who has cut little ice in Europe.

Interestingly, two of the young stallions with Grade 1-winning juveniles – Flashback and Constitution – are sons of Tapit (as is Tapiture, who finished fifth on the first-crop sires’ table, three places below Constitution).

Flashback, the sire of Eclipse Award nominee British Idiom in his second crop, isn’t likely to enter European considerations, not least because he is now based in Pennsylvania, where he covered only 22 mares in 2019. He is priced at a mere $3,500, having started out at $7,500 at Hill ‘n’ Dale Farms in Kentucky. 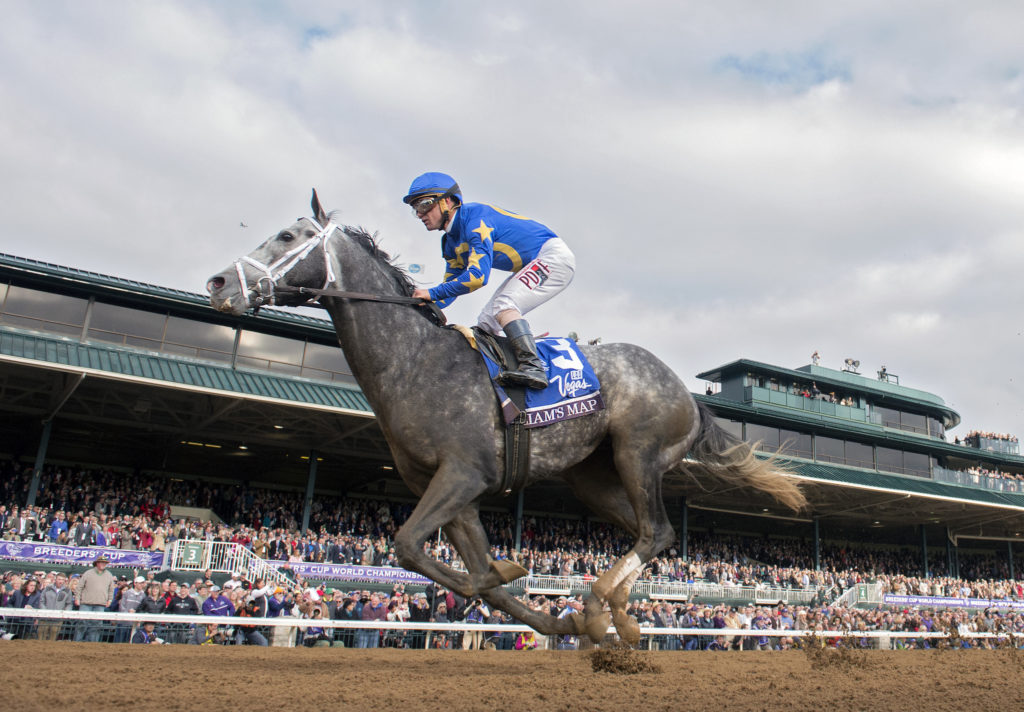 WinStar Farm’s Constitution stands a much better chance of long-term success, even though this winner of the Grade 1 Florida Derby and Donn Handicap has experienced the fall in demand which affects most young stallions in the US.

It isn’t an exaggeration to say that the start made by Constitution is reminiscent of the way Tapit started out, taking the 2008 title of leading first-crop sire with help from two Graded stakes winners.

In addition to siring the Grade 1 Champagne Stakes winner Tiz The Law, Constitution had three other Graded stakes winners among his five black-type winners, namely the Grade 2 winner Amalfi Sunrise and Grade 3 winners By Your Side and Independence Hall.

He also has the Grade 1-placed Gouverneur Morris and two other Graded-placed youngsters. While two of the Graded-placings came on turf, I suspect European buyers will need more encouragement than that before they invest heavily in Constitution.

Palace Malice is another successful first-crop sire with some talented turf performers already to his credit, headed by the Breeders’ Cup Juvenile Turf winner Structor and the Grade 2-placed stakes winner Crystalle.

But Palace Malice is a Classic-winning dirt runner by another Classic-winning dirt runner in Curlin. Even though Curlin was second in the Grade 1 Man o’War Stakes on his only appearance on turf, he has largely been given a wide berth by Europeans, his involvement being limited to six runners in Britain, one in Ireland, two in France, four in Germany and two in Italy. None has so far won at black-type level.

Palace Malice won the Belmont Stakes over a mile and a half before dropping back very successfully to shorter distances at four, when his wins included the Grade 1 Metropolitan Handicap. Even so, he is another who has experienced diminished support.

After a first book of 158, the figures have been 117, 65 and 91. It will be interesting to see whether this phenomenon of dwindling support will be at least partly halted if the American Jockey Club’s drive to restrict books to 140 mares comes into effect.

The Lane’s End-based Liam’s Map has been more immune than most to such fluctuations, with his first four books standing at 148, 157, 114 and 133. This is good news, as this winner of the Grade 1 Woodward Stakes and Breeders’ Cup Dirt Mile has made an impressive start, with the Grade 1 Hopeful Stakes winner Basin and Grade 1 Frizette Stakes heroine Wicked Whisper.

Bearing in mind that Liam’s Map didn’t race at two and didn’t become a Graded stakes winner until he was four, there is every reason to hope that he will build on this bright start. But will he appeal to Europeans? I rather doubt it, as he is a dirt horse by Unbridled’s Song, who failed to sire any black-type winners in Europe.

Unbridled’s Song, like Empire Maker, was a son of the Kentucky Derby and Breeders’ Cup Classic winner Unbridled, who also ranks as the broodmare sire of Tapit, so Unbridled has been a common denominator among three important stallions who appear not to suit European turf.

This was one of the reasons why I wondered whether American Pharoah’s progeny would thrive in Europe, even taking into account the fact that Unbridled is pushed all the way back in the fourth generation of the Triple Crown winner’s progeny, via his sire Pioneerof The Nile and grandsire Empire Maker.

Perhaps Unbridled’s influence has been nullified by the presence in the same generation of Storm Cat, whose lengthy list of top European winners featured the multiple Group 1 scorers Giant’s Causeway, One Cool Cat, Aljabr, Nebraska Tornado and Black Minnaloushe.

“Horses as outstanding as American Pharoah rarely fail as stallions”

Maven’s Group 3 Prix du Bois success and Monarch Of Egypt’s second in the Group 1 Phoenix Stakes seem to suggest that there will be no frontiers to American Pharoah’s success.

The Coolmore partners own another fine prospect by him in Ocean Atlantique, an eight-length maiden race winner at Saint-Cloud for Andre Fabre in October, while Godolphin has quite a useful colt in Saqqara King.

There is also no getting away from the wholesale turf successes of American Pharoah’s first-crop runners in the States, with his number of turf winners in the US already extending to double figures. Four Wheel Drive won the Breeders’ Cup Juvenile Turf Sprint and Sweet Melania landed the Grade 2 Jessamine Stakes prior to her second in the Breeders’ Cup Juvenile Fillies Turf.

The turf stakes winner Another Miracle was Grade 2-placed on turf while Princesa Caroline was Grade 3-placed.

Perhaps American Pharoah’s pedigree is going to prove less important than his most important assets; his toughness and his undoubted class, which made him a champion both at two and three.

Remember, Timeform rated him 138 as a three-year-old, compared to the 129 allocated to the 2018 Triple Crown winner Justify. Horses as outstanding as American Pharoah rarely fail as stallions. 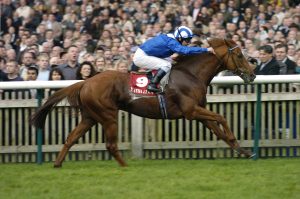