Challenging year ahead with income squeezed

It has been great to have horseracing back up and running in Britain and being shown live on our television screens since the beginning of June. The BHA and members of the Resumption of Racing Group, who did the groundwork, along with the racecourses and all those involved in making sure the sport has been run Covid-free should be congratulated.

It was extremely fortunate that the Levy Board had built up substantial reserves before the coronavirus crisis began and helpful that the resumption of racing enabled the payment of racecourse media rights to get back on track.

The current situation is that funding from the Levy Board has been secured at increased levels from the beginning of this month, while some racecourse executive contributions have been reinstated and a programme has been devised that looks reasonably familiar until the end of 2020.

However, looking ahead, 2021 is likely to be difficult for the whole country and this is likely to be reflected in reduced ownership levels and racecourse income throughout the year.

It is generally accepted that British racing suffers from under-funding when compared with many overseas competitors. That said, there is now a real opportunity for the government to ensure a much-needed injection of money under the levy system by bringing bets placed in the UK on horseracing from abroad into the levy net. This would come at no cost to the government and would align us with the government tax regime and the situation in every other major racing nation.

The whole industry should get behind this request to government to help it through this crisis.

Of course, we would like to make further adjustments to the levy system, moving to a hybrid or possible turnover basis, or even a reversion to the originally proposed data-based levy, but these should be considered as long-term aims, to be taken up when the industry can properly engage with government and, perhaps more pertinently, there is parliamentary time. In the short term, the industry needs help now.

A recovery plan for British racing that reflects the current expected income in 2021 will be challenging. Without an extra boost to the levy, and with much of the Levy Board’s reserves used up in 2020, as its Chairman has already said, the amount of support in 2021 cannot and will not be sustained even at this year’s levels.

It should also be remembered that a recovery plan needs horses, a word that is singularly lacking from the extensive list of actions now being proposed, and while if – and that is a big if – we have enough owners, the big question remains.

Will there be sufficient horses in the pipeline to sustain even the current racing programme? The inevitable downturn in breeding will be felt in a few years’ time, and history shows that such a downturn takes many years to redress with a recovery.

The racing industry as we have known it is not going to be the same for some years to come. Whatever happens within the sport itself, the squeeze on the wider economy is likely to lead to fewer owners, fewer breeders and less racing, with possibly fewer racecourses. As much as possible must be done to ensure that owners, who pay for the purchase and keep of horses, and those who breed them are maintained at the highest possible level.

Any five-year plan has to send a message of support and hope to breeders large and small. They need to know that when the results of their matings in 2021 appear at the sales or on a racecourse, there will be a suitably aspirational and well-funded programme for them to be wanted commercially, or if they campaign as owner-breeders, they are rewarded for success via bonus schemes or prize-money.

This message needs to be relayed by the whole industry and has to be conveyed well before the end of 2020.

A signal that the whole of British racing supports British breeders, and needs them to sustain a level of production that allows the rest of the sport to fulfil its aspirations, is going to be essential in ensuring that supply of horses as we move forward. 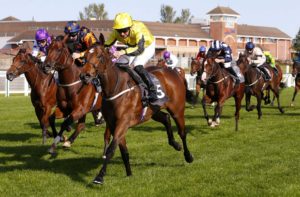 Up Next
Firth of Clyde Stakes hands Kodiac landmark victory