A love that dare not speak its name
Exclusive Columns

Pentire’s presence a boon for NZ 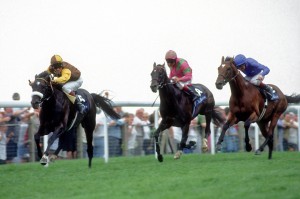 Conduit and Harbinger, the last two winners of the King George VI and Queen Elizabeth Stakes, have renewed a trend for winners of Ascot’s middle-distance championship to head to Japan for their stallion careers.

Although Montjeu, Galileo, Azamour, Hurricane Run, Dylan Thomas and Duke Of Marmalade are all safely ensconced in Ireland, there was a time when the European industry often failed to hang on to its winners of this premier event. Dancing Brave, Generous and Lammtarra were sent to Japan after starting their careers in Newmarket, and Opera House, Pentire and Alamshar all headed directly to the Far East.

Pentire left for Shadai Stallion Station at the end of 1996, after a career which had seen the son of Be My Guest win eight of his 18 starts. The highlights of his three-year-old season included an easy victory over the future St Leger winner Classic Cliche in the King Edward VII Stakes, a game defeat of Singspiel in the Great Voltigeur and a victory over the future Arc runner-up Freedom Cry in the Irish Champion Stakes. Then, at four, his finishing speed proved too much for Classic Cliche and Shaamit in the King George.

Pentire was bred well enough to win a Derby. His dam, the Ribblesdale winner Gull Nook, was by a Derby winner, Mill Reef, and his second dam, Bempton, was by another in Blakeney. What’s more, Bempton was a half-sister to one of Mill Reef’s Derby winners, Shirley Heights, so there is no fault to be found with Pentire’s bloodlines.

However, he ultimately failed to meet Shadai’s very high standards. Although he had a Japanese St Leger second in his first crop and the Group winners Meiner Amundsen, Craft Work, One More Chatter and Meiner Dupre in his next three crops, his main success has come from the years he has spent in New Zealand.

“These southern hemisphere seasons have yielded as many as ten Group 1 winners, including
two in 2011”

These southern hemisphere seasons have yielded as many as ten Group 1 winners, including two in 2011. At the beginning of April the six-year-old gelding Rangirangdoo added the Group 1 George Ryder Stakes in Australia to his earlier success in the Doncaster Handicap. Rangirangdoo has gained all his five Group successes from six furlongs to a mile, and speed has also been the main asset of Mufhasa, Pentire’s other top-level winner of 2011. His previous Group 1 winners include Zarita (South Australian Derby and Australasian Oaks), Xcellent (New Zealand Derby), Pantani (South Australian Derby) and Markus Maximus (West Australian Derby).

Pentire’s name has also featured in connection with another top-class galloper,
as his daughter Pentamerous is the dam of Shoot Out, the High Chaparral gelding who landed the Randwick Guineas and AJC Derby in 2010.

It is always tempting to wonder whether a stallion would have fared better in a different environment. Would Pentire, for example, have become an important stallion had he stayed in Britain or Ireland? I suspect not.

He spent several seasons in Germany in the mid-2000s, but sired nothing better than a handful of Listed winners in Germany, plus a couple more in the Czech Republic and Slovakia. There is also Be My Guest’s overall record as a sire of sires to take into account.
His sons Assert, Most Welcome, Pelder, Anfield, Double Bed and What A Guest all sired northern hemisphere Grade/Group 1 winners, with Most Welcome achieving a respectable total of three. Also Astronef, Charmer and Go And Go all sired Group winners. However, none of these sons could be described as a runaway success.

Monsun a potential alternative to Sadler’s Wells for NH breeders 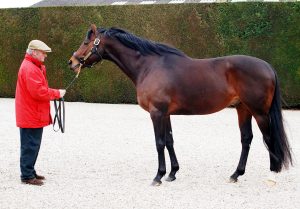 There’s a strong possibility that Monsun could be the next big name in National Hunt breeding. Two of his best sons are currently covering their first mares at leading National Hunt studs, with Schiaparelli starting out alongside Kayf Tara at Overbury Stud and Getaway making his debut under the Coolmore banner.

Breeders can draw encouragement from the exploits of Network, another son of Monsun based at the Haras National. A Group 2 winner over 11 furlongs in Germany, Network is now responsible for Rubi Ball, the leading five-year-old jumper in France. Over the last year Rubi Ball has won the Prix La Haye Jousselin, Prix Georges Courtois and the Prix Toytown.

Network’s progeny have also underlined their potential in Britain and Ireland. Rubi Light finished third behind Albertas Run in the Festival Chase and Sprinter Sacre filled the same position behind Al Ferof in the Supreme Novices’ Hurdle.

Another of Monsun’s French-based sons, the 2006 Derby Italiano winner Gentlewave, has his first three-year-olds running in 2011 and he has made a bright start, with his son Genzy impressing at Saint-Cloud at the end of March.

Monsun has been an exceptional servant to German breeding, but he is a great-grandson of the Irish stallion Tamerlane, whose sons Tiger, Boreen, Cassim and Tycoon II made an impact on the jumping scene in the 1970s and 1980s.

It was Tiger who sired the brilliant but ill-fated chaser Killiney and it was a Tamerlane mare who produced Grittar, the Grand National winner.

Jet is truly the master in South Africa

The award for the finest performance, from a breeding viewpoint, at the Dubai World Cup meeting undoubtedly should go to Darara. For the second successive year she supplied the winner of the richly endowed Dubai Sheema Classic, with Rewilding easily following in the footsteps of his half-sister Dar Re Mi.

This would be remarkable enough, but the daughter of Top Ville was 22 when she foaled Dar Re Mi and 24 when she produced Rewilding. I suspect it will be a long time before we see something comparable from any other veteran mares.

On the score of stallions, the honours probably went to the South African stallion Jet Master, who was responsible for two of the top ten earners during the winter in the UAE, thanks to the efforts of the mare River Jetez and the gelding J J The Jet Plane. The mare won the Group 2 Balanchine Stakes prior to excelling herself when second to Presvis in the Dubai Duty Free, and her three starts earned her the equivalent of around £730,000. J J The Jet Plane also collected considerable earnings in recording a handicap success and in winning the Al Quoz Sprint for a second time.

Jet Master has also been hitting the headlines in his native South Africa and at April 3 he held top position on the leading sires’ list. He owed his lead partly to the successes of his daughter Ebony Flyer in the Cape Fillies Guineas and of his son Past Master in the J & B Met. Past Master’s success means that Jet Master has achieved the remarkable feat of siring the winner of this very prestigious race in each of the last five years, thanks to Horse of the Year Pocket Power in 2007, 2008 and 2009 and to Pocket Power’s sister River Jetez in 2010. These victories have paved the way for four consecutive sires’ championships, with a fifth looking imminent.

Jet Master was born in 1994, a son of the royally-bred Rakeen. One of the last sons of Northern Dancer, Rakeen was a half-brother to Rahy and Singspiel and wasn’t seen out until late in his three-year-old season, when he scored at Wolverhampton and Doncaster for John Gosden. He proved a good buy for South Africa, scoring at Grade 2 and Grade 3 levels at around a mile and a quarter in his new home, and finishing third to Flaming Rock and Al Mufti in the important Rothmans July. Jet Master was his most successful representative, notching up eight Grade 1 successes from five furlongs to a mile during his 16-race career. He was named Horse of the Year for 1999/2000.

Jet Master has some distinguished bloodlines. In addition to being by a son of Northern Dancer, he is out of a mare by Rollins, a stallion whose sire was American Horse of the Year Damascus and whose dam Glorious Spring was a sister to the brilliant Roberto. He is inbred 4 x 4 to the influential Hail To Reason.

Of course, River Jetez and J J The Jet Plane are among an increasingly impressive number of horses acting as excellent ambassadors for the South African industry.

Up Next
A love that dare not speak its name