Welfare and movement of horses is Brexit battle
Exclusive Columns

With the breeding stock sales here, many breeders are starting their quest to find a potentially smart broodmare. Unfortunately – or should that be fortunately ­– virtually anything is possible.

The record books show that mares from just about every category are capable of enjoying their moment in the spotlight. It’s just that certain categories have a stronger chance of success.

Thanks to the American Jockey Club’s database and the Blood-Horse’s 2010 analysis of the produce records of more than 65,000 mares, we know a great deal about what a breeder should be looking for in the search for an ideal foundation mare. Ambitious breeders need to know that the mares responsible for the largest percentage of Group or Grade 1 winners (2.44%) were themselves winners at the highest level. The rightful order was maintained, with the second-highest percentage of Group/Grade 1 winners (1.84%) coming from Group/Grade 2-winning mares and the third-highest (1.36%) from Group/Grade 3 winners. The other category which performed well were the Graded-placed mares, whose figure of 1.32% was considerably higher than the 0.53% achieved by mares whose best achievement was to win at stakes level.

Of course only a very privileged few have the bottomless pockets required to secure these Group-winning mares. The fall in the pound since the Brexit vote also makes it much more difficult for British breeders to compete against the major international buyers from the Middle East, the USA, Japan and Australia, not to mention the Irish and the French.

So what strategies are open to the small breeder? Fortunately, there are exceptions to virtually every rule when it comes to breeding talented racehorses and it mustn’t be forgotten that, while the Graded/Group-winning mares were the most reliable sources of top-class winners, they were responsible for only 238 of the 1,366 Group/Grade 1 winners produced by the mares in the study. Obviously, this means that 1,128 did not have a major winner as its dam.

Recent seasons have provided some graphic examples of highly successful broodmares which were a long way removed from Group 1 standard.

So how was Faraday Light able to be transformed from disaster on the racecourse to classic producer? The answer is that her sire Rainbow Quest was a champion sire of broodmares

One, a Rainbow Quest mare called Faraday Light, ran twice as a three-year-old for Ballylinch Stud. On her first start she trailed in last of 16 at Gowran Park and on her second she was a tailed-off last of 22 at the Curragh. Ballylinch sold her a year later for only €26,000, in foal to resident stallion Traditionally. Faraday Light was to return to Ballylinch to make a couple of visits to Lawman, one of which resulted in Just The Judge. This winner of the Irish 1,000 Guineas and E.P. Taylor Stakes changed hands for 4,500,000gns as a four-year-old. While Just The Judge’s breeder didn’t profit greatly from the filly’s sale as a yearling, she later sold a Rip Van Winkle colt for €420,000. Faraday Light’s fortunes changed to such an extent that she visited the great Galileo in 2014, producing a filly that sold for 525,000gns.

So how was Faraday Light able to be transformed from disaster on the racecourse to classic producer? The answer is that her sire Rainbow Quest was a champion sire of broodmares, while her dam Uncharted Haven was a Grade 2 winner from the outstanding Mesopotamia female line.

Another perfect example is Galicuix, the Galileo mare who found fame as the dam of 2,000 Guineas hero Galileo Gold. Galicuix finished last of 12 at Sandown and last of ten at Salisbury on her only appearances, as a three-year-old in 2011. Her price at the 2013 December Sales was a mere 8,000gns, yet ­– less than three years later – she had become the dam of a winner of two of Europe’s most important mile races. Even allowing for the fact that Galicuix was sold before her half-brother Goldream had won two of Europe’s best five-furlong races, it is hard to believe there was so little interest in her. Not only is Galicuix by the extraordinary Galileo, but her second dam was a half-sister to Montjeu, one of the major classic influences of the new millennium. The lesson of this story is that a prospective buyer should not be deterred by a poor racing record if the filly’s bloodlines are strong enough.

Another example of this phenomenon is Mujarah, whose son Ribchester has proved himself one of Europe’s best milers over the last two seasons, with his victories in four Group 1 races, including the Prix Jacques le Marois, the Queen Anne and the Prix du Moulin.

A Shadwell homebred, Mujarah raced five times in maiden and handicap company but managed to reach the first nine only once. Timeform rated her no higher than 59, so it was understandable when the bidding ground to a halt at 18,000gns when she was consigned to the December Sales. It would be an understatement to say that her buyers got an awful lot of female line for that modest price. Her fourth dam is the blue hen Fall Aspen, a Grade 1 winner who founded a female line which has been responsible for nearly 30 Group/Graded winners, including the mighty Dubai Millennium. Mujarah’s second dam Mehthaaf and third dam Elle Seule both ranked among Fall Aspen’s Group-winning descendants, and so did Mujarah’s half-brother Tactic.

Major breeder culls
Buyers need to remember that the major owner-breeders, such as Shadwell, Juddmonte, Godolphin and the Aga Khan, cannot possibly retain all their homebred fillies, even when the fillies represent female lines which have taken years and years to develop. As the Aga Khan’s operation has to pay its way, he has never been afraid to balance the books by selling young fillies and the occasional proven mare.

In the space of a few months in 2016, sons of these three mares compiled an extraordinary sequence of major successes. Hazariya’s colt Harzand won the Derby and Irish Derby, Darkova’s son Almanzor took the Prix du Jockey-Club, Irish Champion Stakes and the Champion Stakes, while Lidana’s son Mont Ormel triumphed in the Grand Prix de Paris. All three highlighted the latent classic potential of the Aga’s wonderful families.

The Aga Khan’s 2017 Grand Prix de Paris winner Shakeel is out of Shamiyra, who was sold for €190,000 just months after she had produced her future Group 1 winner

It is worth mentioning that Hazariya was sold only after four of her daughters – the Listed winner Hazarafa, the Group-placed Haziyna, the Gr.3 winner Harasiya and the winner Hazaraba – had been added to the Aga’s broodmare band. Hazariya’s purchasers, Newsells Park Stud, decided the time was ripe to cash in on Harzand’s successes, especially when they had the mare’s daughters by Fastnet Rock and Dansili. Hazariya duly sold for 2,000,000gns at the 2016 December Sales.

The Aga Khan’s 2017 Grand Prix de Paris winner Shakeel is out of Shamiyra, who was sold for €190,000 just months after she had produced her future Group 1 winner.

Any breeder operating on a limited budget will have to compromise in one or more areas, whether it be pedigree, performance or conformation. If they are going to breed for the sales ring, it could be considered dangerous to compromise on conformation, but there are endless examples of mares with faults developing into highly successful mares. Juddmonte sold Demerger, a filly who dragged her left hind foot to the extent that she wasn’t trained. Her price was a mere 4,000gns, but she was to find fame as the dam of that outstanding sprinter Sole Power.

Green Room, another Juddmonte cast-off, had never gone into training because of complications with one of her feet. Sold for 20,000gns as a three-year-old, Green Room became one of those rare mares with two Group 1 winners to her credit, thanks to Lord Shanakill and Together Forever. Dissemble, another Juddmonte filly, was sold for only 3,000gns after failing to stand training. This half-sister to Hasili produced the top-class miler Leroidesanimaux, sire of the Kentucky Derby and Dubai World Cup winner Animal Kingdom.

Daughters of disappointing sires
I believe one way in which a buyer can obtain value is to buy daughters of disappointing stallions which started their careers at substantial fees. If the fee is sizeable, there is every chance that the visiting mares possessed deep pedigrees, and these deep pedigrees sometimes stand the daughters in good stead, even if they were unexceptional on the track. There is probably no better recent example than Dubai Destination, who was relegated to covering jumping mares, having earlier spent his first four seasons at fees of £25,000 or £20,000. Fillies from those crops have gone on to produce those international stars Golden Horn and Postponed, as well as Thunder Snow, Dutch Connection and The Juliet Rose.

Age is another consideration. Although the Blood-Horse study suggests that a mare’s best chances of producing Graded/Group winners lie with her early foals, there are plenty of exceptions to the rule. Sea Kalisi, the French-bred winner of the Grade 1 Beverly D Stakes in 2016, was foaled when her dam was 21 and so was that top-class miler Esoterique. The Prix Saint-Alary winner Jemayel was foaled when her dam was 19, whereas the dam of the Prix d’Ispahan winner A Shin Hikari was 17. This suggests there could still be mileage left in some of the older mares on offer at the sales, especially if they have already produced something worthwhile – or if they are in foal to a stallion which is likely to be popular a year or two ahead.

It’s worth remembering too that the major breeders cannot possibly retain all their daughters of the brilliant Galileo. This has to be good news for the smaller breeder, as the 11 Galileo mares which have produced northern hemisphere Group 1 winners include five which never won or never ran. Among them are the dams of La Cressonniere and Barney Roy, as well as Galileo Gold. 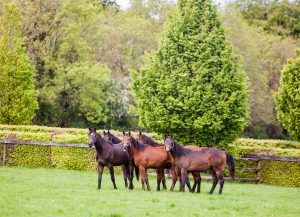 Up Next
Welfare and movement of horses is Brexit battle