As we head into autumn and the yearling sales season, breeders will look back at the mating decisions they made some three years previously and see how fashion has moved on and some stallions have come to the fore, while others have gone cold.

The route of least risk is to go for a first- or perhaps second-season stallion, who has not had time to show the ability to succeed or fail, and whose racing performances are still fresh in the mind. These stallions generally cover huge books of mares, and when they fail to be successful – as many do – they leave a large number of progeny who show moderate ability and do not contribute to the future of the breed.

We should be aware that sending large numbers of mares to new stallions, while relatively ignoring more proven performers, has its downside for the thoroughbred

We cannot change fashion or turn the tide created by the commercial world, but we should be aware that sending large numbers of mares to new stallions, while relatively ignoring more proven performers, has its downside for the thoroughbred. Equally, as breeders we have to be conscious of the race programme and fixture list that we are breeding to supply. Producing horses who fit into the increasing and changing fixture list and race programme makes absolute sense, but we should recognise the changes taking place.

The fixture list for 2018 was published in July, earlier than in many recent years, and once again it involved an increase in the number of all-weather meetings. It is clear that although the BHA sought extra Flat turf fixtures in the spring and autumn, the vast majority of racecourses do not feel that their tracks can stand more racing at that time of year, and so the calendar is close to saturation point with turf fixtures.

All-weather racing has no such concerns and although introduced in 1989 as an insurance policy against the abandonment of jumps fixtures, it is now an important part of our year-round programme. This year, four Group 3 and 17 Listed races are scheduled to be run on all-weather courses, but it cannot be long before more all-weather Pattern races are staged, especially in the autumn and early winter. Perhaps breeders should look more closely at using horses who excelled on artificial surfaces in Britain.

At the moment these surfaces are generally regarded as an adjunct to turf fixtures, with the horses being largely interchangeable. However, in time it will be firmly established that some thrive on such tracks, and even now the handicappers are able to show how some horses perform to noticeably different ratings in all-weather and turf races.

There are already claims that genes for ability to act on either turf or dirt can be identified, so why not a similar situation for Polytrack, Tapeta or Fibresand versus turf?

When at the TBA annual general meeting Chris McGrath raised the subject of breeders ignoring dirt stallions at their peril, he was referring to US track performances, presumably because all-weather racing in Britain is still regarded more for its lower-grade racing and convenience than as an integral part of the fixture list. It may only take one enterprising venture to put in a purpose-built all-weather track, with proper weatherproof facilities, staging better quality racing in the evenings to accommodate the online gambler, for breeders to realise that they have another, stand-alone racing programme to supply.

As more gambling goes online, the pressure to provide racing when punters are not at work in the seven to eight months that evening turf racing does not take place will increase. No sensible racecourse will floodlight a turf track that can take only a limited amount of racing, so inevitably artificial surfaces will have to provide for the demand.

Flat and National Hunt turf racing is the lifeblood of the sport in Britain and should always provide the highlights of the seasons, but we cannot ignore the ever-growing thirst for racing at a time which suits the online punter and on a guaranteed surface that is good for the welfare of the horse. The ability to perform well on artificial surfaces will become more and more important over time. 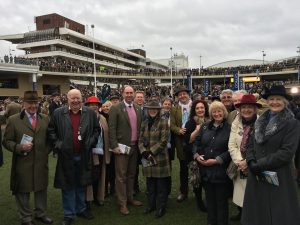 Up Next
Syndicates key to boosting owner levels