Great strides have been made in the understanding of skeletal issues in young horses, as Nancy Sexton discusses

We are all aware of the pros and cons of early and later-born foals. Older foals are going to find it easier to meet an early sale date and theoretically also possess an advantage in maturity over their younger contemporaries on the racecourse, particularly as two-year-olds. Yet studies have found that when it comes to percentages of stakes winners, very early foals tend to fall behind those born in February and March. And, of course, there is currently an excellent flagbearer for very young foals in the June 3-born Tuesday, the Oaks heroine who has filled the frame in four Classics this season.

A fascinating further insight into a foal’s early development and how it might affect performance was shared recently at the Saracen Horse Feeds Thoroughbred Growth Forum, at which Dr Joe Pagan of Kentucky Equine Research (KER) discussed the effect of size and growth on the incidence of Developmental Orthopedic Disease (DOD.) Using a set of growth records for young thoroughbreds that covered a pool of over 47,200 foals born in North America, Europe, Australia, New Zealand, Japan and India, KER has brought to light several factors that could well be utilised effectively by breeders. The talk, as well as that from vet Nick Wingfield Digby, is well worth a watch and can be found on Saracen’s YouTube channel.

Results correlating to birth weight and stakes winners were also outlined, notably that the vast majority of stakes winners had a birth weight between 44kg and 64kg. Similarly, those that fell between those parameters found greater favour at the sales; only three per cent of bigger foals – those heavier than 64kg at birth – born in the UK went on to feature among the top ten per cent of sales. However, in America, where the big, powerful, dirt horse drives the market, that figure rose to 12 per cent. And that played out on the racecourse, with the results clearly demonstrating that stakes winners are heavier as yearlings in the US than in the UK; the most successful UK-based group were those who had sat within the second quartile as yearlings (and therefore a more average size), while those who had been among the fourth quartile (therefore within the largest group) by body weight in the US were significantly more successful than their lighter counterparts.

When it comes to skeletal soundness, the study also raised several interesting points.

Osteochondrosis (OCD) is a developmental disease that affects the cartilage and bone in the joints, characterised by loose cartilage and/ or bone fragments. Conformation, hereditary issues, environment, nutrition and growth rate are all contributory factors but, unsurprisingly, the study revealed that taller and heavier foals (especially when young) are more susceptible to problems, especially in America.

Radiographic abnormalities are every consignor’s pre-sale fear, especially in the US where x-ray issues can significantly devalue a horse. Against that, there are countless examples of horses ‘failing the vet’ at a sale and going on to be a success.

Even so, it was highlighted that 37.5 per cent of those American-born horses who developed a stifle cyst – deemed one of the most serious problems – never made it to the track, compared to 22 per cent of those with no yearling skeletal issues.

The study also suggested that weight and height measurements taken within the first 30 days of life, when the bones are in the early stage of development, are the most relevant when it came to identifying potential issues. And particularly interesting was the fact that foals out of maiden mares had 30 per cent less total OCD than those out of multiparous mares. Again, body weight appeared to be a significant factor.

Birth date also seems to play its part in the OCD conundrum, especially in the UK where May foals exhibited a 22.4 per cent rate of OCD incidence compared to 7.5 per cent against those born in January. That in turn led to a higher rate of surgery for those born in May (12.1 per cent compared to 2.5 per cent for January-born foals), the majority of which was performed on the stifle.

One other point of interest was the fact that a greater incidence of OCD in the hock is seen in the US. However, hock OCD was shown to be not as detrimental to racecourse and sales performance as stifle OCD.

We never stop learning in this business but studies like this are invaluable for an eye to the future. If nothing else, they can certainly provide their shaire of pointers for breeders going forward. 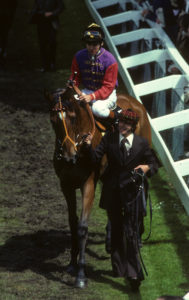 Up Next
Farewell to a mighty figurehead