With a robust season of yearling trading in the books, the attention of the American sales industry now turns to the breeding stock circuit, which kicks off on Tuesday in Lexington, Kentucky with an incredibly deep renewal of the Fasig-Tipton November Sale.

Fasig-Tipton’s flagship breeding stock auction is fondly known as the ‘Night of the Stars’, and with good reason. At very few other places will there be such a collection of Grade 1 runners and producers and this year is no different with over 40 such animals catalogued.

In fact, several of them will have shipped straight in from competing at the Breeders’ Cup meeting in California, notably a pair of victorious heroines in Belvoir Bay, who broke the track record in the Turf Sprint, and Blue Prize, who had the measure of Midnight Bisou in the Distaff.

The likes of Vasilika and Got Stormy (her weanling half-brother by Mohaymen also sells as lot 71), all of whom were placed in their respective Breeders’ Cup events, add further spice.

As such, few sales can boast such a buying base of international depth; indeed, buyers spent a total of $89,473,000 on stock at last year’s renewal for an average of $639,093. Among that total were 22 million-dollar lots led by the mighty Lady Aurelia, who was knocked down for $7.5 million to her part owner Stonestreet Thoroughbred Holdings LLC.

This year’s sale might not contain a lot of the international stature of Lady Aurelia while it has suffered with the late defection of Midnight Bisou, the dominant mare of the current season who was due to go under the hammer as lot 151 (her dam Diva Delite remains a highlight as lot 173).

However, it remains an exceptional catalogue in terms of both weanlings – a group that includes the first foals by champions Arrogate and Gun Runner – and breeding stock, some of whom are outlined below.

Although an older producer, Baffled is well proven at an elite level.

The 2007 Albany Stakes third commanded $3.5 million to Bridlewood Farm and Don Alberto Corporation when she last came under the hammer at this sale in 2016.

Such a figure reflected a stud record that included a Grade 1 winner in Florida Derby and Donn Handicap scorer Constitution, a high-class British juvenile in Superlative Stakes winner Boynton and Grade 3 winner Jacaranda.

Three years on and Constitution is one of America’s brightest first-crop sires thanks to the winners of over $1.5 million this season. The presence of Grade 1 Champagne Stakes winner Tiz The Law and Grade 1-placed Gouverneur Morris within his five stakes horses makes him the best sire son of Tapit to date and also suggests that he has the ability to become an important stallion as time goes on.

British-bred Belvoir Bay, a remarkable survivor of the San Luis Rey fire, covered 5f in a track record-breaking 54.83s on Saturday to make all for a memorable success in the Breeders’ Cup Turf Sprint at Santa Anita. As that performance showed, she is an exceptionally fast mare, one whose speed has carried her to 12 victories – in addition to Saturday’s win, they include the Grade 2 Monrovia Stakes while she was also second in the Al Quoz Sprint at Meydan earlier this year.

Belvoir Bay also pays immense credit to her late breeder Lennie Peacock, who bred the daughter of Equiano out of Path Of Peace, a half-sister to Cherry Hinton Stakes winner Please Sing.

An exceptional draft for Bluewater Sales also includes another lightning fast performer in Shamrock Rose (178). The daughter of First Dude banked close to $1 million during her lengthy career, one that was highlighted by a victory in last year’s Breeders’ Cup Filly & Mare Sprint.

In what promises to be a hot few minutes at Fasig-Tipton, Belvoir Bay will be followed not long after into the ring by Blue Prize, who claimed the scalp of Midnight Bisou in Saturday’s Breeders’ Cup Distaff.

This tough Argentine-bred has enjoyed a particularly productive autumn, having also defeated Elate when capturing her second straight renewal of the Grade 1 Spinster Stakes at Keeneland. Thus, she heads to auction as the winner of ten of her 23 starts for $2.7 million in prize-money.

By the Storm Cat stallion Pure Prize, Blue Prize is out of Argentine Group 2 winner Blues For Sale.

A rare opportunity to tap into a current Triple Crown bloodline.

Egyptian Storm is a half-sister to none other than Justify, last year’s unbeaten Triple Crown hero. There is also a nice symmetry in that this $230,000 yearling is also a daughter of Pioneerof The Nile, himself responsible for the other Triple Crown hero of the current era, American Pharoah.

Produced by the Grade 3-placed Stage Magic, Egyptian Storm is also a half-sister to Grade 3 winner The Lieutenant.

Hence assumed her share of column inches back in 2016 when selling for 2,100,000gns to MV Magnier, Mayfair and Peter and Ross Doyle at Book 1 of the Tattersalls October Sale.

Her sale came in the autumn of the career enjoyed by her outstanding sister Alice Springs, winner of the Falmouth, Matron and Sun Chariot Stakes for Aidan O’Brien. Another Galileo filly out of Aleagueoftheirown recently sold for €2.2 million to Westerberg at the Goffs Orby Sale.

As for Hence, she didn’t let the side down by running Group 3 and Listed-placed on four occasions.

Hence is one of 11 mares catalogued in foal to Justify. Others include multiple stakes producer Lastofthesummerwine (143), Grade 1-winning two-year-old Noted And Quoted (161) and Diva Delite (173), the dam of this season’s multiple Grade 1-winning filly Midnight Bisou.

Laffina represents a gilded opportunity to buy into a very current family as the dam of this year’s top Californian juvenile filly Bast.

The daughter of Uncle Mo – a rare beast in that she’s inbred 3×2 to Arch – was the authoritative winner of the Grade 1 Del Mar Debutante and Chandelier Stakes before running a fine third in Friday’s Breeders’ Cup Juvenile Fillies.

Laffina, who was purchased privately by Blackridge Stables after failing to sell for $290,000 at last year’s Keeneland November Sale, will be offered this time around alongside her weanling filly by Pioneerof The Nile (140). 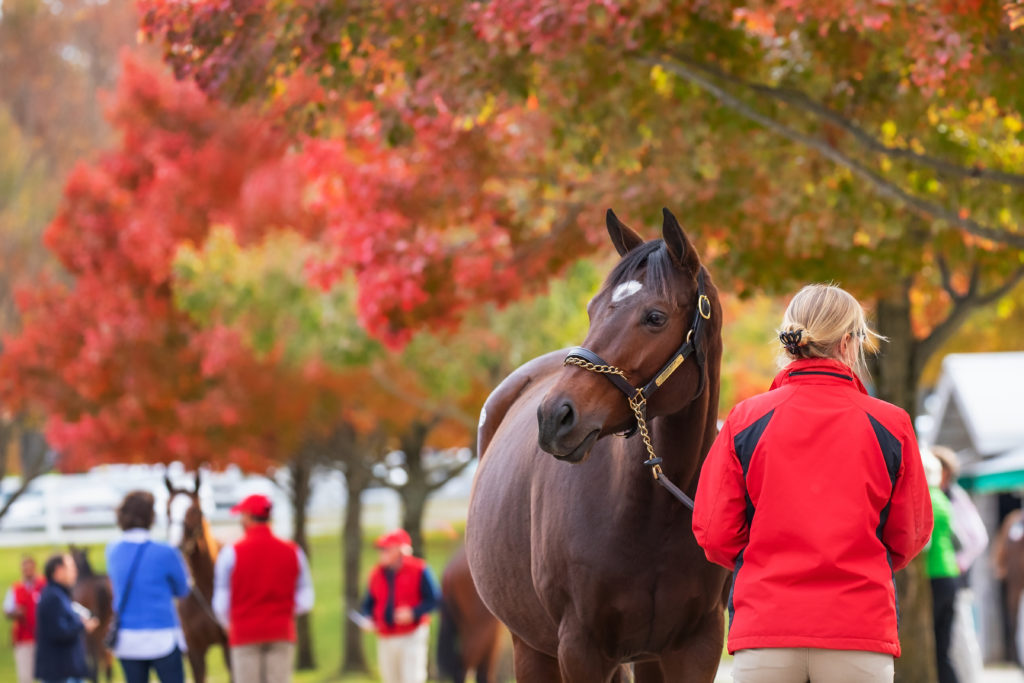 Fasig-Tipton’s one-day affair is followed by a marathon auction across town at Keeneland. Set to run from November 6 to 16, the sales house has catalogued a total of 4,546 horses over six books of selling.

As with any major sale, however, value can always be found, an example of which came to the fore only on Friday when Kameko ran out the easy winner of the Group 1 Vertem Futurity; his dam Sweeter Still was picked up for just $1,500 by Timothy Thompson at last year’s sale.

By contrast, below are five lots in Book 1 with the ability to light up the board and perhaps even hit seven figures.

An eventful 12 months for Lil Indy continues this week with an appearance at Keeneland alongside her filly by New Year’s Day, the only Korean-bred catalogued to the sale.

Lil Indy, a half-sister to multiple Grade 1 winner Flat Out, was sold at last year’s sale by Gary and Mary West to Korean interests for $11,000.

At the time, her two-year-old colt Maximum Security was still unraced – and indeed would go on to start off several weeks later in a $16,000 claimer. Since then, however, he has developed into one of the best colts of his generation as wins in the Grade 1 Florida Derby and Haskell Invitational attest. There was also that ‘win’ in the Kentucky Derby, in which he was sensationally disqualified.

By that stage, Lil Indy was back on American soil, having been sourced by SF Bloodstock. No doubt she will ring a bell this time around alongside her weanling filly foal, who is a sister to Maximum Security.

One of seven mares catalogued in foal to War Front, this mare has lit up Keeneland before, firstly on the track when successful in the 2017 Grade 1 Ashland Stakes and latterly when selling for $800,000 as a maiden to Town & Country Farms/Pollock Farms at this sale last year.

Making Sailor’s Valentine all the most interesting is that as a daughter of Mizzen Mast, she hails from the Caro sire line. Her pedigree also contains only one line of Northern Dancer, via her damsire Tale Of The Cat, making her easy enough to cross.

Other mares in foal to War Front include Betsy Ross, a Galileo sister to recent Leopardstown two-year-old winner Celestial Object who is out of top Australian sprinter Sea Siren (174).

The $6 million November sale-topper of 2015 when sold to John Sikura and Hill ’n’ Dale Equine, champion Take Charge Brandi returns to auction this week as part of the Elevage Dispersal. The mare will be sold in foal to Triple Crown hero Justify and alongside her third foal, a colt by Tapit (112).

The Elevage dispersal consists of 14 horses. In addition to Take Charge Brandi and her foal, they also include Grade 1 Las Virgenes Stakes winner Callback (186), a $2.8 million purchase in 2015 who sells alongside her colt foal by Medaglia d’Oro (187) and Drifting Cube (227), an Australian-bred half-sister to leading young Australian sire Rubick.

Back in November 2015, the hardy Take Charge Brandi had just wrapped up a career highlighted by Grade 1 victories in the Breeders’ Cup Juvenile Fillies and Starlet Stakes, and as such, had been crowned the champion two-year-old filly of her generation.

Since then, the mare has produced a colt by Curlin, who was bought by John Oxley for $850,000 as a yearling, and a pair of colts by Tapit. 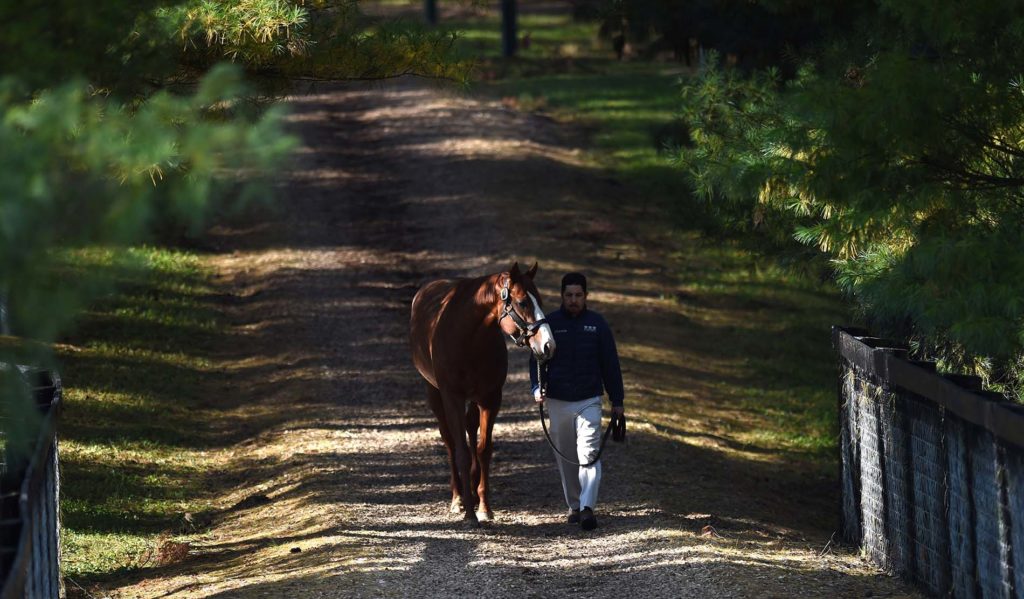 Take Charge Brandi is one of a number of mares offered in foal to Triple Crown hero Justify – Photo: George Selwyn

She is also a half-sister to this season’s top three-year-old Omaha Beach, winner of the Grade 1 Santa Anita Sprint Championship and second in the Breeders’ Cup Dirt Mile since the publication of the catalogue.

Take Charge Brandi is the highlight of a strong collection of mares catalogued at Keeneland believed to be in foal to Triple Crown hero Justify (she was also earlier covered by Tapit).

Others include Sotto Voce (91), the $2.7 million Keeneland September sale-topper who is a sister to Grade 1 winner Cupid, Minding’s sister Conquest (208) and Hourglass, a Galileo half-sister to Shamardal (256).

Firstly, she was a top-class performer whose seven wins included the Grade 1 Humana Distaff Stakes and Grade 3 Turnback The Alarm and Bed o’ Roses Handicaps.

Secondly, she is also a daughter of Bernardini, the damsire of 14 stakes winners already this year, and half-sister to Prix Vermeille heroine Mrs. Lindsay. In addition, her first foal Spice Is Nice, a two-year-old by Curlin, made $1.05 million as a yearling while Dame Dorothy herself is back in foal to leading young sire Uncle Mo.

This colt is one of the highlights of the weanling draft hailing from Eaton Sales alongside a Tapit sister to Belmont Stakes winner Tapwrit (161).

Bred by Capital Bloodstock, Lot 268 is a brother to the iconic Songbird. Rick Porter’s outstanding filly won over $4.6 million in prize-money and 13 of her 15 races, including the Breeders’ Cup Juvenile Fillies, Santa Anita Oaks and Alabama Stakes. She also fell only a nose short of Beholder in that memorable renewal of the 2016 Breeders’ Cup Distaff at Santa Anita.

Songbird went on to sell for $9.5 million at the 2017 Fasig-Tipton November Sale to Mandy Pope’s Whisper Hill Farm and now has a filly foal on the ground from the first crop of champion Arrogate.

Speaking of Arrogate, he is represented by three lots in Book 1, among them a half-brother to champion two-year-old Hansen (101). 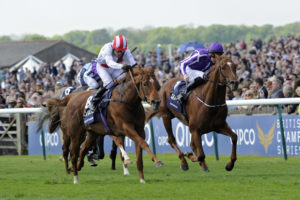 Up Next
Thunder makes lots of noise