Blessed by Noblesse even if our paths never crossed

While the Oaks winner missed the 1963 St Leger, Ragusa’s victory began another love affair for our writer

In the autumn of 1962, at the age of 18, I fell in love. The object of my devotion was anything but pretty by conventional standards. On the small side, and mostly lean of body, she nevertheless possessed a big rear end, which was probably key to her merit. Her name was Noblesse, and I idolised her.

I was nearing the end of my schooldays, with A-Levels already in the past. My week involved only three or four lessons – futile efforts to arm me with sufficient knowledge to obtain a pass at O-Level maths – and my numerous free periods, all unsupervised, were largely occupied by a study of racecourse form.

Years ago I had learnt all about Sceptre and Pretty Polly, winners of seven Classics between them at the dawn of the century. I was aware of the exploits of Sun Chariot and Meld, and had even followed the career of Petite Etoile. I wanted to believe that Noblesse belonged in the same class as those champion fillies of the past.

There were two items of evidence, the first a dominant display in the six-furlong Blue Seal Stakes at Ascot towards the end of September. The race was for two-year-olds who had not run at the time of closing, and seven of the 21 runners now had racecourse experience, one of them as a winner. Noblesse, backed from 2-1 to 11-8 in the ring, took command at the two-furlong pole and soon strode clear to win unchallenged by five lengths.

Paddy Prendergast, at that time the leading trainer on the Curragh, brought the filly back to England a month later to contest the Timeform Gold Cup, the richest race in Europe for the juvenile set, staged over a mile at Doncaster. This time she would have 11 rivals, several of them proven at a higher level than her.

Fellow Irish raider Partholon had won the National Stakes, Star Moss was the Royal Lodge hero, Portofino had landed the Somerville Tattersall on debut, and King Of Babylon had impressed when taking the Champagne Stakes. There was surely enough talent among that group to give Noblesse a proper test.

It did not turn out that way, and punters seemed to know what to expect. They backed the filly in from 7-4 to 11-10 and never had a moment’s anxiety. Noblesse needed no encouragement from the saddle to dart clear of her rivals inside the last furlong and win in a canter by three lengths. Though being eased before the finish, she equalled the course record to underline the merit of the performance.

Little could I have imagined that the next time Noblesse appeared on a racecourse, I would be writing about her professionally, and making her my nap selection for the Musidora Stakes in May 1963. There had been rumours that she had not thrived over the winter, but I ignored them, made her a 4-7 shot in my betting forecast and predicted an easy victory.

In fact, there seemed to have been genuine doubts over Noblesse’s readiness for her York assignment, as she drifted from 8-13 to start at even money. But the filly’s performance belied the market drift, as she proceeded to win as she liked by six lengths and reduce the Oaks to a foregone conclusion.

Epsom’s three headline events in my first season as a professional pundit all delivered outstanding displays, with Relko winning the Derby by six lengths, Exbury the Coronation Cup by six lengths, and Noblesse the Oaks by ten lengths. But I had been stuck in the office, unable to witness any of the action, as racing editor Leo McClean locked himself in the only room with a TV set, his company just a messenger, there to rush the results to the teleprinter operator.

Mac got a bit too excited over his long-priced each-way punt on third-placed Ragusa in the Derby, naming that colt as the winner, and the Press Association would have told the world the wrong result if a print-room employee who had listened to the race on a transistor radio hadn’t spotted the error.

I was now more in love with Noblesse than ever, and determined to see her in action on a future occasion. Her first scheduled target after Epsom was the King George VI and Queen Elizabeth Stakes, so I asked for Saturday, July 20 off and looked forward to the occasion, especially as we were led to believe that her Ascot opponents were likely to include both Relko and Exbury.

I remember that King George well, but I don’t remember it for Noblesse, Relko and Exbury, none of whom turned up. The colts were withdrawn at the second forfeit stage, defections which suggested that Noblesse would start as odds-on favourite, but ten days before the race she rapped a hock at exercise and had to go on the easy list for a couple of weeks. Maybe she could resume in the Yorkshire Oaks.

The night before the 1963 King George, Lester Piggott had ridden five of the six winners at Pontefract, and he promptly added wins in the first two races at Ascot, events that led to his big-race mount, Twilight Alley, starting as an unrealistic favourite. That massive four-year-old had made all the running to win the Gold Cup on his previous appearance, but it was asking a lot of him to display comparable form in the company of proven quality mile-and-a-half performers.

“I owe Ragusa for launching me on another love affair”

As it turned out, Twilight Alley broke down and was pulled up early in the straight. Miralgo, another four-year-old, made a valiant effort to lead all the way, but he was powerless to match the acceleration of Ragusa, the stable companion of Noblesse chosen to deputise for her.

I naturally felt short-changed by the absence of my heroine at Ascot, but later learnt that the Yorkshire Oaks was off her agenda, and that she would be prepared for the St Leger. I pleaded for Wednesday, September 11 off, obtained my release, and made plans for my first visit to Town Moor. At last I would get to meet Noblesse in the flesh.

But no such luck. Paddy Prendergast had an embarrassment of riches in his stable that year, and juggling options for the team that would make him 1963’s champion trainer was never a straightforward task. Noblesse was now to take the Prix Vermeille-Arc de Triomphe route, and I would have to be satisfied with super-sub Ragusa again at Doncaster.

I have vivid recall of that St Leger, the first Classic I’d attended, savouring the prospect as I, and thousands around me, strode down Bennetthorpe, emptying the town and heading for the racecourse. It was already assuming the impact of a major event in my life before I got to soak up the atmosphere where racegoers for close on two centuries had celebrated the world’s oldest Classic.

Sure, I was sorry to miss Noblesse again, but, as it turned out, the best of her was already history. She came back lame after finishing fourth in the Vermeille, and her career was over. I think I eventually got to see her, but I could never be sure, as she was identified to me as one of a group of mares at the far end of a paddock on Spendthrift Farm in Kentucky in 1970. No matter, I continue to see her in pedigrees among the descendants of Rainbow Quest and Warning.

Ragusa won the 1963 Leger by six lengths, and on that occasion I didn’t feel short-changed. He was a May 26 foal, still backward when he reached third place in the Derby, and he subsequently became a formidable runner whom I could appreciate for himself, especially for his Doncaster performance, as a result of which Timeform came to assess him as Noblesse’s superior.

And I owe Ragusa for launching me on another love affair. I have yet to miss a St Leger since he provided my initiation. 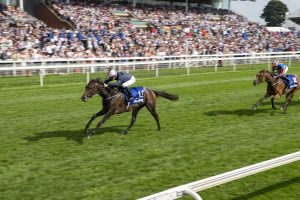