Juddmonte sire a real friend to the smaller breeder

At this stage last year, early crops by the Juddmonte stallion had yielded three stakes winners; 12 months on and that tally has risen to 13.

Bated Breath has always been useful. Winner of the Temple Stakes himself, he is a prolific source of winners and is a dependable influence when it comes to the sale ring. Aligned with a fee that has yet to rise further than £10,000 at Banstead Manor Stud means the son of Dansili has always been a friend to the smaller British breeder.

Yet, for all that his early representatives included the high-class juvenile Beckford, detractors of the stallion were quick to latch on to a paucity of stakes winners. After all, Bated Breath has never been one to lack for support, with his early crops consisting of a number of well-connected individuals produced by Juddmonte and outside breeders.

There are few greater levellers than racehorses, however, and Bated Breath has made a mockery of anyone who doubted him this season.

Daahyeh’s victory for Roger Varian in the Group 2 Rockfel Stakes at Newmarket last Friday marked the 15th stakes race won worldwide by his progeny this year. Along the way, there have been 11 individual stakes winners.

Worth Waiting, a Group 3 winner at three in 2018, got the ball rolling at Newmarket’s Guineas meeting in May with a facile success in the Dahlia Stakes.

An excellent Royal Ascot followed a month later, as Daahyeh took the Albany Stakes and Space Traveller won the Jersey. Another three-year-old, Biometric, captured the Royal Hunt Cup. First-crop representative Maid In India, meanwhile, has really come of age for Eric Alston this year, winning the Achilles Stakes at Haydock and World Trophy at Newbury. 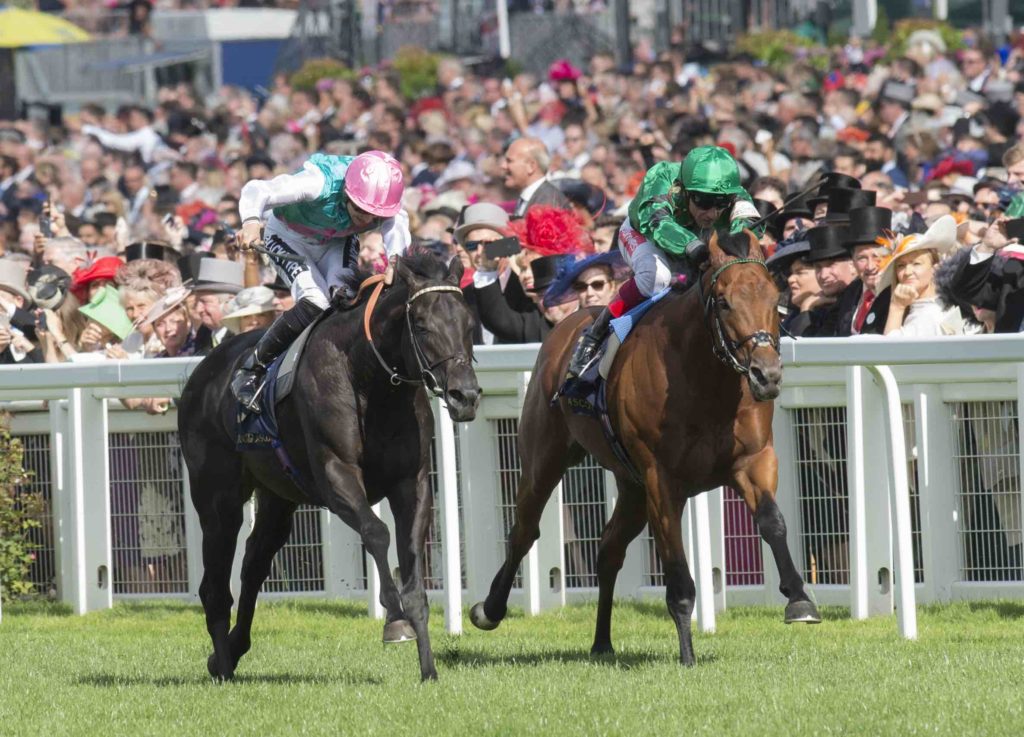 The latter victory was recorded less than two weeks ago and maintained a rich period for the stallion that also included Breathtaking Look’s breakthrough win in the Group 3 Sceptre Stakes at Doncaster and Space Traveller’s success in the Solonaway Stakes at Leopardstown.

Daahyeh’s win in the Rockfel, which followed a runner-up effort to Love in the Moyglare Stud Stakes, placed an exclamation point on his excellent autumn and consolidated his place among the top 12 British and Irish stallions of 2019.

Further afield, Listed successes have also been secured by Faccio Io and Les Hogues on the continent while over in America, he has been represented to excellent effect by the stakes-winning British-bred pair Simply Breathless and Feel Glorious. Greater things should also beckon for Jack And Noah, a purchase out of the Arqana breeze-up in May, who looked smart when landing his debut for Mark Casse at Belmont Park on Friday.

Daahyeh is out of an Oasis Dream mare – as is the Rockfel second Stylistique, herself by Bated Breath’s sire Dansili – and the product of the Peace family that has been cultivated to such good effect in recent generations by Juddmonte Farms. Such a background gives a real Juddmonte look to Daahyeh but she was actually bred by John Deer’s Oakgrove Stud, who paid 35,000gns for her dam Affluent while she was carrying the filly at the 2017 Tattersalls December Sale.

It proved to be a sound bit of business, as Daahyeh went on to sell for £75,000 to Oliver St Lawrence at the Goffs UK Premier Sale. Reflecting on what attracted him to the filly, St Lawrence told Owner Breeder magazine earlier in the year: “She’s a very attractive filly with a particularly attractive head, a good step and great quarters to her. I thought she looked fantastic at the sale and a credit to Oakgrove Stud. She also has a nice bit of pedigree – her dam was rated 90 and goes back to a good Juddmonte family.”

The Juddmonte-bred Affluent had indeed been a quick filly for Roger Charlton, winning her only start at two before scoring again over 5f at three. At the time of her sale, she had a winner to her name but had also endured her share of bad luck, with another two foals dying before they could reach the track. Daahyeh is the mare’s sixth foal and by far the best of her two winners to date.

Of course, in keeping with the majority of Juddmonte-bred stock, Affluent is extremely well related. She is a half-sister to the high-class sprinter Deportivo, whose six wins for Roger Charlton were highlighted by the Flying Five Stakes, as well as Supreme Stakes winner So Beloved.

They are out of Valencia, a placed Kenmare half-sister to Khalid Abdullah’s top American racemare Wandesta and the Prix du Conseil de Paris winner De Quest. In turn, Valencia is out of De Stael, also the fourth dam of this year’s Futurity Stakes winner and National Stakes runner-up Armory.

This family goes back to the Klairon mare Peace, who entered the Juddmonte fold during the early 1980s as part of a purchased package of mares belonging to John ‘Jock’ Hay Whitney.

Whitney had paid 16,000gns for Peace through trainer Jeremy Tree at the 1967 Tattersalls Houghton Sale when she came up for auction from Sir John Musker’s Shadwell Stud. It was a sizeable sum for the time and Tree appeared vindicated when she was the impressive winner of her debut, the Blue Seal Stakes at Ascot, nearly a year later.

Peace was made an ante-post Classic favourite off the back of that performance but that unfortunately was as good as it got; the subsequent 1,000 Guineas winner Full Dress had her measure in a Guineas trial back at Ascot on her return prior to underwhelming displays in the Lingfield Oaks Trial and Coronation Stakes.

Tree, however, was indeed vindicated in his choice as Peace latterly became an exceptional producer for Whitney, for whom she bred his 1976 Coronation Cup winner Quiet Fling and Sandown Classic Trial scorer Peacetime. 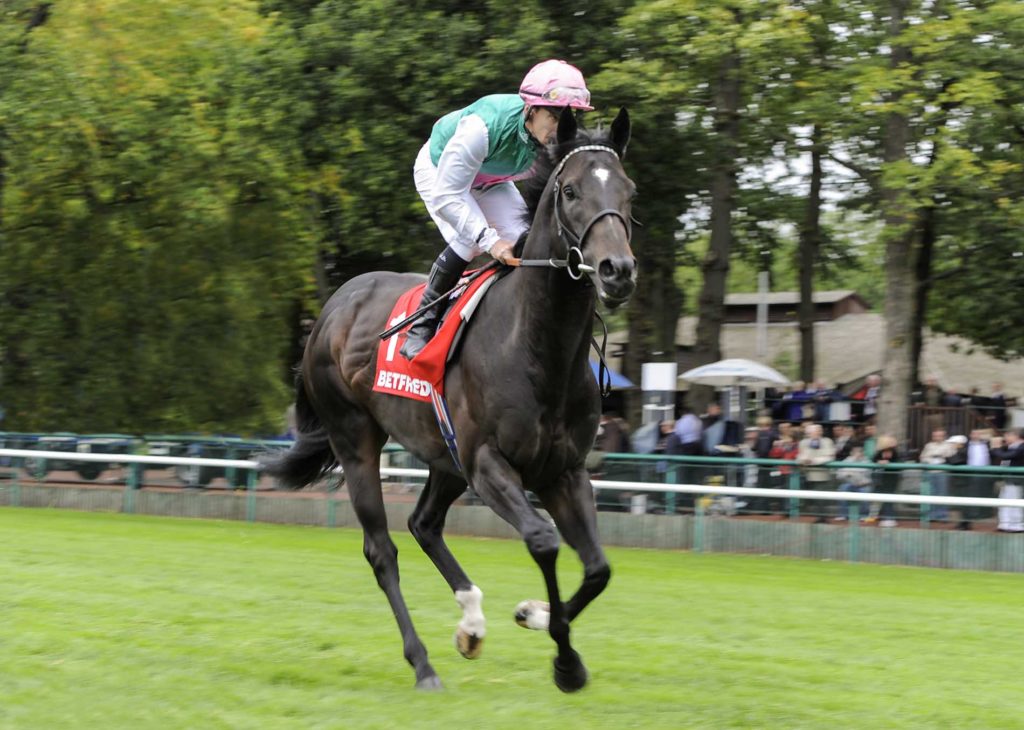 In time, this family has become greatly associated with Juddmonte, its success at times an important cog in the health of Khalid Abdullah’s operation.

For instance, one of Peace’s daughters, Cambridgeshire Handicap winner Intermission, became the ancestress of Juddmonte-bred Group/Grade 1 winners Midships, Continent and Zambezi Sun. Another, the Group 2-placed Balabina, is the ancestress of Byword and Proviso.

As the likes of Proviso, Zambezi Sun and So Beloved show, this family has long fared well when crossed with Dansili. Another granddaughter of De Stael, Pretty Polly Stakes winner Fashionable, also produced the Classic-placed Jack Naylor to Dansili’s brother Champs Elysees.

Not only that, the family has also historically reacted well to Nashwan and his paternal half-brother Rainbow Quest – Wandesta and Fashionable were both daughters of Nashwan – making it easy to see how Bated Breath, who represents Dansili over Distant View and Nashwan, became an appealing option for Affluent.

Daahyeh could be set for one more outing this year in the Breeders’ Cup Juvenile Fillies’ Turf. By a sprinter and out of a 5f specialist, she is not guaranteed to appreciate a truly run mile. But Santa Anita is quite different to the straight Rowley Mile of Newmarket and if she is to ever get away with it, then it will be in California. 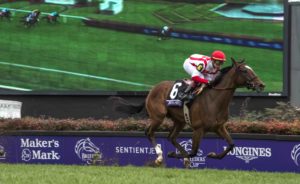 Up Next
North America turns to turf