Australia not solely devoted to speed

A one-two-three in the Melbourne Cup, not just for British-trained horses, but for British-breds. Proof, if proof were needed, that one thing we do very well in this part of the world is breed a good stayer.

The irony, of course, is that fewer and fewer people seem to want to do that, despite the embarrassment of riches on offer in this division worldwide for those with enough patience to give these horses the time required to show their full potential.

Though, given the fact that the last two Melbourne Cup winners, Rekindling and Cross Counter, were only three-year-olds when they scooped around £2.5 million in prize-money on the first Tuesday of November, we’re not really talking about reserves of patience far above the norm.

Increasingly though, the ‘norm’ is becoming to breed an early and, hopefully, fast two-year-old type, and the initial commercial rewards that can be gleaned at the foal or yearling sales is an understandable lure in increasingly cash-strapped times for breeders.

This trend which has taken hold here is far advanced in Australia, meaning that a number of buyers now head to Europe in search of staying stock to export. This is both good and bad.

Financially it can be massively beneficial to the horses’ owners and it continues to help to spread the word globally as to the strength of European bloodstock. On the downside, it means we potentially lose some of our best stayers to the other side of the world.

In order to redress this balance, the BHA and TBA has put plenty of thought into boosting the staying programme in Britain via a project launched two years ago which was discussed in detail in the September issue of this magazine. Early signs are encouraging with regard to support of these races by owners and trainers.

How well breeders will respond in their support of middle-distance stallions remains to be seen, though with the name Camelot at the head of the second-crop sires’ table for this year and some promising results for freshman stallions such as Australia, Sea The Moon and Ruler Of The World, there’s another hint that with enough support, stallions of this ilk can go on to deliver the goods in the more prestigious and valuable races as their offspring progress.

That is merely a perception and where these horses end up standing should not preclude any breeder with a good Flat mare from using them, even if it appears to be commercially risky.

The treble Group 1 winner Order Of St George has just joined the line-up at Coolmore’s National Hunt division, but on that list of 16 stallions are the sires of this year’s 1,000 Guineas winner and last year’s Derby winner. As always, it is a fine line between the Flat and the jumps.

Male Melbourne Cup winners that haven’t been gelded would also be viewed in this light in this part of the world but one who retired to stud in Australia in recent years is giving hope of a stayers’ renewal.

Fiorente, bred in Ireland by Ballymacoll Stud and a son of the German stalwart Monsun, stands at Sun Stud in Victoria for a fee of A$17,600 (approximately £10,000) and has made an eye-catching start with his first two crops of runners. In Australia’s second-crop sires’ table, he is second only to the extraordinarily successful Zoustar – who will shuttle for the first time to Tweenhills in 2019 – with Victoria Derby runner-up and Group 2 Moonee Valley Vase winner Stars Of Carrum among his notable runners to date.

In a recent interview with TDN AusNZ, Sun Stud’s Mark Lindsay said: “The Monsun line is such a dominant staying line in Europe, and we’ve seen them win Melbourne Cups. It was just a case of lack of opportunity down here for horses who are looking to get out towards 2,000m as a three-year old.

“When you are standing those sort of sires, there are very few two-year old races at a mile and above and then as a three-year old – you’ve only got ten or so races before Christmas where you can run over 2,000m and further.”

He added: “Australia has had this whole perception that Melbourne Cup winners don’t work at stud. The only reason for that is that we can’t get that zippy, fast two-year old that people are fascinated with…but there is hope there that the industry can focus on diversifying, not just on two-year-old speed.”

It’s an ironic paradox that while many breeders here aim to follow the Australian model of breeding for speed, some in Australia – particularly in Victoria, where Highland Reel has also been given a very warm welcome at Swettenham Stud – may be turning back towards our blueprint for stayers.

As Lindsay points out, the races have to be in place to give enough encouragement for owners and breeders that there are opportunities over and above the limited Cups programme.

In this regard, the Australian race planners would do well to peruse the boosted stayers’ programme painstakingly devised by Ruth Quinn and her BHA colleagues.

It may take time, but the change can only happen if the right races are there to act as an incentive. 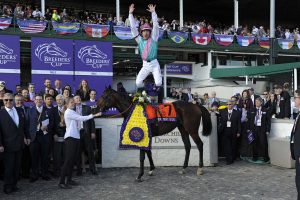 Up Next
Britain's success not unnoticed at ITBF AGM