There is currently a considerable and vociferous debate about the allocation of prize-money in Britain. The arguments about central support range over the whole spectrum: whether it should be steered more to the lower levels of racing, or spread more evenly across the programme, or be focused in a way that supports a meritocratic system.

The BHA-backed three-year funding agreement to spend more than £7 million of Levy Board cash on bolstering prize-money, including providing appearance money for lower-class races, runs out at the end of 2020. The principle has already caused disruption through its match-funding system, whereby a number of racecourses declined to make the equivalent contributions to meet the level required in 2019.

This is the system working, and match funding – or some form of incentivising prize-money – with racecourses has to be a sound way to use central contributions from the levy. However, if top-ups are made or the levels are set so low that every racecourse joins in and they are given extra money to achieve the overall objective, the exercise is pointless.

A more imaginative approach is required, but it needs to be realistic about available Levy Board funds. In my opinion, various levels should be set for different classes of racing, with the intention of achieving a proportionate buy-in from the racecourses. Larger tracks can no longer be relied upon to continue funding the better-quality races without some central support and encouragement.

A significant rise in Levy Board revenue after online bookmakers were brought into line with their onshore colleagues appeared to make the three-year funding agreement possible. However, contributions from the betting industry to the levy are expected to fall during 2019 and 2020, as shops close under the impact of government changes to fixed-odds terminal stakes and punters migrate to online betting where margins are smaller.

An inevitable consequence will be that prize-money contributions from the Levy Board will be lower, assuming other confirmed costs are met. If racing continues to believe £7m should be allocated to lower-class races and appearance money, levels further up the scale will have to suffer. Is this really what is required in a meritocratic system that should encourage progression and reward the racing of good horses?

Breeders plan and dream of producing horses to perform in the best races. We fully accept that our aspirations may not be reached and our horses will race at a lower level than we had hoped. We cannot expect to be as well rewarded for producing these horses, and their connections should only expect to be rewarded with prize-money commensurate with their ability.

The sport’s integrity depends on those who do their best being rewarded for success, while Britain’s international reputation relies on good horses being produced and raced in internationally competitive events here for levels of prize-money comparable worldwide. Evidence from betting forums and bookmakers’ research shows that quality races attract the highest interest from punters. Naturally, there are some people who will bet on nearly every race, but it is a proven fact that quality, high-end competition drives a considerable following.

Of course, the lower levels are important, but they must not be allowed to detract from the principle that the sport is built on a meritocratic and aspirational system, where the ethos is about being competitive and competing to win. It cannot be stressed strongly enough that the sport’s integrity depends on participants wanting to win. Anything that detracts from that will to succeed and climb the ladder should be rebuffed.

British racing will continue to thrive only via the success of the top races that attract international runners and the draw of major festivals. The best races need to be run under conditions and with prize-money that is competitive, while those racing in the middle tiers must also be rewarded proportionately.

We should continue to support a meritocratic system and, of course, dream of success. Nothing should be done to jeopardise the international standing of British racing, which excites everyone involved and does so much to bring inward investment into the country. 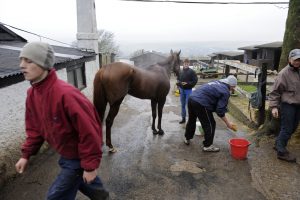 Up Next
Workforce well-being laid bare in studies