Enhancing the appeal of stayers and fillies is vital
Exclusive Columns

An anniversary gift from Tattersalls

It’s a safe bet that the person responsible for having the final say as to which yearling ends up in which book of the Tattersalls October Sale has one of the most thankless jobs in the industry. Diplomacy is number one on the list of requirements for the task, while a thick skin would also come in useful.

The Book 1 conundrum is one which has doubtless had the Tattersalls bigwigs scratching their heads over the years. Arguably, the three days over which Book 1 is held constitute the most important 72 hours in the European bloodstock industry.

Yet, despite a congregation of wealthy buyers from around the globe in Newmarket for that time, there’s been a reluctance from a number of breeders and vendors to assign their yearlings to that premier slot. This is perhaps through fear that the air is indeed so rarefied during Book 1 that anything bar the best both physically and on paper will struggle to find favour with a highly selective buying bench.

Well the head-scratching appears to have come up with a highly acceptable solution to the ‘all duck or no dinner’ perception of Book 1 with the introduction of the £25,000 Tattersalls October Book 1 Bonus. Launched last year, it has further enhanced the 250th celebrations of the firm by spreading plenty of extra cheer among those connections lucky enough to have benefited from winning one of the first wave of races this turf season.

The Tattersalls Millions series – valuable though it was – never really fired the imagination of owners and trainers, but the bonus races have been widely welcomed and it’s easy to see why. At the time of writing, 30 graduates of last year’s sale had claimed a £25,000 bonus, and while some were six-figure yearlings owned by some of the sport’s most powerful owners, a number sold for far more reasonable prices and have quickly recouped much, if not all, of that initial outlay for their connections.

Among the owners to have benefited recently is the Heart of the South Racing syndicate courtesy of the victory of the Marco Botti-trained Raven’s Lady in a fillies’ maiden at Kempton on September 19. 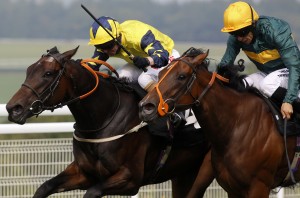 Kilmah, left, earned more for her maiden success than she did for a Group 3 victory

Speaking after the race, representative John Penny commented: “Raven’s Lady only cost 38,000gns at Book 1, she has just won almost £37,000 for winning her maiden and we think she could well be Group or Listed class. What a great scheme – we will be back looking for more Book 1 Bonus winners for Heart of the South Racing this year.”

Such an endorsement will certainly be music to the ears of Tattersalls’ Marketing Director Jimmy George, and this is far from the only notable example. The two least expensive bonus winners to date – Kilmah and Mistime – are both trained by Mark Johnston. Bought for 32,000gns, Kilmah won £37,028 on debut in May, which compares hugely favourably to the £22,684 she earned for subsequently winning the Group 3 Prestige Stakes at Goodwood.

Similarly, Mistime – a 28,000-guinea yearling – earned £29,528 for her maiden win and owner John Brown has already pledged that he will be reinvesting some of those funds at Tattersalls this year.

Give initiative a chance
While this initiative was quick to find favour, one which has been slower to catch on is the idea to frame races for the offspring of stallions standing in Britain for £15,000 or less, with a 3lb weight allowance for each £5,000 reduction in fee.

There has been consternation that the first two pilot races – run at Goodwood on September 21 and the following day at Newmarket – attracted fields of only nine and five respectively but this alone should not be a reason for the TBA and BHA, who worked together on this project, not to persevere in staging such races.

Tweaks to conditions may be necessary but the principle at the heart of the idea – to give smaller owners and breeders the chance to avoid clashing with some of the top-flight operations – is a sound one.

The early yearling sales have already confirmed the fears of many in the industry that, once again, the supply of thoroughbreds significantly exceeds the demand, and it is the lack of demand in the lower tiers which continues to be of most concern. Any incentives for owners to be given a fair chance to race what may be perceived to be lesser individuals should be considered and given a proper chance to succeed.

Up Next
Enhancing the appeal of stayers and fillies is vital